Accessibility links
Protest Raised over New Tests of Naval Sonar Federal regulators near a decision on whether to allow the Navy to test a new sonar, renewing tensions in a long-running fight over whether the sonar hurts whales. 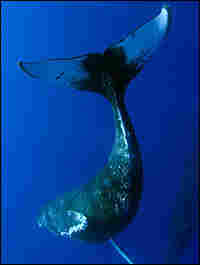 A long-running fight over whether a new Naval sonar hurts whales has flared up again as federal regulators near a decision on whether to allow the Navy to test the new sonar in most of the world's oceans.

Government biologists say the sonar poses little threat to whales. But environmentalists who disagree are trying hard to stop the Navy's plans.

In the language of the Navy, the new sonar is known as SURTASS-LFA. Hanging in the water underneath a Navy research boat, it doesn't look especially impressive. If you've been to a rock concert, you've seen much bigger speakers.

But this low-frequency sonar device outperforms every other sonar system in the world. Basically, it sends out blasts of sound that cover hundreds of square miles. The Navy built it to find submarines that slipped past older kinds of sonar. The Pentagon says that makes it essential to the national defense.

In a film promoting the new system, Ret. Vice Adm. Malcolm Fages said the system is critical as submarine warfare continues to proliferate.

But by some accounts, the very thing that makes SURTASS-LFA so useful may also be a threat to marine mammals. Biologists say it's possible that the energy pulses sent out by the sonar could make it hard for these animals to communicate, navigate or even reproduce.

Joel Reynolds of the Natural Resources Defense Council says other kinds of sonar have done just that. He says the Navy needs to do more tests to prove that the new system is safe.

"We simply can't allow the Navy to play Russian roulette with our oceans, but that's what the LFA system will do," Reynolds said.

Currently, the Navy is only allowed to test this sonar in an isolated part of the western Pacific. But they want to do much more, by putting the devices on four ships that would range over most of the world's oceans. In order to do that, the Navy needs a permit from the National Marine Fisheries Service. And last month, that agency proposed to grant it, concluding that the system posed a negligible threat to the health of marine mammals. Reynolds says that's a wild guess.

"The fact of the matter is they turn this system on and they have no real idea what it's doing because it goes so far they can't monitor it, much less regulate it," Reynolds said.

That's not an argument that seems to wash with the Ken Hollingshead, the National Marine Fisheries Service official who proposed to give the Navy the new permit.

He says the Navy has spent millions on research into the side effects of SURTASS-LFA since 2002. He says those tests seem to show that while some kinds of whales stop singing and swim away when the sonar waves hit, there's no evidence that these whales have been harmed in any way. He adds that his agency will make sure the Navy takes a lot of steps – from visual observers to passive listening devices — to insure that the sonar isn't even turned on when whales are nearby.

Critics say those are good ideas, but argue that they may not be enough to protect whales. They also say the fisheries service hasn't given the public enough time to respond to the new plan, which was unveiled just two weeks ago. The public comment period on the new proposal closed Tuesday. Hollingshead says the agency has gotten thousands of requests to extend it.

Hollingshead says he's considering those requests, but adds that the Navy's permits could be issued by the middle of August.