Accessibility links
Commissioner Says NBA Deserves Benefit of Doubt NBA Commissioner David Stern says the explosive allegations that a league referee bet on games are an isolated case. But he says the accusations about veteran referee Tim Donaghy represent the worst situation of his long tenure.

NBA Commissioner David Stern says the explosive allegations that a league referee bet on games are an isolated case. But he says the accusations about veteran referee Tim Donaghy represent the worst situation of his long tenure.

Stern made his first public comments about the betting scandal at a news conference Tuesday in New York City. 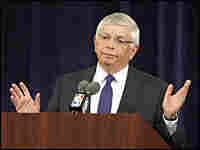 Basketball Commissioner David Stern on Tuesday said allegations that a former referee gambled on NBA games is an isolated case.

"Mr. Donaghy is the only referee alleged to have bet on NBA games and disclosed confidential information to others," Stern said at a news conference. "I'll say it again. I understand this is an isolated case."

The FBI is investigating former referee Tim Donaghy for allegedly betting on games — perhaps including those he officiated — during the last two seasons. He is expected to turn himself in at U.S. District Court in Brooklyn later this week or early next week, according to a person familiar with the investigation.

Stern also said Donaghy is accused of providing information to other gamblers.

betting on NBA games," he said.

Stern called it the "worst situation I've ever experienced, either as fan of the NBA, a lawyer for the NBA or commissioner of the NBA."

The FBI first contacted the NBA on June 20 to talk about a referee alleged to be gambling on games, and the two sides met on June 21, Stern said. Donaghy resigned July 9.

"Suffice to say, we would have liked to have terminated him earlier, but our understanding was the investigation would best be aided if we did not terminate Mr. Donaghy," Stern said.

But it was not the first time Donaghy faced gambling allegations.

Authorities are examining whether Donaghy made calls to affect the point spread in games on which he or associates had wagered thousands of dollars over the past two seasons, according to a law enforcement official. The referee had a gambling problem and was approached by low-level mob associates through an acquaintance, the official said.

"We take our obligation to fans in this matter very seriously," Stern said. "I can stand here today and pledge that we will do every look back possible to analyze our processes and seek the best advice possible to see if there are changes that should be made and procedures that should be implemented to continue to assure fans we're doing the best we possibly can."