Accessibility links
A Record Year For Pirate Attacks Despite international naval patrols in the Gulf of Aden and the Indian Ocean, Somali pirates continue to seize merchant ships and hold them for ransom. Analysts say that for poverty-stricken Somalis, the potential rewards far outweigh the risks.

A Record Year For Pirate Attacks

A Record Year For Pirate Attacks 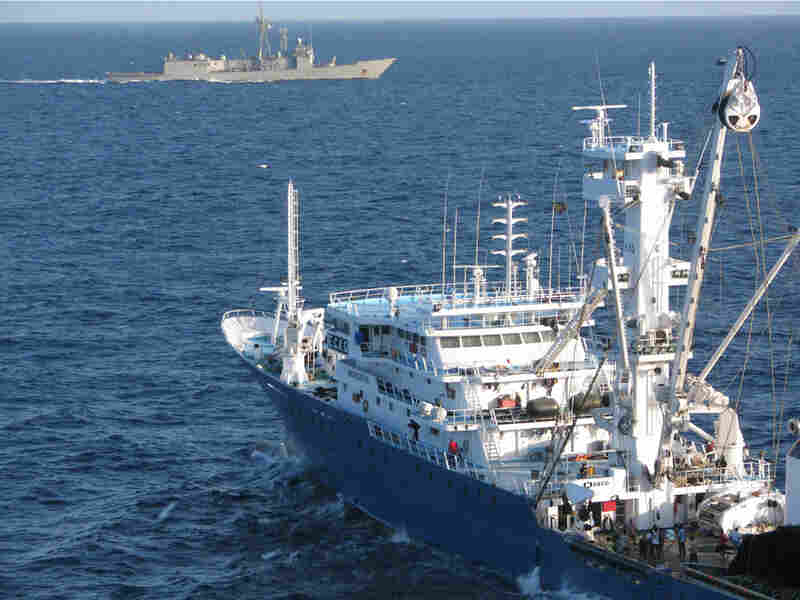 The Spanish fishing boat Alakrana was held by pirates for more than six weeks before it was released in November. It was one of more than 45 ships seized by Somali pirates this year. Spanish Ministry of Defense/Getty Images hide caption 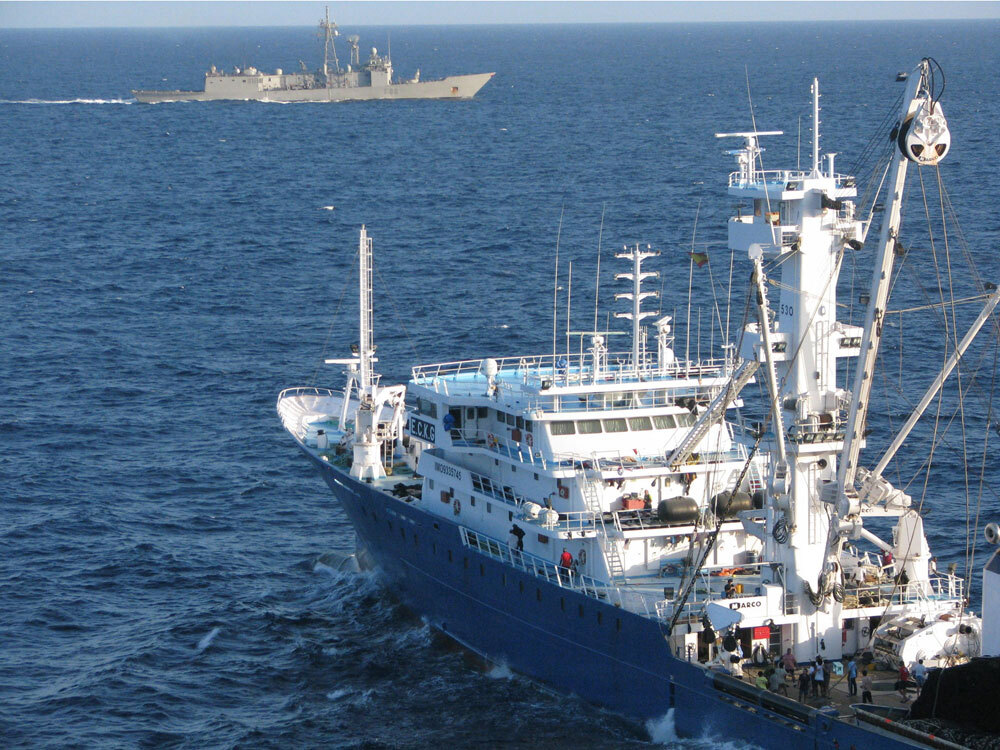 The Spanish fishing boat Alakrana was held by pirates for more than six weeks before it was released in November. It was one of more than 45 ships seized by Somali pirates this year.

Despite a year of beefed-up patrols by the world's strongest navies, piracy continues to be alive and thriving around the Horn of Africa and far out in the Indian Ocean. Analysts say the pirates appear to be better funded, organized and equipped.

On Sunday, Somali pirates released the De Xin Hai, a Chinese bulk carrier with about two dozen crew members that was captured Oct. 19. The Chinese government described the return of the vessel as a "rescue," but a Somali pirate claimed that he and his gang collected a $4 million ransom for the ship.

Chinese warships began patrolling the waters off Somalia last year, after pirates attacked an oil tanker on its way to China. Like the vessels of other navies, the Chinese concentrated mainly on the shipping lanes that pass through the Gulf of Aden, but they couldn't protect the much wider expanse of ocean between Africa and India.

Pirates attacked the De Xin Hai at a point more than 700 miles from the Somali coast. Chris Austen, the head of London-based Maritime and Underwater Security Consultants, said the pirates "are finding rich pickings out in the Indian Ocean."

Austen said he's not sure that the pirates are deterred, even in the heavily patrolled Gulf of Aden. "They're still pretty active there, because there's a high likelihood that they won't get caught," he said.

A Year Of International Naval Patrols

It's been almost a year since the U.S. announced the formation of an international naval force to patrol Somali waters. The effort, which included warships from the European Union, the U.S. and Japan, has produced some successes against the pirates.

In April, U.S. Navy SEAL snipers killed three Somali pirates and rescued Richard Phillips, the captain of the U.S.-flagged freighter Maersk Alabama, who was being held hostage after an unsuccessful attempt to hijack the ship.

But pirates still carried out a record number of attacks in 2009, according to the Piracy Reporting Center of the International Maritime Bureau. The center, based in Kuala Lumpur, said pirates attacked more than 200 vessels this year, and succeeded in hijacking at least 47 of them.

About a dozen ships are currently being held for ransom. They include a Greek-owned cargo ship and a British chemical tanker, both seized Monday by pirates.

To help counter the international naval presence, the pirates have gotten increasingly sophisticated, using electronic navigation systems, heavier weapons and fast attack boats. Austen said some pirate crews are leasing this equipment from organized crime bosses and warlords, who then expect a big cut of the profits when pirates ransom a ship.

"It's a moneymaking concern, and it has very, very large returns," said Austen.

Austen said his company consults with shipping companies on security, advises them on kidnapping and ransom negotiations, and helps arrange to get hijacked vessels safely back to port once they've been released. In general, the shipping industry still isn't taking security very seriously, he said.

"We've done some statistical research on the risk of hijack, and the risk is pretty low," Austen said. "So it's not an unreasonable approach to think that companies might be able to spend their money in better ways. But shipowners who do nothing are being irresponsible."

Give Guns To Merchant Sailors?

One suggestion has been to arm the crews of ships that sail in pirate waters, but Austen says that's an option that needs to be carefully thought through. "Putting arms into the hands of people who aren't used to using them is a dangerous thing," he says. "It's not a good idea to arm sailors unless you're going to give them very thorough training."

The security consultant said the problem of piracy won't be solved until countries such as Somalia and Yemen achieve a measure of stability and prosperity. For now, he says, piracy has become "part of the infrastructure of communities" in Somalia.

Until the international community and the Somali government can compete with that kind of economic power, Austen said, it's unlikely that the coming years will see any significant drop in Somali piracy.