Accessibility links
In This Decade, Every Room Is A Screening Room TV viewership is up 20 percent — and Americans have grown increasingly addicted to a whole range of new screen sizes, from pocket game systems to smart phones. At any given moment of the day, 1.6 million people in the United States are using a video game console, according to Nielsen. 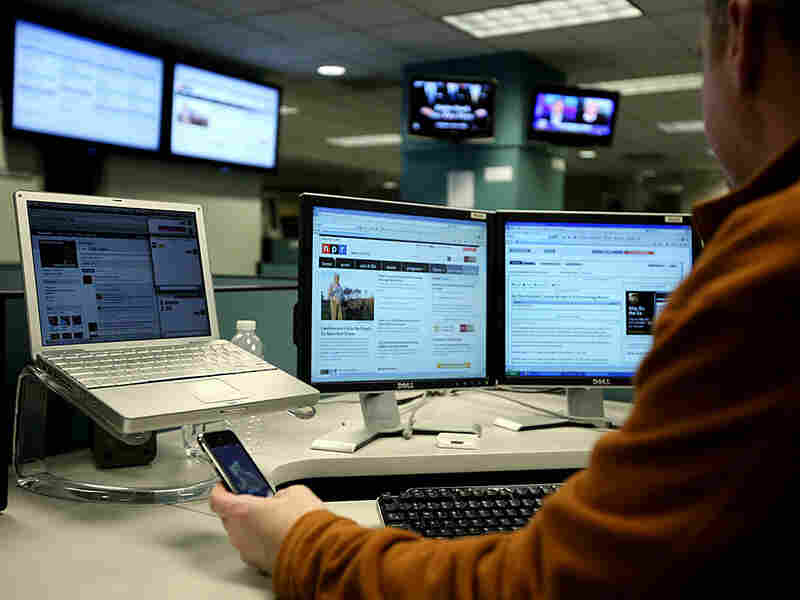 Work, Play: Facebook on the laptop, Lolcats on the iPhone, an early version of this story on the desktop and a lifeline to the outside world on those TVs — it's more or less an average day in the NPR newsroom. Photo illustration by Claire O'Neill/NPR hide caption 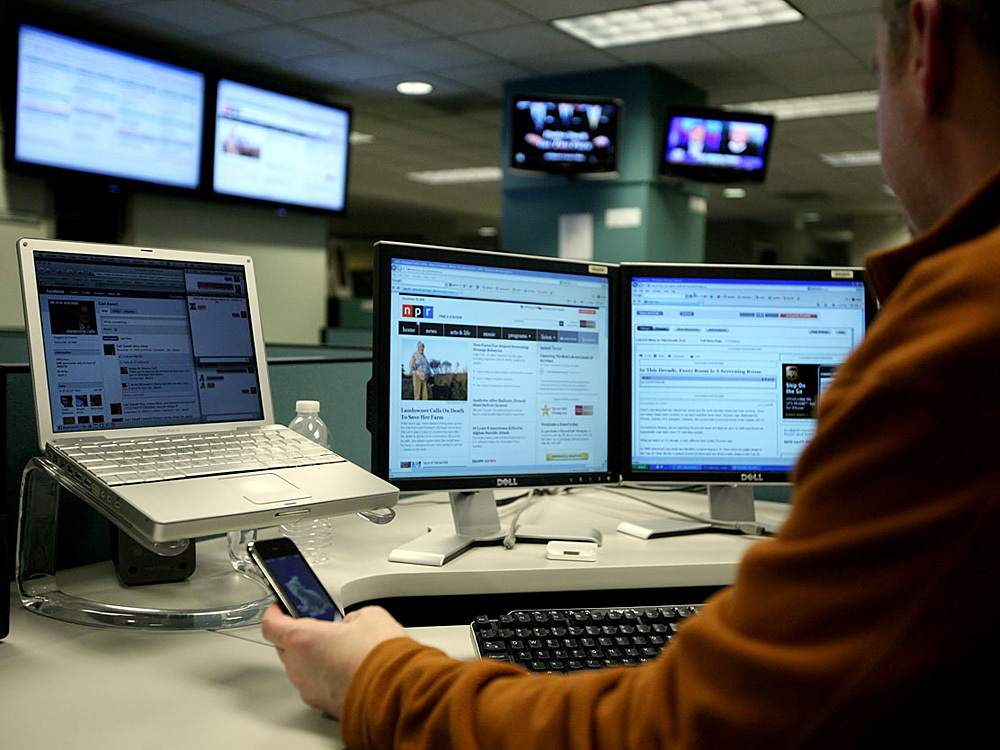 Work, Play: Facebook on the laptop, Lolcats on the iPhone, an early version of this story on the desktop and a lifeline to the outside world on those TVs — it's more or less an average day in the NPR newsroom.

Here's one thing that has stayed the same over the past decade: Americans love screens. There are many, many more screens in our lives now than there were 10 years ago: Nintendo DS, iPhone, Garmin GPS navigator. However, the screen that is most pervasive is the regular old TV.

According to Nielsen, we are watching 20 percent more of it than we were in 1999, and American households now have more TV sets than people.

What we watch on TV, though, is very different than it was 10 years ago.

All 20 of the highest-rated shows are still shown on the big broadcast networks, but this was also the decade that saw the rise of cable TV. The vast majority of American homes — 90 percent of them — subscribe to cable or satellite now, which means almost all viewers have access to thousands more shows than they did 10 years ago.

With hits like The Daily Show, The Sopranos and ESPN's Monday Night Football, cable is beginning to give the broadcast networks a run for their money in the ratings. Just recently, the eccentric detective show Monk on cable's USA Network easily beat out its time-slot rivals on the broadcast channels.

Even though 98 percent of our video consumption is on that regular old TV, many of our new screens seem to have a lure we can't resist, says Time magazine critic James Poniewozik — even when we are otherwise busy.

"My iPhone is in my pocket," he says. "I feel a tremendous pull to check my Twitter feed."

Consultant Juan Tornoe, who studies the Latino market in the U.S., doesn't see his phone as a screen, but as a "window to the world." He says cell phone usage is huge among Latinos — and their user habits are sophisticated.

"You're not only connected to friends and family, you get access to information," he says. "You get to send and receive e-mail. You get to participate in social media, listen to music, you name it."

Tornoe's window to the world is wide open, and that really appeals to Poniewozik. He says that 10 years ago, he'd write an article and have no idea what readers thought of it. No more.

Get this: At any given moment of the day, 1.6 million people in the United States are using a video game console, according to Nielsen. Include in that number the likes of Vicky Ellenburg, a first-grade teacher in Birmingham, Ala. In 1999, she had just one computer at home that she used to play solitaire. Today she plays Rock Band with her grandsons on her Wii.

"We actually stayed up until midnight until Walmart got them in, and then we played it until 4 in the morning," she says. Americans spent close to $19 billion on video games this year, almost triple the amount in 1999.

"Any free time we have, we're outside playing with the dog," says blogger Jessica Valenti. The computer is her livelihood; she runs Feministing.com. She's living one of the decade's other realities: the impact of screen time on relationships.

Valenti and her husband both spend a lot of time working online, and that got in the way of their marriage.

"We'd find ourselves with our laptops open from 7 in the morning until midnight, 1 a.m.," she explains. "Even if we were eating. I think we both recognized that's just not a really present way to be with each other."

So they made a rule: By 8 p.m., the laptops must be shut down and the cell phones turned off.