Accessibility links
Collector Unearths Small-Label Soul Rarities, Musicians Who Made Them A recently unearthed trove of rare funk 45s proved so obscure that the DJ who found them, Kevin Coombe, decided to catalog the music himself. That led him to create DC Soul Recordings, an online database of historic Washington, D.C., and Maryland funk and soul. Then he started finding the musicians who made the records. 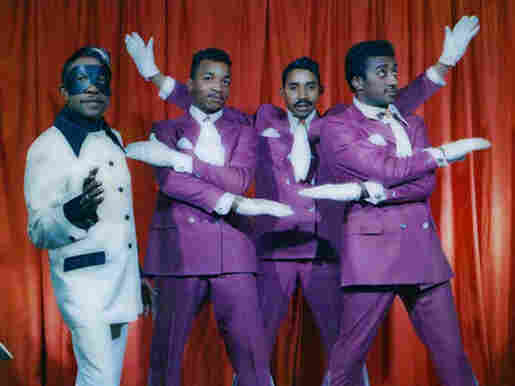 Pre-Madonna Vogue: Maskman and the Agents was a Washington, D.C., soul group led by Harmon Bethea. courtesy of the artist hide caption

He says he doesn't buy records as trophies to hang on his wall, or even just to collect; instead, he looks for independent funk and soul music that's good for dancing and parties. He's a DJ and record trader in the Washington, D.C., area, and some of his records are really rare -- 45s from local funk and soul bands released in the 1960s and '70s.

"Often, guys would press up 200, 500 copies," Coombe says. "Then they would drive around with it in their trunk, you know, at shows -- give it to people. So it would often never even leave the area."

Coombe unearths some of this lost vinyl on eBay, in flea markets or in tiny shops like Som Records. Owner Neil Becton keeps an eye out for any used 45s or LPs that come in that might interest Coombe.

But if he wanted to find out anything else about the artists or their music, Coombe quickly realized he'd have to do the research himself. There exists no collective history of the funk and soul scene that took place in the 1960s and '70s in Washington, D.C.

The first one-time funk and soul artist Coombe found was Gilbert "Butch" Pryor from the group The Sounds of Shea. It went so well that Coombe continued to track down the musicians he liked and interview them.

What resulted is Coombe's online database, DC Soul Recordings. It catalogs local music from the bygone funk and soul era, and contains pictures and history of the artists. Coombe says he plans to write a book with his research.

Another artist Coombe has rediscovered is keyboardist George Smallwood. Coombe has helped to plan one live show for Smallwood in the D.C. area and says he hopes to do more.

Smallwood expresses gratitude for Coombe's interest in his music.