Accessibility links
Preventing Diabetes: Small Changes Have Big Payoff Tim and Paul Daly are identical twins. They shared almost everything in childhood, including the genes that predisposed them to diabetes. But, because of small differences in exercise and weight, one brother developed diabetes and the other did not. 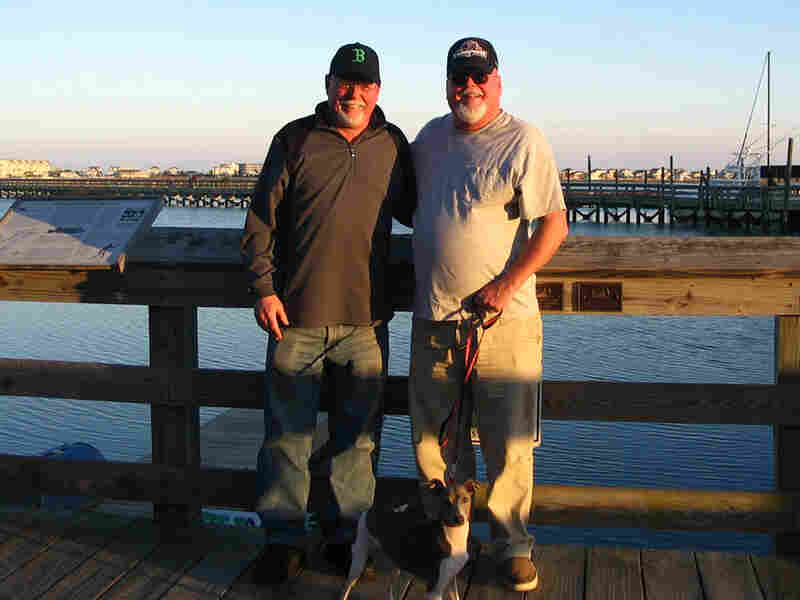 Specialists say eating well and exercising are incredibly effective in helping to manage Type 2 diabetes and pre-diabetes. For Tim (left), losing 14 pounds brought his blood sugar down from pre-diabetic to the normal range. His twin, Paul, works to manage his diabetes with exercise. Courtesy Tim and Paul Daly hide caption 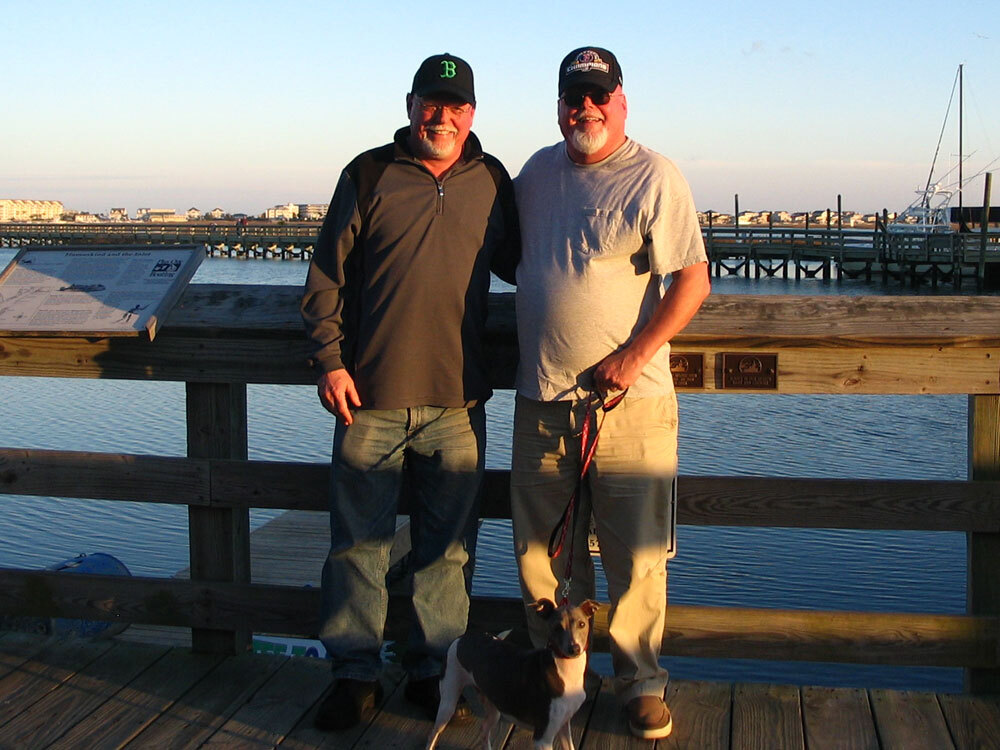 Specialists say eating well and exercising are incredibly effective in helping to manage Type 2 diabetes and pre-diabetes. For Tim (left), losing 14 pounds brought his blood sugar down from pre-diabetic to the normal range. His twin, Paul, works to manage his diabetes with exercise.

If it's hard to imagine how small differences in lifestyle can make a big difference in your health, consider this story of identical twins Tim and Paul Daly. They shared almost everything in childhood, including the same eating habits, the same love of basketball and the same genes — some of which predispose them to diabetes.

Back in 1996, one of the twins was diagnosed with Type 2 diabetes.

"When you first get diagnosed, it's like a punch in the stomach," says Paul Daly, who is now 60.

Or it's a wake-up call — if you're the identical twin. Since the disease runs in families, it seemed almost a certainty that Tim would develop it, too.

"Because we know that Type 2 is genetic disease, and since he has an identical twin, he has a risk that's about 95 percent," says diabetes expert Dr. David Nathan of Massachusetts General Hospital.

But 14 years later, Tim still does not have diabetes. And he doesn't take any medicine to keep his blood sugar down. Instead, he has been able to make small changes to his eating habits and exercise to keep diabetes at bay. He isn't alone — a large national study conducted at 27 sites around the country, including Massachusetts General Hospital, found that small lifestyle changes are far more successful at warding off diabetes than a drug.

Overweight And At Risk

Both Daly brothers had gained weight in middle age. It's just that one gained more than the other. In 1996, when he was diagnosed with diabetes, Paul weighed 220 pounds — too much for his 5-foot-10-inch frame. Looking back, Paul says he hadn't stuck with much regular exercise.

By comparison, Tim was still playing Tuesday-night hoops games with friends. The year his brother was diagnosed, Tim topped the scale at about 200 pounds.

At the time, neither brother realized how closely Type 2 diabetes tracks with obesity. Still, they both set out to drop some weight.

A Lifestyle Change, Not A Diet

Tim wasn't stoked about giving up the foods he loves — or his regular beer-and-pizza outing after his weekly golf game.

"Can you imagine telling someone they can never have another french fry or potato chip? It's like people will give up right away!" Tim says he recalls thinking.

But to his surprise, the changes he needed to make were not as drastic as he feared.

"It's not that different from many of our other patients," says Nathan. When people lose weight, their blood sugars respond favorably.

Tim volunteered to take part in a huge national research study aimed at determining exactly what it takes to prevent or delay the onset of Type 2 diabetes.

Like him, all of the 3,234 volunteers in the study were at high risk of developing the disease. The volunteers were broken down into three groups.

Tim was randomly assigned to the "lifestyle intervention" group. He received intensive counseling from a dietitian and motivational coach who helped him develop a plan to eat less and exercise more.

A second group of participants took a diabetes medicine called Metformin twice a day. These volunteers received information about diet and exercise, but they didn't get motivational counseling. A third group received placebo pills instead of Metformin.

Researchers wanted to know which intervention would work best to prevent diabetes and all of the complications that can develop as a result: loss of vision, kidney failure, amputations and a substantial increase in risk of heart disease and stroke.

As it turns out, the study found lifestyle changes to be twice as affective as the medicine.

Two-And-A-Half Hours Of Exercise A Week

During Tim's first appointment with his coach back in 1996, a blood sugar test showed he was pre-diabetic — meaning his blood glucose levels were higher than normal but not high enough for a diagnosis of diabetes. Pre-diabetes is also called impaired glucose tolerance (IGT) or impaired fasting glucose (IFG).

At that appointment, he was given two specific goals:

"He needed to lose 14 pounds [7 percent of his body weight], and he needed to reach a target of exercising for 150 minutes per week," explains Linda Delahanty, a registered dietitian at Massachusetts General Hospital.

His standing appointment with Tuesday-night basketball accounted for the first 60 minutes of exercise. But he needed to step it up.

So he added some brisk walks and jogging a couple of miles a few times per week. He also made a change during his weekly golf game. He began walking the course instead of riding in a cart.

During a recent game in Framingham, Mass., just before the first snowfall, Tim's brisk pace combined with the work of lugging his clubs gets his heart rate up in the moderate range for exercise.

"Look at this — that's a heck of a shot," he calls over to his friend. It's hard to hear the thwack of the ball being hit with all the laughing and joking.

"I come out here with my buddies, talk about life, enjoy the scenery," he says. It's one of the great pleasures of his life.

Tim says learning to build more exercise into his week was not as challenging as learning to eat small portions all the time. But he learned to make that a habit, too. For instance, he knows the rule of thumb on portions of meat: Each serving should be no bigger than a deck of cards. And what about chips?

Over time, all of these small changes led to something more significant than just getting down to his goal weight.

"Losing that 14 pounds actually caused his blood sugar to revert to the normal range from the pre-diabetes," Delahanty says.

People think they need to lose 50 pounds or 100 pounds, Delahanty says, but in this case, just 14 pounds made the difference. And this was typical of the participants in the Diabetes Prevention Program. Losing 7 percent of their body weight helped the volunteers in the study to cut the risk of diabetes by nearly 60 percent.

"Small steps can result in really large benefits," Nathan says. "Just doing a little more will help enormously to prevent this. And that's what the Diabetes Prevention Program showed."

Nathan says the Daly twins are not an anomaly. Eating better and exercising is incredibly effective in helping to manage Type 2 diabetes and pre-diabetes. Though Paul Daly is living with the disease, he has been able to make progress by stepping up his daily walks. His battle is tougher than his brother's, so he has vowed to try harder. And there is now strong evidence that exercise — even in the absence of weight loss — can help improve blood sugars.

The brothers say nothing has changed since their childhood days when they defended each other from a playground bully.

"We have that special bond," Tim says. "We look out for each other," Paul adds. They're fighting diabetes together. "And we're going to win it," Tim says.

It's the kind of attitude that makes Nathan hopeful.

"We have 1.6 million new cases of diabetes per year," he says, and it's possible to prevent the onset of hundreds of thousands of these cases.

Nathan says it's not clear if Tim will be able to keep diabetes at bay for the rest of his life. "We're still studying that."

So far, what he can say with certainty is that that maintaining the weight loss and exercise can successfully prevent the onset of the disease for more than a decade. In the follow-up study to the Diabetes Prevention Program, one-third of those at highest risk of the disease are still diabetes free.

He says an epidemic could begin to be reversed if lots and lots of people made these small lifestyle changes — and sustained them over time.