When Peter Ilyich Tchaikovsky composed his opera The Tsarina's Slippers, based on Gogol's story "Christmas Eve," he came up with something he had never managed before: an operatic comedy. It was his one and only comic opera, and somehow, that doesn't seem surprising

In her first-act aria, Oxana (soprano Olga Guryakova) wonders if she'll ever find true love — not yet realizing that the love of her life, Vakula, is ready and willing.

As Act Three begins, Vakula (tenor Vsevolod Grivnov) is so upset by Oxana's teasing that he's ready to kill himself. Alone on the banks of an icy river, he sings her a sad farewell. 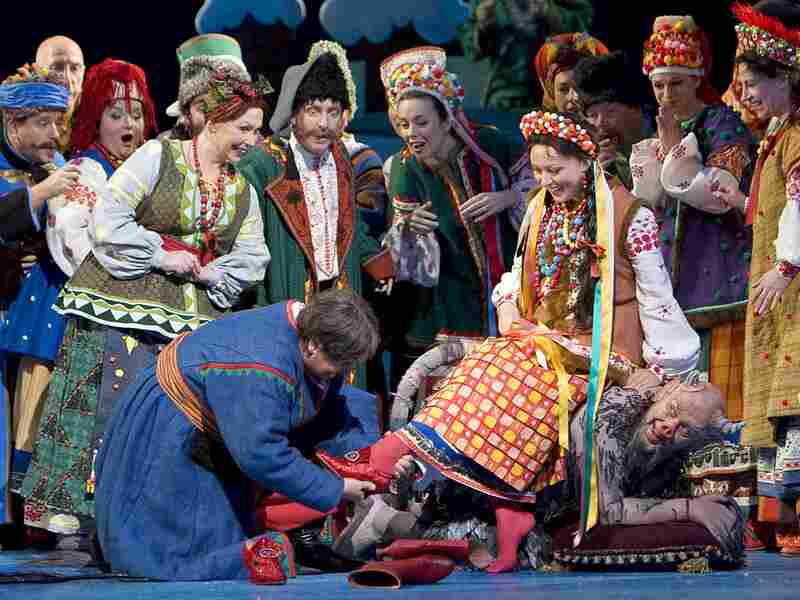 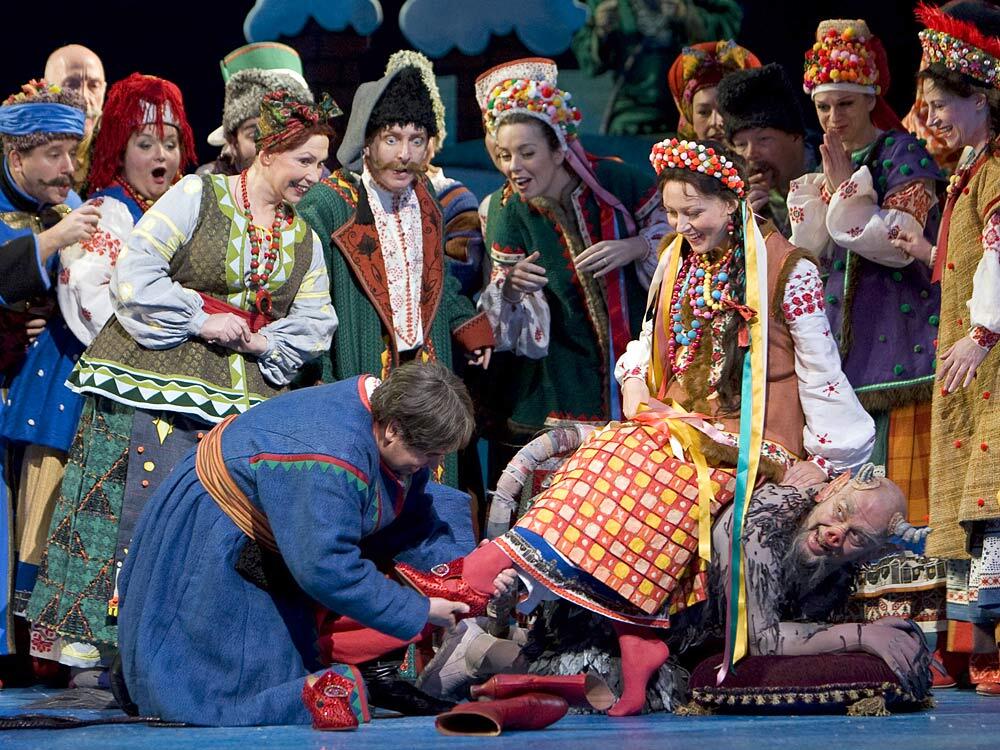 Vakula (Vsevolod Grivnov) helps his true love Oxana (Olga Gurykova) with her new slippers, while she uses The Devil (Maxim Mikhailov) as a stool, in Tchaikovsky's opera, performed at Covent Garden.

In many respects, Tchaikovsky's life was difficult and troubling. His internal struggles with his own sexuality are well known and hotly debated. His one marriage ended almost before it began, and its unhappiness led him to wade into the icy Moscow River in what may have been a suicide attempt.

One of his most famous works, the Symphony No. 4, begins with an ominous theme that's become known as the "fate motif." The subject of fate seemed to intrigue the composer; he once said that when confronting fate, a person's only choice is to "submit to it and lament in vain."

Tchaikovsky put his own lamentations front and center in his work. His well-known sixth symphony, called the Pathetique, is surely among music's most eloquent cries of anguish. Of Tchaikovsky's operas, the two most frequently seen onstage are both tragic psychodramas: Eugene Onegin and The Queen of Spades.

Yet there was a friendlier side to Tchaikovsky's musical personality. Every year at holiday time, children all over the world marvel at his whimsical ballet, The Nutcracker. And The Tsarina's Slippers, with a story based on a fanciful folk tale, is surely one of Russian opera's most charming comedies.

The opera began life in the mid-1870s with an entirely different title, Vakula the Smith. It was written for a competition sponsored by the Mariinsky Theatre in St. Petersburg. To meet the contest's deadline, Tchaikovsky cranked out the score in just six weeks -- only to discover that he had misunderstood that deadline, and could have taken an additional six months.

Still, Tchaikovsky was happy with the opera, and it did win the competition. But the premiere got a cool reception. So, about 10 years later, Tchaikovsky revised the score extensively and gave it its new name. It never did achieve the success he had hoped for, but late in life he still called The Tsarina's Slippers the best of all his operas.

On World of Opera, host Lisa Simeone presents a colorful production from London's Royal Opera House, Covent Garden. It stars tenor Vsevolod Grivnov as the young man Vakula, and soprano Olga Guryakova as Oxana, the love of his life.

The Story of 'The Tsarina's Slippers' 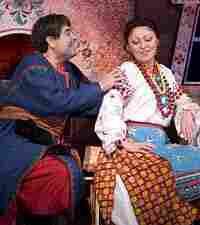 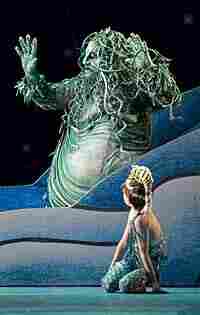 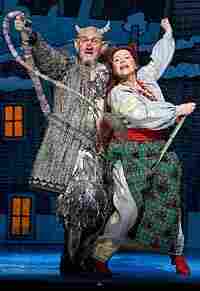 The story is set in a small, Ukrainian village, and takes place at Christmas time. As ACT ONE begins, we meet a woman called Solokha, a sort of self-styled witch. She's the mother of the young man Vakula.

We also meet a character known as The Devil. He's not the Devil, as in Satan himself. Instead, this is a sort of low-rent, local devil. He's got his eye on Solokha, saying that she's "hot stuff," and the two do a dance.

But The Devil also has another agenda. He's unhappy with an unflattering picture of himself that Vakula has painted on the walls of the church, and he decides to get even.

His plan is to kidnap the moon, and whip up a big snowstorm. Vakula is planning to visit his girlfriend, Oxana, that evening, while her father is away. The Devil figures that if the storm is bad enough, Oxana's father, a Cossack named Chub, will be forced to stay home — ruining Vakula's chances at an amorous encounter.

But The Devil underestimates Chub's resolve; the Cossack leaves home anyway, heading to a local inn for a few drinks. When he's gone, Vakula appears outside Oxana's window. Oxana lets Vakula into the house, but when he tries to kiss her, she decides to tease him, and pushes him away.

Chub eventually comes home, incredibly drunk. Vakula doesn't recognize him, and sends him back into the street. This prompts Oxana into more teasing. She tells Vakula that she's found another, far more desirable lover. Vakula has had enough, and says good riddance. But when he's gone, Oxana admits to herself that while she enjoys tormenting Vakula, she's actually in love with him.

ACT TWO opens at Solokha's house. She and The Devil have a bit of a tryst going, and have just returned from an invigorating broomstick ride. Solokha slowly removes her jacket, and does a seductive dance with The Devil's tail.

But they're interrupted when someone knocks at the door. It's Golova, the mayor. Solokha lets him in, while The Devil quickly hides in a sack. The mayor also has eyes for Solokha, but as he begins his own attempts at seduction, there's another knock at the door. This time it's the schoolmaster, another of Solokha's admirers. And as he enters, it's the mayor's turn to dive into a sack. And the procession isn't over. When Oxana's father Chub arrives, Solokha finds another sack for the schoolmaster. And when Vakula comes to visit his mother, she has to find a fourth sack for Chub to hide in.

Vakula takes a quick look around. The Christmas celebration is coming up, and he thinks they'll need more room in the place. So he decides to haul the sacks away — complaining at how heavy they are.

Outside, villagers have gathered to dance and sing carols. When Oxana arrives, all the men are quickly drawn to her. But she has her eyes on Vakula, who is still carrying sacks. Oxana admires the beautiful new shoes worn by one of her friends — and wishes someone might get her a pair just as nice. Vakula overhears, and offers to buy them for her, but Oxana is still playing hard to get. She says that she won't settle for just any shoes. She wants something special — a pair of slippers just like those worn by the Tsarina herself.

Vakula decides this demand is impossible to meet, and says he might as well just kill himself. He trudges off, dragging one sack behind him. The villagers think the other three sacks must contain food for the Christmas party. So as the act ends, they rip them open, only to find three very embarrassed men — Chub, Mayor Golova and the schoolmaster.

ACT THREE begins beside an icy river, where some water nymphs are talking to a wood goblin. He tells them that a young man is on his way to the river, to drown himself.

Before long, the despondent Vakula shows up, still dragging the heavy sack that he took from his mother's house. Standing by the riverbank, he sings a sad goodbye to Oxana. But before he can jump into the water, The Devil pops out of the sack and stops him.

The Devil says that he can help Vakula win Oxana over — in exchange for Vakula's soul, of course. But, while this Devil does have some supernatural powers at his command, he's also a bit weak-willed.

At first, Vakula agrees to give up his soul. Then he grabs The Devil by the tail, throws him to the ground and demands to be taken to the Tsarina's palace. Humbled, The Devil agrees. Vakula climbs on his back, and the two fly off to St. Petersburg.

When they arrive at the palace, there's a great ball in progress. It's Christmastime. The prince is celebrating a military victory, and everyone's in good spirits. Vakula is introduced to the prince and begs for a pair of the Tsarina's slippers, as a gift for his sweetheart. The prince is charmed by the request, and agrees. With the slippers in hand, Vakula and The Devil head back to the village.

But at home, as ACT FOUR begins, Oxana and Solokha are in mourning. They haven't seen Vakula for days, and decide that he really has jumped into the icy river and drowned. The villagers are preparing the Christmas feast, and invite Oxana to join them. She turns away, weeping.

But suddenly, Vakula makes a grand entrance, carrying a velvet bag. He opens it, produces some presents for Chub and asks for permission to marry Oxana. Then he reaches into the bag again, and shows her the Tsarina's slippers. Oxana is pleased but says she really doesn't need them after all: It's Vakula she wants, and not a pair of fancy shoes. The two declare their love, and the villagers all whoop it up as the opera ends.