Accessibility links
House Health Bill Would Help Pacific Island Migrants Legislation would restore Medicaid rights to citizens of the Marshall Islands and two other nations who have the unique ability to travel and work freely in the United States. 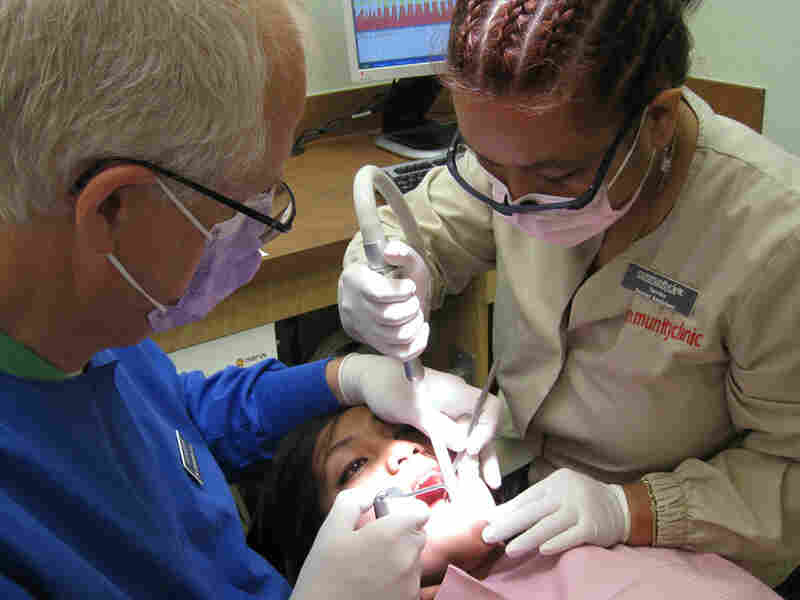 A Marshallese teenager gets her molars sealed at the dental office of St. Francis House in Springdale, Ark., a community health clinic that sees about 1,000 Marshallese patients a year. Jenny Gold/KHN hide caption 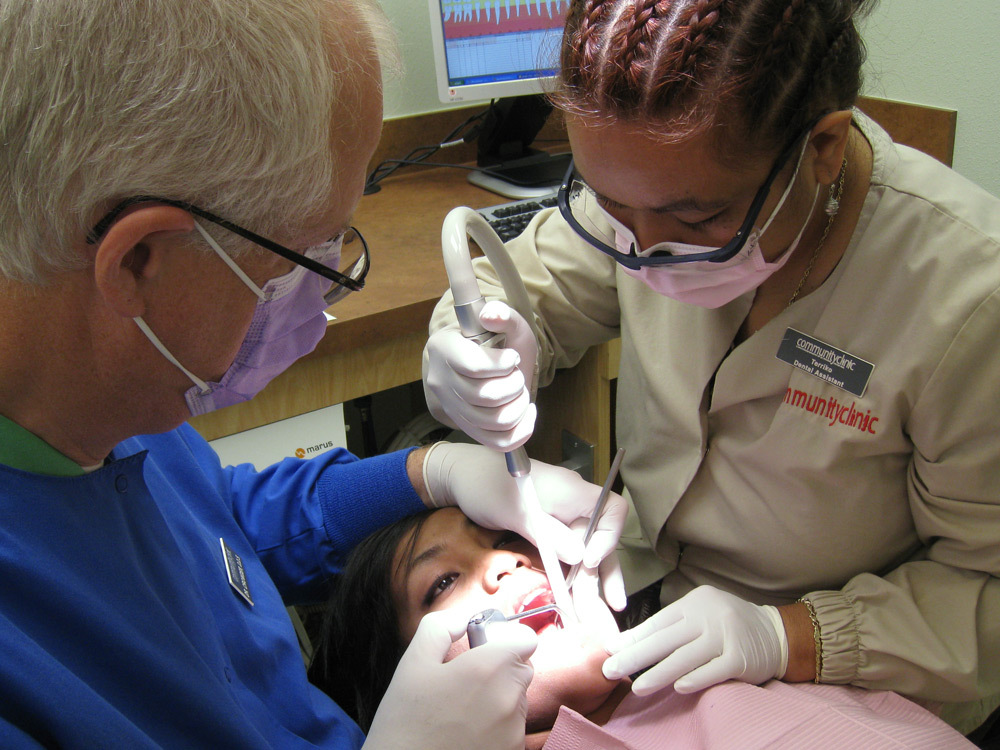 A Marshallese teenager gets her molars sealed at the dental office of St. Francis House in Springdale, Ark., a community health clinic that sees about 1,000 Marshallese patients a year.

Here in the self-described "chicken capital of the world," an enclave of unlikely migrants — 6,000 people from the Marshall Islands — is watching the health care debate with heightened interest.

Under an accord negotiated two decades ago involving three Pacific Island nations, the Marshallese can travel and work freely in the United States. But many have low-paying jobs and high numbers are uninsured.

Years ago, they were eligible for immediate coverage under Medicaid, the federal-state health insurance program for the poor, but that benefit was revoked in 1996 as part of welfare reform. The result is they aren't eligible for Medicaid — even after the five-year waiting period that applies to most other immigrants.

That's unfair, say advocates who argue that the Marshallese are contributing to the American economy by working and paying taxes and should have the same access to government programs as other legal immigrants. "It's like going to a party and you're bringing your potluck dish of rice and fried chicken and fried fish, but you're not eating anything," said Marshallese Consul General Carmen Chong.

Now, the health care legislation being debated in Congress might provide some relief. Under the House bill, a little-noticed provision sponsored by Rep. Neil Abercrombie, D-Hawaii, would restore the migrants' eligibility for immediate Medicaid coverage. The Senate bill doesn't have a similar provision.

Besides the Marshallese, the House provision also would apply to migrants from the Federated States of Micronesia and the Republic of Palau. The three strategically located archipelagos about 2,000 miles southwest of Hawaii came under U.S. control following World War II as part of a United Nations-designated trust. The United States created military installations in the region and used several of the Marshall Islands as nuclear test sites.

The three nations received their independence in the 1980s and agreed to host U.S. military facilities. In exchange, their citizens are allowed to work in the United States without a visa.

Rough estimates suggest there are about 20,000 islanders from the three countries living in the United States, mostly in Hawaii. There are no estimates of how many are uninsured. 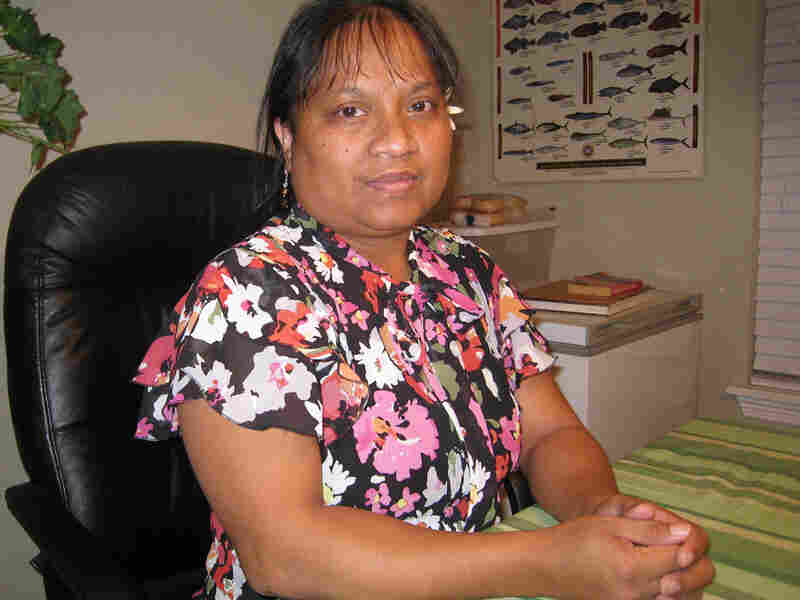 Consul General Carmen Chong Gum sits in the kitchen of her home in Springdale, Ark. Gum says the Marshallese work and pay taxes in the U.S., and therefore should have the same access to government programs as everyone else. Jenny Gold/KHN hide caption 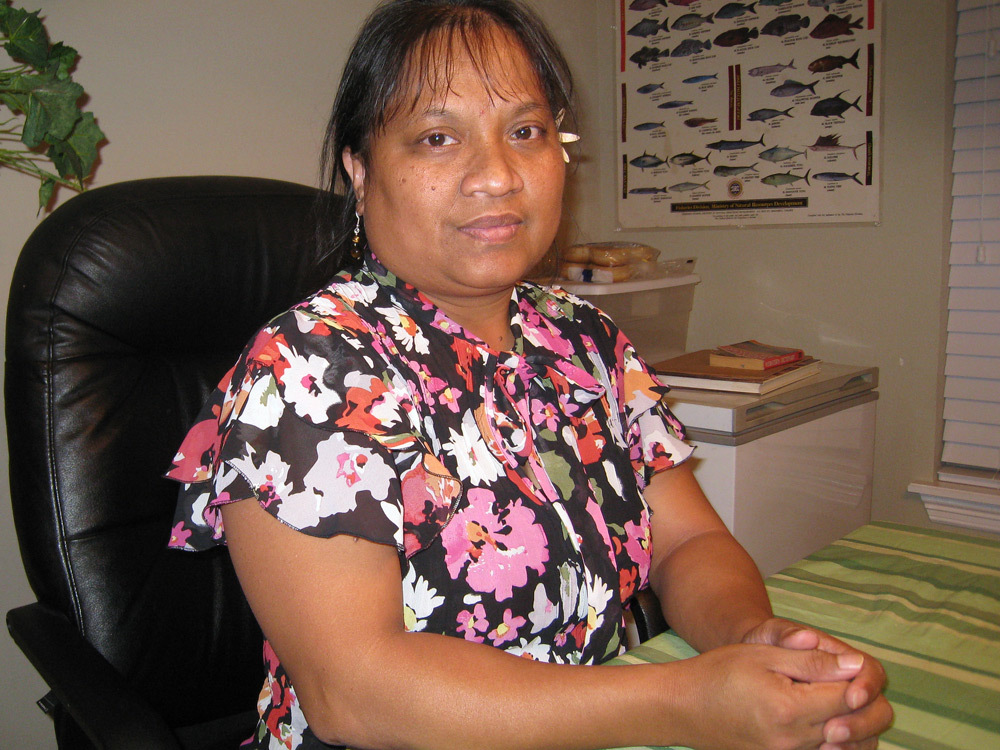 Consul General Carmen Chong Gum sits in the kitchen of her home in Springdale, Ark. Gum says the Marshallese work and pay taxes in the U.S., and therefore should have the same access to government programs as everyone else.

On a recent Wednesday night, about 50 Marshallese gathered at King's Chapel for a rock-and-roll prayer service. Waston Attari, 40, sat in the front row, poring over a Bible. He says sometimes the American dream feels more like a myth. "Living in the U.S. is a challenge for every one of us," he says. He described many in his community who are living paycheck to paycheck.

For Attari, the most difficult part has been getting health care for his diabetes. He's a self-employed tax adviser and doesn't have health insurance. A community clinic has helped him get free insulin, but he explains that he can't go to a doctor "because I don't have the money to pay for the bills." He believes he would qualify for Medicaid services under the legislation and could see a doctor regularly.

Williams explains that 20 migrants might live in a single house, and "you may only have one or two out of 20 working. They're bringing home $300 a week and trying to pay rent and utilities, and buy food and everything else." Health insurance often doesn't seem as pressing as the daily costs of living.

The Community Clinic at St. Francis House sees about 1,000 Marshallese patients each year, more than any other health provider in the region. That's less than 4.5 percent of the clinic's patients, says executive director Kathy Grisham, but it takes a great deal of the clinic's time and resources. Because so many of the patients are uninsured, much of that care is uncompensated.

Mark Krikorian, executive director of the Center for Immigration Studies, a think tank in Washington that favors tighter immigration controls, says it's hard to argue that the Marshallese shouldn't have access to Medicaid. The burden, he says, is falling to federally funded clinics like the St. Francis House and to certain emergency rooms, masking the actual cost of treating the islanders. But he says Medicaid access isn't really the point.

"The bigger issue is should we be letting in people with little education from under-developed countries ... because there's no way to avoid the costs" of their health care, he says. The root of the problem, he explains, lies in using immigration as a bargaining chip with other countries, because "mass immigration is incompatible with a modern society."

But for many here, immigration policy is less important than solving the problem at hand. The Medicaid provision in the House bill "would shift the burden from the Marshallese and their inability to pay for care," said Grisham. "It would give us a payer source for the care we're already providing. ... I'm not holding my breath, but I do hope health reform will bring that to us."