Accessibility links
A Once-Dark Polaroid Factory Goes Green A shut-down Polaroid film factory in Massachusetts has gotten new life manufacturing flexible solar panels. It's just one example of a green industry that advocates say could use government support to spur job growth and help the environment. 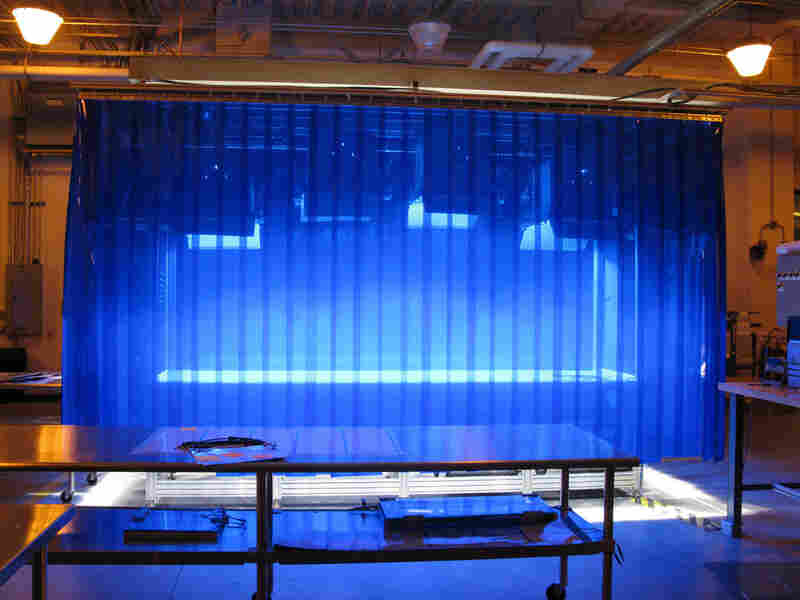 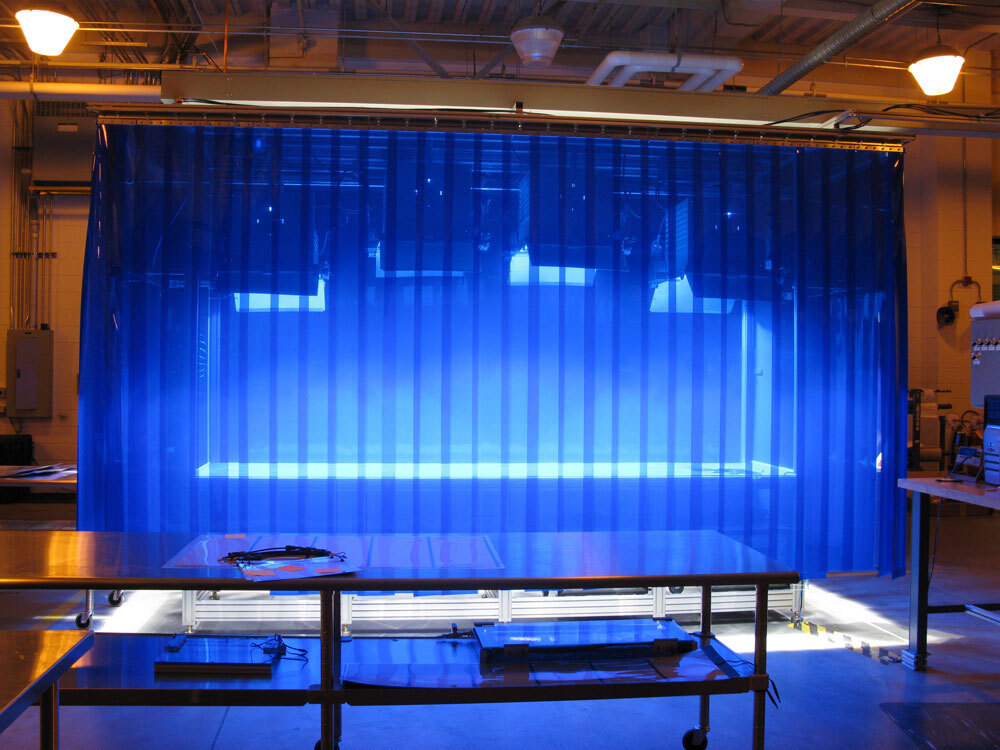 Konarka uses this blue chamber to test solar panels. It re-creates light conditions at noon at the equator.

Many old factories around the country now sit dark and empty. But at a once-defunct Polaroid film factory in New Bedford, Mass., the lights are on again and a new industry is rising up inside the ruins of an old one.

The company Konarka makes solar panels, but not the kind most people have seen. These are thin, lightweight, flexible plastic sheets, and that enables them to be used in all sorts of new ways.

One type of the power plastic is transparent, so it can be built into windows to let homes or office buildings generate their own solar power. The material can also be sewn onto a bag or briefcase — even something that small will generate electricity.

Solar Power: Turns Out That Yes, You Can Take It With You
Sun Inspired: How To Build A Solar Backpack April 19, 2009

Hess says he uses a bag like this every day to charge his cell phone. Just by setting the bag in the sun, or even under regular office lights at work, the plastic solar cell on the bag charges a battery inside it which can then be used to charge an iPod, cell phone, or other small electronic device. He says an umbrella for a cafe table can generate enough electricity to charge eight laptop computers.

The technology behind the power plastic is a photovoltaic material that converts light into direct current.

The equipment at this factory used to make big sheets of Polaroid film. Konarka converted it so that these same machines are now churning out these filmlike solar panels. And the company has hired back about 20 of the former Polaroid workers to run the factory. So it has given new green jobs to workers who had been laid off.

"You know, I invested my whole career at Polaroid and I thought it was over," says Mike Page, an electrician and machine operator. "And now I feel renewed and I feel like I have a whole new future."

Green-job proponents say the government could spur jobs and help the environment at the same time by promoting the growth of clean energy-related industries. Some conservatives scoff at the idea. But other experts think it holds promise.

President Obama has said he wants to create 5 million new green jobs in the next decade. The president and other Democrats want to use government grants and incentives to spur the creation of a range of clean energy-related jobs.

Interactive: The Decade Ahead In Jobs

Could green jobs be the solution?

Some experts are skeptical. Michael Levi, a senior fellow with the Council on Foreign Relations, says even if 5 million jobs are created, "that can only be a very limited piece of the puzzle in a country of several hundred million people."

Levi says proponents often only talk about the jobs that will be created — not the jobs that will be lost. The economy remains a big interconnected system. He cites this example: The country only needs so much electricity and if more of that comes from wind power or solar power, less is going to come from coal. So some coal miners would lose their jobs.

Levi says anytime the government pushes the economy in a given direction, it will gain jobs in some areas and lose them in others. In the grand scheme of things, Levi says, "it's other elements of economic policy that are going to change people's lives." He says these include when the Federal Reserve lowers or raises interest rates since this has a powerful effect on stimulating or slowing down the economy.

There's also the question of what gets counted as a green job. The numbers get mushy. What about electricians who already have a job, but who start installing more efficient furnaces — are those counted as new green jobs? Levi says many green jobs will really just be existing jobs shifted into this category.

Other experts say green jobs are much more important to the economy. Bracken Hendricks, a senior fellow with the liberal think tank the Center for American Progress, says green jobs and clean energy industries are "at the center of the future of American competitiveness."

The global auto industry is a case in point, he says. If companies in the U.S. can come up with the best electric car technologies, "we're talking about who is going to own the growth of the auto industry globally," Hendricks says. And with China projected to increase the number of cars on its roads from 65 million to 300 million, he says that's a very big deal.

People's views on green jobs depend on their vision of the future. Rep. Ed Markey (D-MA) authored clean energy and green jobs legislation that was recently passed by the House. He says clean energy technology will be huge — a game changer and job creator on par with the personal computer and the Internet.

"We have to think of this as the next great job-creating sector," Markey says. The right kind of telecommunications policies in the 1990s helped lead to the explosion of American companies such as Google, eBay, Amazon and YouTube, he says, adding that the country needs to be similarly positioned for the clean energy future.

In the meantime, the Obama administration is interested in some shorter-term job creation. It's looking to give Americans incentives to insulate their homes. The idea is to put thousands of contractors to work with insulation and caulk guns in a program called "cash for caulkers."