Accessibility links
FAA Investigating Airline After 3 Rough Landings During the same month that Flight 331 skidded off a runway in Jamaica, two other American planes experienced problems as they landed. In these instances, a tip of the wing touched the runway. Nobody was injured on either flight, but the agency wants to increase oversight of the airline to figure out if there's a pattern. 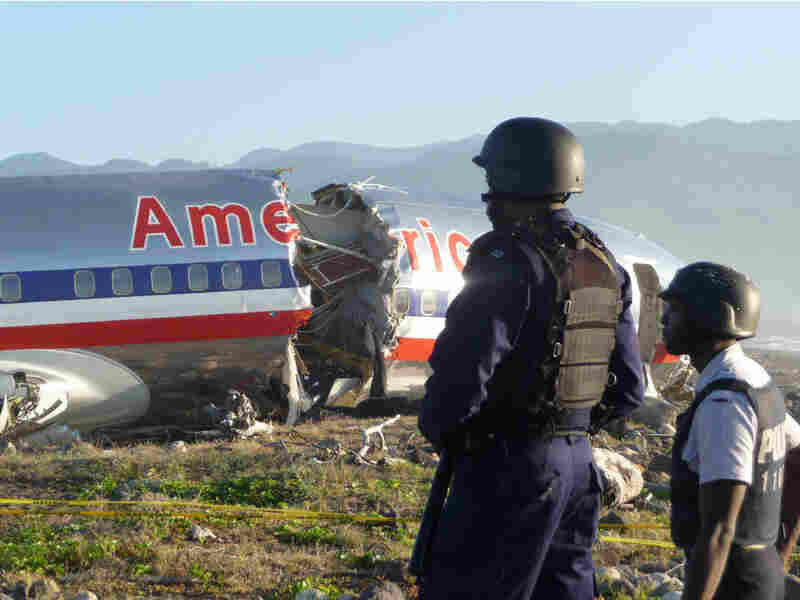 Officials look at the wreckage of American Airlines Flight 331, which skidded off the runway while trying to land in Kingston, Jamaica, on Dec. 22. Kerry Sanders/NBC NewsWire/AP hide caption 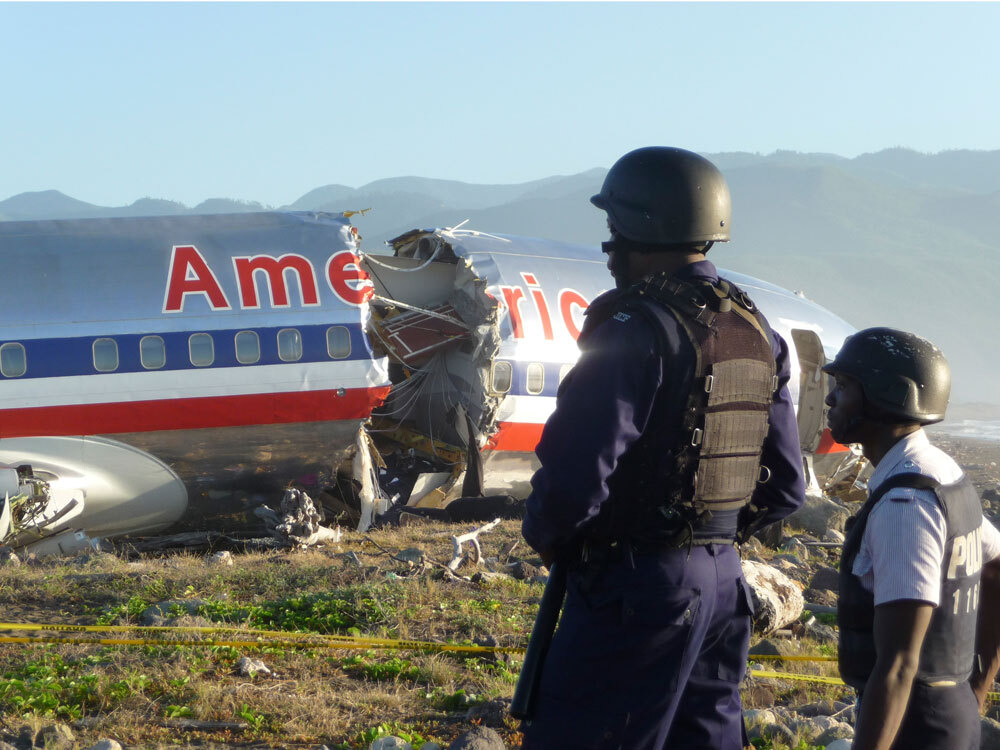 Officials look at the wreckage of American Airlines Flight 331, which skidded off the runway while trying to land in Kingston, Jamaica, on Dec. 22.

Two weeks ago, American Airlines 737 skidded off a runway in Jamaica. The fuselage cracked, and dozens of passengers were injured. But that wasn't the only landing mishap American had last month.

Two other American jets — one in North Carolina on Dec. 13 and one in Texas on Dec. 24 — experienced problems as they landed. And now the Federal Aviation Administration says it's increasing its oversight of the airline to figure out if there's a pattern.

The other rough landings were far less serious than the Jamaican accident. Both of the incidents involved MD-80 series jets, and in both cases, the tip of a wing touched the runway as the aircraft landed. Nobody was injured on either flight, but it's unusual for a major airline to have three bad landings in just a couple weeks.

Aviation safety consultant Todd Curtis, who runs the Web site Airsafe.com, says regulators most likely will look into whether the mishaps are symptoms of some larger problem in American's operation.

"Every airline develops its own procedures both for maintenance and for flying. So one kind of scrutiny could be going through to make sure that those procedures were actually done," he said. "They could [also] have FAA flight examiners basically looking over the shoulders of some pilots to see whether or not they're operating in accordance with FAA regulations."

American says it's cooperating with the FAA. Airline officials declined to be interviewed but issued a written statement saying the company is conducting an internal review of the wingtip incidents and is working with authorities investigating the crash landing in Kingston.

The company says it has discovered no connection among the three events, and Bill Waldock, an aerospace safety professor at Embry-Riddle Aeronautical University, sees no obvious link either.

"Two of the three airplanes were MD-80 aircraft that has a wing that's relatively low to the ground and a different set of landing characteristics than the 737 that actually crashed in Kingston," he said. "Right now we're not sure if they're related."

Waldock says these kinds of FAA actions are uncommon, but not unheard of. In 2008, for instance, the agency ordered a wide review of maintenance records after fuselage cracks were found in several Southwest Airlines jets. Still, Waldock says, he's seen nothing about the investigation that makes him worry about the safety of flying. And other aviation experts doubt the three landing mishaps will affect consumers' faith in air travel, especially now when a seemingly more pressing issue — terrorism — is dominating much of the news.

At Reagan National Airport in Washington on Monday, few passengers expressed concern about safety, taking in stride both the recent headlines about terrorism and problems like landing mishaps. Renee Lyons, who was flying home to South Carolina after visiting her family, says she's aware of the recent turbulence in the airline industry but won't stop flying because of it.

"You can't really live in fear forever. And if you've got to go visit your family, you've got to go," she says. "I mean, you're in danger driving on the road of a car accident. So I just look at it like when it's my time to go, I'll go. I'm not going to stop living my life out of fear for what's going to happen."

Though the number of passengers was already down because of the economy, there's been no sign of a further drop because of safety or security worries.

But Field says people might start to shy away from air travel if the failed Christmas Day bombing leads to an increase in the amount of time it takes to get through security checkpoints. He says people are more deterred by the hassle and inconvenience of security screening than they are by actual concerns about safety.