Accessibility links
Ron Paul's Libertarian Message Attracts Supporters Republican congressman, presidential hopeful and Internet phenomenon Ron Paul has distinguished himself from the pack with his anti-big-government record. And his fundraising efforts are outpacing other, better-known candidates. 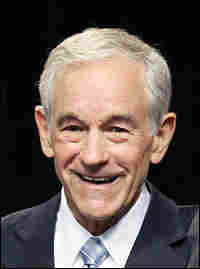 Ron Paul (shown here in May 2007) is a Republican congressman from Texas and presidential contender. He has become an unlikely Internet phenomenon with his libertarian message. Gabriel Bouys/AFP/Getty Images hide caption

Read a profile of Ron Paul and learn more about his background, voting record, ideas.

Abortion and the States

Paul's Popularity on the Internet

Health Care: Not a Right

Read an Earlier Post About Paul on the NPR News Blog

Republican congressman and presidential hopeful Ron Paul has distinguished himself from the pack with his libertarian message, and his campaign's momentum has been accelerating with impressive speed.

Although his overall poll numbers remain in the single digits, Paul has attracted ardent supporters, largely through the Internet. And while the money he has raised does not compete with the campaign funds of candidates like Mitt Romney and Rudolph Giuliani, Paul nonetheless has about the same amount of cash in the bank as one-time Republican front-runner John McCain.

Paul is a doctor — an obstetrician and gynecologist who was an Air Force flight surgeon in the 1960s. He is also a former Libertarian Party candidate for president.

In Congress, he is a steadfast opponent of big government, voting against many tax increases, against the USA Patriot Act, and against two wars with Iraq.

Paul, the only Republican presidential candidate to vote against the current war in Iraq, talks to Robert Siegel about the Middle East, U.S. foreign policy, congressional pensions and other issues he is highlighting on the campaign trail.

If you were president, how fast and how far would you withdraw from Iraq?

As quickly as possible and as far away as possible. I think the military people have to tell you how fast you can do it safely, but it wouldn't be one of these things [where I would] wait six months to start. I would do it immediately; I would certainly move the Navy away from the shores of Iran — and from intimidating Iran and trying to provoke them and [to] spread the war.... Of course, in the overall foreign policy, I'd like to bring the troops home from most other places around the world, too.

Get the troops back on American soil? That's what you propose?

Withdraw the Navy from the Persian Gulf?

Yes, definitely, because that [having U.S. ships there] is very provoking and that sends a signal that we're there for the oil, and a lot of people do admit that. We don't care about some of the problems in Africa like we care about the problems in the Middle East, and oil is one of the big factors.

You would also, if you had your druthers, withdraw from NATO?

Yes, certainly. That is sort of an old right, conservative Republican position, and certainly after the Cold War ended, there was a lot less need for NATO. I think NATO is embarking in the wrong direction right now by moving right up to the borders of Russia and almost trying to renew the Cold War unnecessarily.

Out of the United Nations?

Yes, I certainly think so, because it's part of the draining of our resources. It's not like you have to close it down in one day.... If you could immediately limit it to the participation in war, it wouldn't bother me quite so much. But I don't think our interests are well served by giving some of our sovereignty up.

What you've described as an old, conservative Republican view of foreign affairs is called, in many quarters, isolationism.

Some people who would like to diminish its value call it that. I don't call it that, because to me, it's the opposite. It conforms with what the founders advised, and that is, yes, we don't get involved in the entangling alliances and the internal affairs of other nations, but they strongly advocated trade and talking and travel. And now that we follow that policy with Vietnam ... [the country] has Westernized; we trade with them; their president comes here, we invest in Vietnam. So we achieved in peace what we couldn't achieve with war. But it's a far cry from isolationism.

Do I have it right that in your years in Congress, you have not taken advantage of the congressional pension system?

That is correct. Of course, you only take advantage [of the pension] when you leave. No, I don't participate. My wife sometimes asks me about it — the wisdom of all this.

Why don't you take part in it?

On principle... [i]t's probably not quite as biased an advantage as it used to be. But when I first went into Congress, it was such a biased system, and so I saw this as an abuse of power, and a privilege that members of Congress should not have.

You have not taken congressional trips overseas.

No.... I don't because too many times they're junkets. Sometimes they're done with great sincerity, but since I'm a noninterventionist, I already know what our dealings should be with other countries. I don't need to go and check on how our money's being spent. I don't want to spend the money.

Have you traveled on your own nickel overseas as a congressman?

Not very often. I did... a lot of traveling as a flight surgeon. But since that time, I've only made one major trip, and it was a major economic event: a translation of a major economic textbook... into Czech, and so I went to Prague to help celebrate this translation, and that was done with personal finances, as well as help from the University of Prague.

I want to ask you a couple of quick things. I want to ask you first about your exchange with [New York] Mayor [Rudolph] Giuliani in the recent debate when you said, look at why al-Qaida struck at New York — the U.S. had been bombing Iraq, the U.S. presence in the Middle East was what they were objecting to — and Mayor Giuliani turned on you as if to say, you've just said it was as if the U.S. deserved the attacks of Sept. 11.

It was a political deal for him to try to jump on that, but it was absurd. It's sort of like, we find a murderer and we look for the motive — then you're blaming the victim. No, I'm not blaming the victim, I'm not blaming the American people, but I am blaming American policy for contributing to the problem. I defended that with quotes from the 9/11 Report, quotes from [Paul] Wolfowitz... and then the most preposterous thing he said was that he had never heard of such a thing. Well, where has he been? That's why I presented him a list of books — if you just read this, you would know where these ideas come from, because it's a condition that has been described clearly by the CIA, that there is blowback. These things come back to hit us..... If you look at the Iranian problems today, that started in 1953 when we first threw over a democratically elected leader, and we've been suffering ever since.

Realistically, what chance do you give yourself of winning the Republican nomination?

A lot more than it was six months ago, I tell you that. We're in the top tier now; we're third and fourth in money and money in the bank, and our numbers are growing. But I know what the odds are. But I also know how many young people and others are very receptive to this, and said, you know, it's about time we talked about freedom rather than how the government is going to take care of us from cradle to grave, invade our privacy, fight these war[s], and run the economy.

This transcript has been edited for clarity. 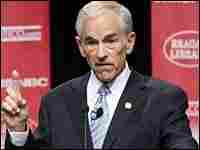 Rep. Ron Paul at the GOP presidential candidates' debate in Simi Valley, Calif., May 3, 2007. After each GOP debate, Paul has led nearly every online poll asking viewers whom they thought was the winner. Gabriel Bouys/AFP/Getty Images hide caption

If you were asked to name which Republican candidates were seeking their party's presidential nomination, you might not think of Ron Paul. In nearly every survey of GOP voters, Paul's name barely registers. But on the Web, Paul is the most talked about, most searched for, most linked to of any of the presidential candidates, Republican or Democratic.

After each GOP debate, Paul has led nearly every online poll asking viewers who they thought was the winner. He has more friends on MySpace than Hillary Clinton and Barack Obama. His YouTube channel has 10 times as many subscribers as Rudolph Giuliani's. More than any of the other candidates, Paul uses the Web to promote grassroots organizing and networking.

But as Howard Dean learned in 2004, Paul's challenge is to move beyond just being an Internet phenomenon.

Paul is an iconoclastic libertarian. He first came to Congress from Texas in a special 1976 election to fill a Democratic vacancy. He was defeated for re-election in November, but won back the seat two years later. His 1984 bid for the Senate ended when he was defeated in the GOP primary by Phil Gramm.

In 1988, Paul left the Republican Party to become the Libertarian nominee for president. He returned to the GOP fold — and to Congress — in 1996, and has served there ever since.

He is also a strong critic of U.S. involvement in the affairs of other countries. Paul drew attention — and a rebuke from Giuliani — when he said in a debate earlier this year that U.S. intervention in the Middle East had been a major contributing factor to the attacks of Sept. 11, 2001.

Like most libertarians, Paul believes in abolishing the federal income tax. He opposes most federal regulations and has called for dramatically reducing the size of the federal government. Some of Paul's Capitol Hill colleagues have nicknamed him "Dr. No," because he never votes for legislation unless it is expressly authorized by the Constitution. As a physician, Paul refused to accept Medicare or Medicaid payments. He has never signed up for a congressional pension.

Ron Paul is 71. After receiving his medical degree from Duke University in 1961, he served as a flight surgeon in the Air Force and National Guard. Paul was a practicing obstetrician-gynecologist in Brazoria County, Texas, before being elected to Congress. He and his wife, Carol, have five children.