Accessibility links
Florida Fights Fruit Freeze As Record Cold Descends A balky cold wave locked frigid temperatures in place throughout the South, endangering strawberries and other crops. In Atlanta, volunteers fanned out to bring the homeless to shelters. Forecasters predicted five days of freezing temperatures for much of the South. 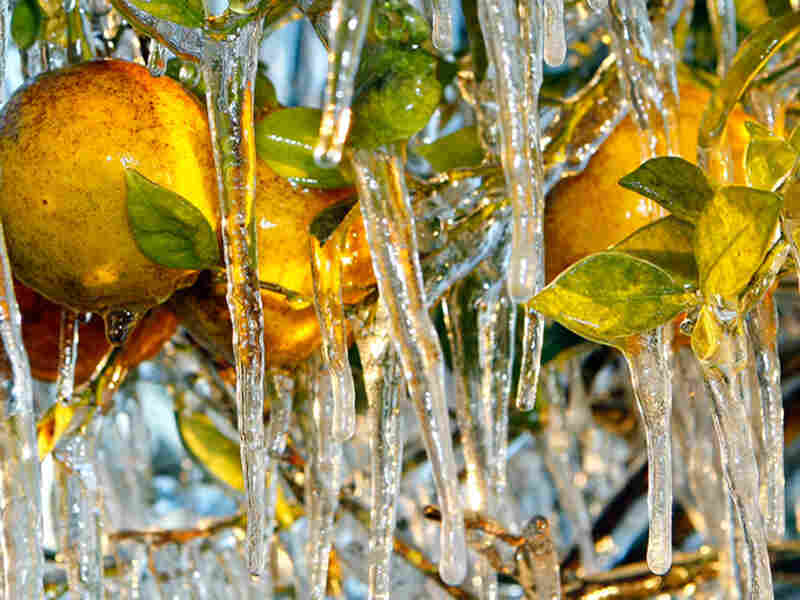 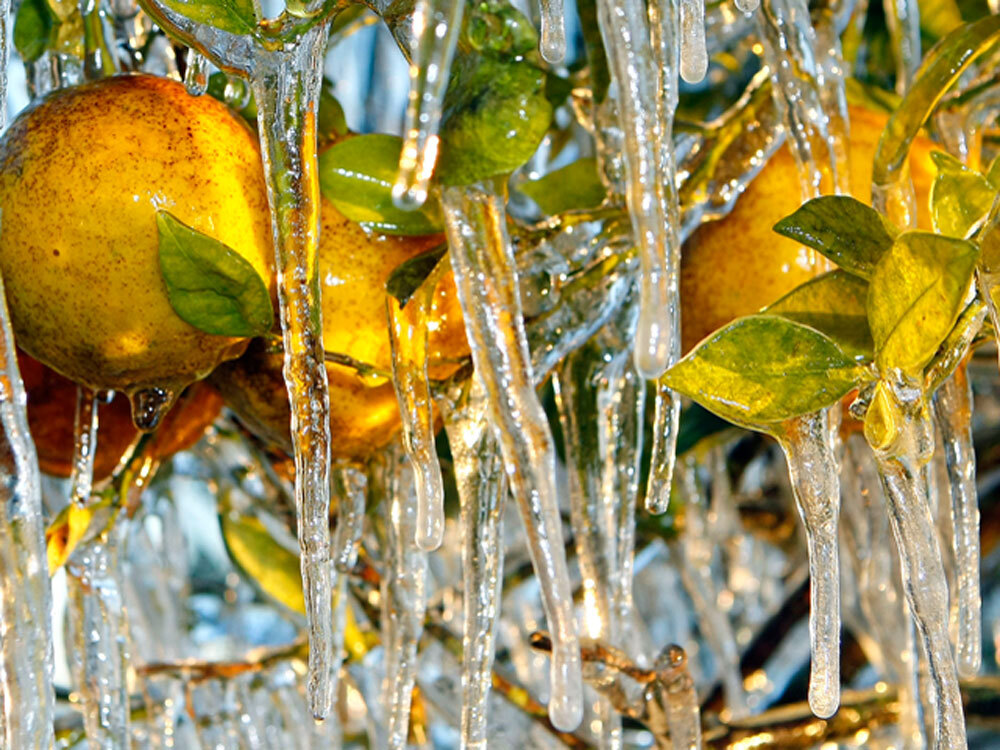 Icicles cling to oranges Wednesday in Lakeland, Fla. Farmers spray their crops to help protect them against the cold temperatures.

Florida farmers scrambled to protect fruit and vegetable crops on Wednesday, as forecasters predicted five days of freezing temperatures for much of the South.

Temperatures in West Palm Beach, Fla., set a new daily record low of 34 degrees Wednesday morning, while Miami tied a record low of 40 degrees that was set in 1919, according to the National Weather Service.

"We're expecting this cold outbreak to continue to at least Monday of next week," said meteorologist Kelly Godsey in Tallahassee, Fla. "We've issued hard freeze warnings all across our area, and hard freeze warnings imply an even greater threat to the agriculture interests in the area [and] also a threat to pipes, livestock, pets that may be left outdoors."

Throughout the state, citrus, strawberry and vegetable farmers spent the day harvesting some crops and spraying others with water so layers of ice would protect plants from the frigid air.

"Watering the plants forms a protective ice coating to insulate the plant to stay at 32 degrees," said Sue Harrell, marketing director for the Florida Strawberry Growers Association. The technique requires constant monitoring in case a pump or sprinkler head should break, she said.

Tuesday night, was the coldest so far, Harrell said. Some growers turned on irrigation systems as early as 7 p.m. when the temperature in some fields already was in the low 20s. The freezing technique protects plants and unripe fruit from damage.

Hillsborough County, Fla., produces 15 percent of the nation's strawberries — and almost all of the berries sold during the winter, the association said.

Ted Campbell, executive director of the association, said there has been a 40 percent decline in this week's harvest rate over the same period last year. However, he said production of the resilient berries would pick up dramatically when the weather warms up.

The extended cold snap has done some damage to Florida's citrus crop, a $9 billion industry.

"It looks like we have some isolated pockets of damage, maybe some frozen fruit, some twig and leaf damage, but overall we came through pretty well," he said.

But he said citrus growers remain on alert as forecasters predict the freezing temperatures to continue.

Florida Gov. Charlie Crist declared a state of emergency after forecasters predicted evening temperatures could drop below freezing through Sunday.

His order enables state agencies to assist growers and relaxes restrictions on transportation of vulnerable crops — including tomatoes, citrus, strawberries and vegetables — to processing sites in hopes of averting a "major disaster."

Authorities were also warning residents to protect pets and livestock. At the zoo in West Palm Beach, workers took exotic birds and monkeys inside and put heat lamps around the park.

The cold weather didn't keep football fans out of the stands, though. Crowds cheered the Iowa Hawkeyes to victory over Georgia Tech at what the Miami Herald called the coldest Orange Bowl ever — 49 degrees at kickoff.

Although freezing temperatures were also forecast for other crop-producing states, predictions weren't as dire. In South Texas, also a major citrus producer, agriculture experts said temperatures were only expected to dip below freezing for a few hours — not long enough to damage fruit and vegetables.

"The crops we have — citrus, sugar cane and vegetables — to sustain serious damage there would have to be temps in the mid-20s" for an extended period, said Rod Santa Ana, spokesman for Texas A&M University's AgriLife Extension Service.

Elsewhere in the U.S., communities braced for the worst. In northeast Ohio, another 5 to 6 inches of snow fell Tuesday in an area already covered by 2 feet of snow, according to the weather service.

In Atlanta, volunteers canvassed underpasses and bridges trying to persuade homeless people to take shelter out of the cold.

Carl Hartrampf, master plan developer for the Metro Atlanta Task Force for the Homeless, said many people refuse help, even in the subfreezing temperatures.

"People that are out here like this tonight — so cold and they refuse to come in — there's something, either depression or maybe even addiction or mental illness, that is preventing them," he said. "That's why it's so important to do this outreach, really all year, and try to get people into some proper facility."

The Metro Atlanta Task Force for the Homeless operates the largest shelter in the Southeast. On most nights, about 500 people stay at the shelter, but that number doubles when the temperatures dip.

Brian Corbett, spokesman for the Alabama Department of Corrections, said temporary heating units were set up and about 650 inmates were moved to other facilities.