Accessibility links
When Play Means Pay: Video Game Jobs On The Rise Employment in the video game industry is rapidly expanding as people turn to mobile devices and social networking sites for entertainment. Colleges around the country are tuned in, offering courses or degrees for many people who grew up playing games on computers and consoles. 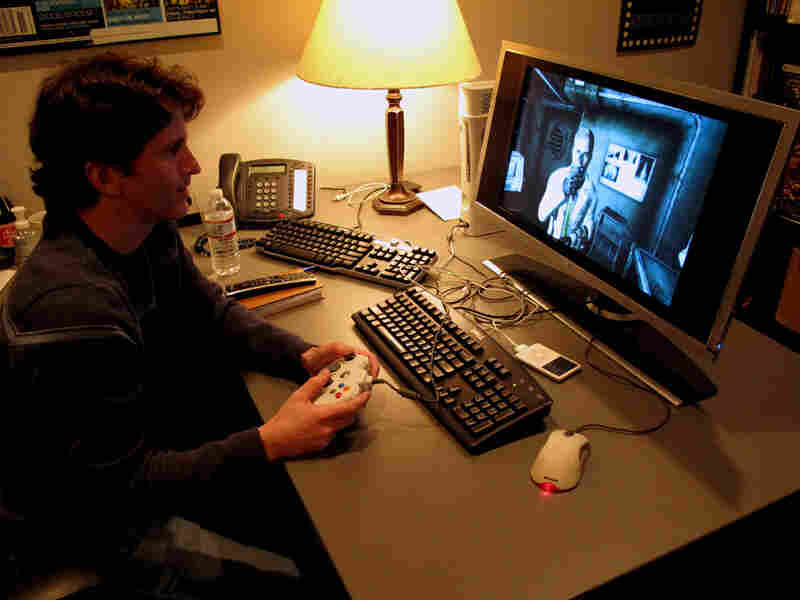 Todd Howard, the game director for Bethesda Softworks, plays Fallout 3 in his office. He says the casual culture is one of the attractions of a career in the video game industry. Joshua Brockman/NPR hide caption 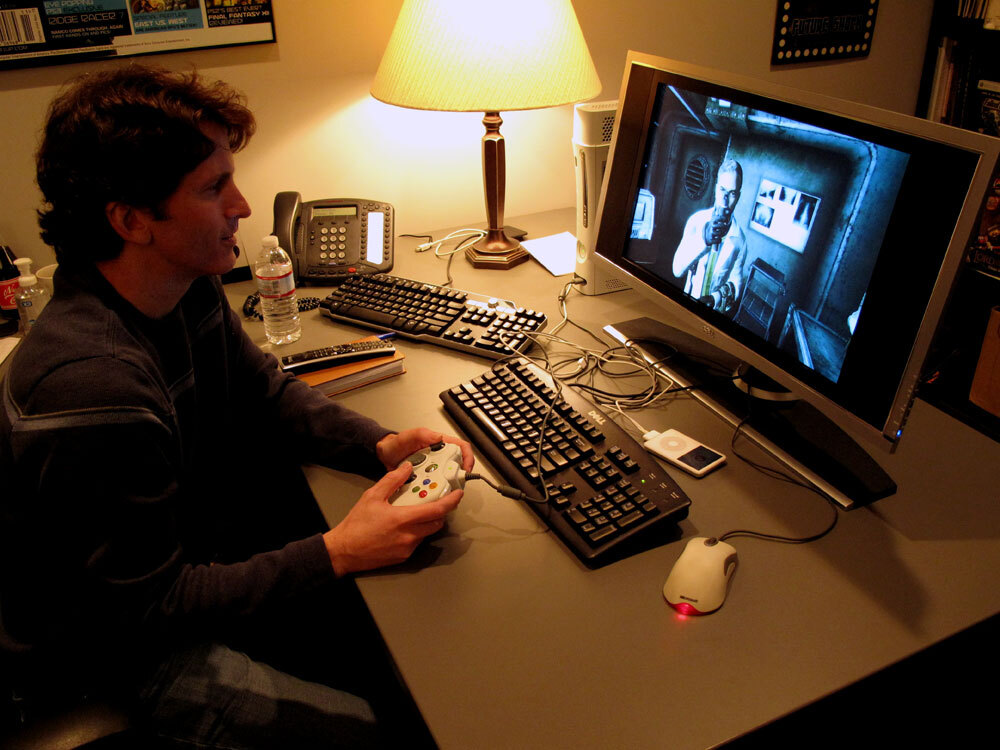 Todd Howard, the game director for Bethesda Softworks, plays Fallout 3 in his office. He says the casual culture is one of the attractions of a career in the video game industry.

Imagine having a boss who encourages you to play games during the workday.

It's a reality for many people in the video game industry, including Todd Howard. At midday on a recent Friday, he was playing Fallout 3 in his office. When Howard, 39, first started at Bethesda Softworks in Rockville, Md., 15 years ago, his parents told him to have a backup plan.

He didn't need one.

Now he's the company's game director. Howard oversaw the creation of Fallout 3, a popular coming-of-age video game. As he demonstrates the game to a visitor on his Xbox 360, his avatar, a 10-year-old boy, is treated to a birthday party.

A woman's voice chimes in and remarks: "He's growing up so fast."

The company — a division of ZeniMax Media — is also having a teenage growth spurt of its own.

"For our company, there are certain areas where we are hiring very aggressively because we are growing rapidly," Howard says.

The recession forced some game studios to close or make sizable layoffs. But ZeniMax nearly doubled in size during the past year, growing from about 250 employees to more than 400, in part owing to its acquisition of another video game company.

Finding a job in the video game industry is a dream come true for many people who grew up playing games on computers and consoles. And the field is swiftly expanding as people turn to mobile devices like the iPhone and social networking sites like Facebook for entertainment.

Analysts and developers point to a common thread: The entire video game universe is maturing.

"I'd say game industries are sort of coming out of their adolescence," says Drew Davidson, the director of the entertainment technology center at Carnegie Mellon University. "They're in their late teens and so there's still a lot of growing to do."

Game Developer Research says there are about 45,000 total employees in the U.S. video game industry, with an average salary of close to $80,000. Salaries can reach into the six figures, and programmers are among the highest-paid. The Bureau of Labor Statistics projects that employment for computer software engineers, some of whom develop video games, will grow by nearly a third in the next decade.

Davidson says colleges around the country are tuned in. "We're seeing a huge upswing in terms of universities trying to offer degrees that focus around games or interactive media ... just because they're so popular."

More than 200 institutions from MIT to DigiPen Institute of Technology are offering courses or degrees in video games, according to the Entertainment Software Association, a trade group for the video game industry.

"The U.S. is the No. 1 video game market in the world," says Michael Gallagher, the chief executive officer for the ESA. "So, here at home we have a very strong market for employment in video games."

The job market is growing because of mainstream demand. Just look around — you can see people of all ages playing games on mobile phones. Social networking games are also wildly popular on Facebook. Some of the companies focused on this niche include Playdom, Playfish and Zynga, which created the popular game FarmVille.

Broadband access and new digital distribution channels for games have also made it possible for small teams to develop games by working out of a coffee shop or someone's garage, Davidson says.

Howard, of Bethesda Softworks, says people also want jobs in the video game industry because a day at the office is casual — not corporate.

"Sometimes I equate it to an organized fraternity," Howard says. "We play games at lunch, we have a giant movie theater in the building, we have a pool table, [and] we have multiple video game setups."

They also have their own chef. So, employees effectively live at the office. It's an industry that values creative collaborations among artists, designers and programmers. The majority of jobs are full time with benefits, and it's a fluid career with people moving across the country, or the world, to take on new projects. But recruiter Mary-Margaret Walker says these patterns may change.

That means video game development teams may no longer work and play in the same physical space.

At the Bethesda Softworks headquarters, Howard works near his team of nearly 100 developers.

With an Xbox 360 controller in his hands, he says, "The greatest feeling in the world is making a game and then going to the store and seeing somebody buy it. It's very special."

The journey from start to finish for a big console game can easily take about three years and cost more than $100 million. These high stakes — and new gaming platforms — are among the reasons smaller, independent companies are taking root to produce games for the future.