Accessibility links
Experts Urge Officials To End Mountaintop Mining A group of hydrologists, ecologists and engineers analyzed years of research and found that mountaintop removal as a way to mine coal is more damaging to the environment and public health than the law should permit. They're urging federal and state authorities to halt or alter the practice.

A team of scientists says the environmental damage from mountaintop removal mining in Appalachia is so widespread, the mining technique should be stopped.

The scientific review of research on the effects of the practice, which dumps coarse rock down the mountainsides into nearby valleys, states that harmful chemicals such as sulfate and selenium are pervasive in streams below.

In the summer of 2007, photographer Daniel Shea set out to cover the coal industry of Appalachia. These are his photos, from NPR's Picture Show blog.

Mountaintop removal is a pretty efficient and cheap way to mine coal. But when the rock or "overburden" above coal seams is blasted away and pushed over the side of the mountain, says Margaret Palmer of the University of Maryland Center for Environmental Science, "you expose material that, when it rains and water percolates through that, it dissolves a lot of chemicals, and those are very persistent in the streams below valley fill sites."

Cleanup Laws May Not Be Working

Federal and state laws require mining companies to clean up and restore mined areas. But Palmer and 11 other scientists who published their review in the journal Science say that's not working. "Even after a site has been reclaimed and attempts have been made to re-vegetate it," says Palmer, a biologist, "the streams that remain below that, that weren't filled, have high levels of all sorts of nasty things." 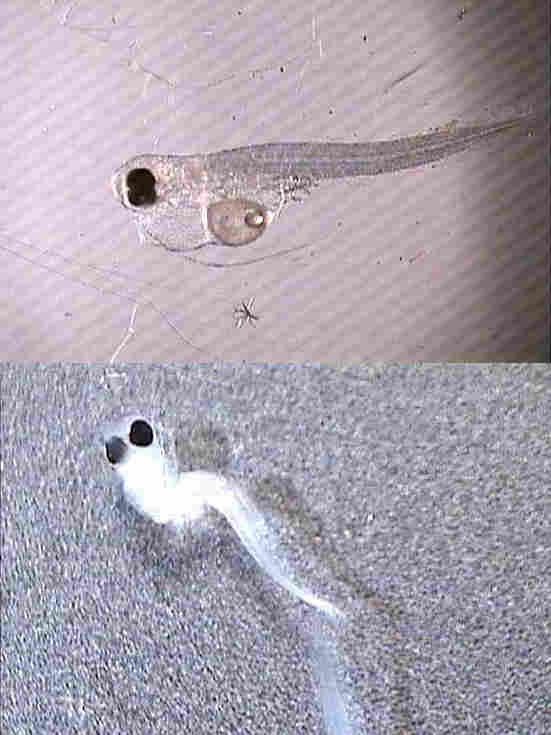 Deformed fish larvae from mountaintop mining-impacted streams in Lincoln County, W.Va. The fish on top has two eyes on one side of its head. The lower fish has a deformed spine. Courtesy A.D. Lemley hide caption 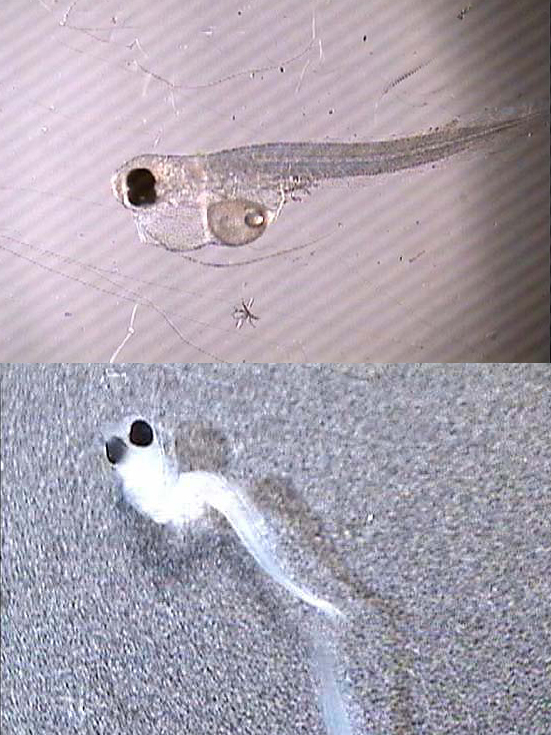 Deformed fish larvae from mountaintop mining-impacted streams in Lincoln County, W.Va. The fish on top has two eyes on one side of its head. The lower fish has a deformed spine.

Things, she says, like selenium, which in high amounts can harm fish and other aquatic life; and sulfates, which alter the water chemistry. Palmer and her colleagues say many animals in these valley streams — from algae to fish and birds — could be seriously harmed.

So, they say, mountaintop mining should be stopped.

In fact, the EPA has been holding up almost 80 permits for new mines to give them extra environmental scrutiny. And at a Senate hearing last year, EPA water expert John Randy Pomponio said the agency doesn't really know how bad the stream damage is.

"These little streams are like capillaries in your blood system," Pomponio said. "They're what travel through the landscape and capture the pollutants, clean those pollutants. And we frankly don't know where the tipping point is in losing one stream, five streams, or 18 streams in a particular watershed."

Pomponio told the Senate that mines in some valleys are so large now, their footprint covers as much as one-third of the watershed (a watershed is the whole area from which water flows into a valley). He also said the EPA has not done a good job of assessing the cumulative effect of all this mining.

While the EPA reviews the science, the mining industry in West Virginia is growing unhappy with the go-slow approach. Randy Huffman is secretary of the state's Department of Environmental Protection. Of the EPA, he says, "They just shut everything down, basically, and it kind of turned industry on its head." 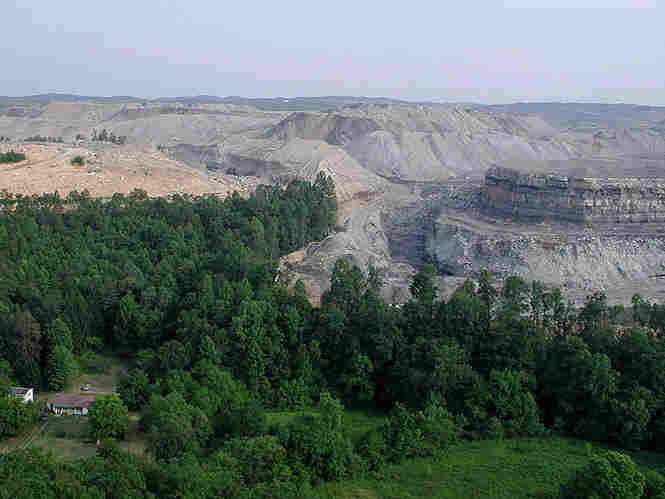 Mountaintop removal coal mining approaches a home on the Mud River in Lincoln County, W.Va. The mine site is part of the Hobet 21 mine. Courtesy of Vivian Stockman hide caption

An Unfair Look At Pollutants?

Huffman says new requests for mining permits in West Virginia are getting closer inspection from his department, and some should go ahead while regulators are looking for solutions.

As for the pollutants the scientists listed, he says they've created a worst-case scenario.

"If you wanted to look at 30 years of coal mining in Appalachia and pick out the worst of everything that's ever happened and put it on two pages you can do that," says Huffman, "and it looks like that's what's been done."

Environmental and citizens groups in Appalachia have been suing for years to stop mountaintop mining, with mixed success. But Huffman says even if mountaintop mining were outlawed, that wouldn't keep other sources of mine waste out of valleys and streams. "We have valley fills associated with every type of mining, including underground mining," he says.

But according to the scientists who have studied the region's streams, mountaintop mining is responsible for the most of the damage.