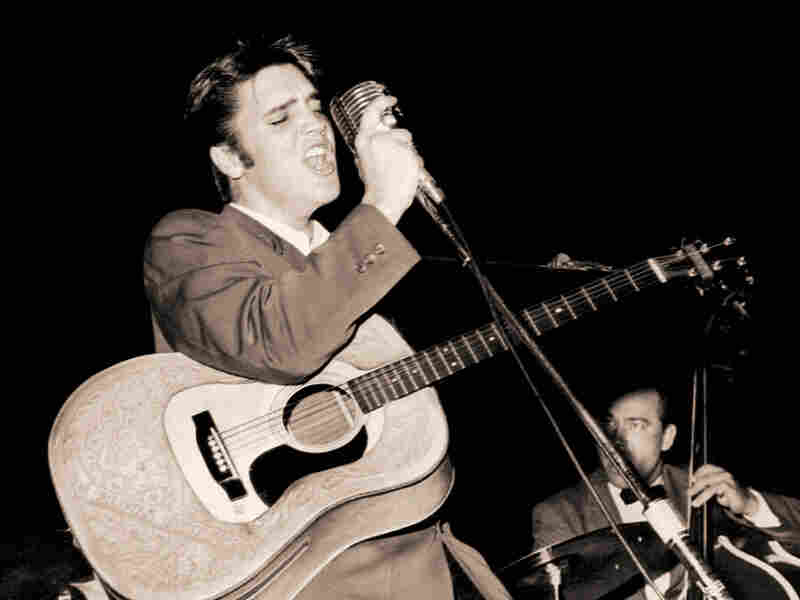 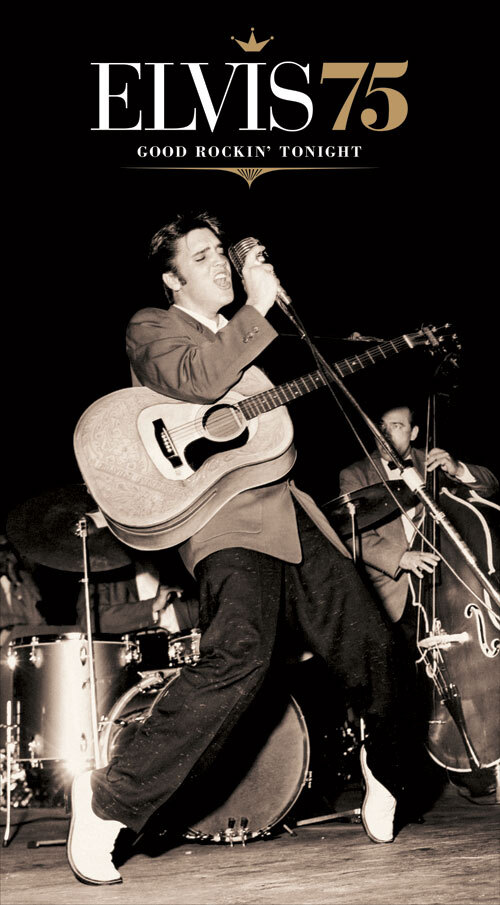 On Friday, Jan. 8, Elvis Presley would have celebrated his 75th birthday. Can you imagine what a 75-year-old Elvis would be like today? Would he perform duets with Bono in an attempt to save the world through song? Record with Auto-Tune? Could you follow him on Twitter? Or would rock 'n' roll still have a beacon of sexy, cool swagger and expert showmanship to remind us how it's done?

We'll never know 21st-century Elvis, but his music remains alive and well. Last month, Sony Legacy released a retrospective box set called Elvis 75: Good Rockin' Tonight, as well as Elvis 75, a single disc featuring his greatest hits. In honor of The King's birthday, stream Elvis 75, in its entirety, and read NPR's staff picks of favorite Elvis songs. The fact that almost half of the reviews come from contributors born after Presley died in 1977 is a testament to his remarkable and enduring legacy. 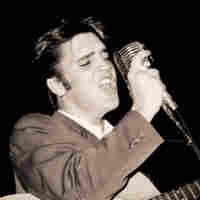 I never got the Elvis thing when I was a teenager. In the early '70s, he was already "Show Biz Elvis." "Las Vegas Elvis." Someone to be avoided by a teenager who was buying The Allman Brothers, Jeff Beck and Santana. Then, one day, I saw the 1968 Comeback Special, a.k.a. "The Sit Down Show," on a television repeat. And there he was in that leather outfit, looking lean and mean. He was prowling the stage with a dangerous swagger that I'd only seen in Keith Richards. Then I realized where Richards got it from -- and where they all got it from. I was spellbound; that night, I got it. The sex, the swagger, the grooves, the leather. The rock 'n' roll. This 1954 recording of Arthur Crudups' "That's All Right Mama" is a 1:57 reminder of that Elvis -- the early Elvis. The mix of white and black music that he oozed: the steady groove of the blues, Scotty Moore's finger-picking country swing, Bill Black's percussive slap bass. It's too bad Elvis died before he could make a Rick Rubin-produced, stripped-down, return-to-his-roots album. I bet he would have nailed it, while offering one of those early sneers, as if to remind us, "Son, I was born to do this."

I met Elvis for the first time when he appeared on The Ed Sullivan Show in 1956. When he sang "Don't Be Cruel," I didn't know if it was
rock 'n' roll, rhythm-and-blues or what. I was 10 years old, and all I knew was that I felt its amazing beat. I was alone in front of the TV and I started dancing. After that, I became a dedicated Elvis fan, but "Don't Be Cruel" remained my favorite song. Many years later, I was covering the war in Bosnia. After spending a horrific day in the middle of the Serbs' "ethnic cleansing" campaign against Bosnian Muslims, I found shelter at a U.N. outpost in a small village in Croatia. There was no electricity, but a transistor radio was on. It was Aug. 16, the 15th anniversary of Elvis' death, and I sat by candlelight listening to the soothing, familiar beat of my favorite Elvis song.

I love love stories. Not the fairytale Cinderella kind -- though I read that story enough times as a kid -- but the Doris Day and Rock Hudson Pillow Talk kind. I watched a lot of old movies when I was growing up, and that's how I stumbled onto Elvis Presley. He was always romancing some young pretty thing by singing her a song and looking deeply into her eyes, that one corner of his mouth turned up. I wasn't able to explore many of his songs, though, because the records my parents owned mostly had Motown labels on them. Still, through his movies, I developed a fondness for the rock 'n' roll crooner and his hip-leg-knee gyration thing. When he died, I was at home playing with my cousin, and I remember my mother saying something about Elvis and then turning on the TV. She, my cousin, my aunt and I stared at the screen, and my mom started singing snatches of Elvis' songs she knew off the top of her head. I only knew a little of one song -- "All Shook Up" -- so I sang that. "I'm in love. I'm all shook up! Mmm… Ooh... Yayyyy-ayyyy."

Elvis' iconic love song "Can't Help Falling in Love" is so simple in its music, and so utterly sincere in its lyrics, that the song risks being flat-out cheesy. But somehow, it isn't, thanks to Elvis' unforgettable delivery. As with the majority of his songs, Elvis didn't write "Can't Help Falling in Love," but he could have fooled me by the way he sings it. Every word resonates in his steady, well-articulated phrases, and his signature vibrato quivers with just the right intensity. He sings with vulnerability that perfectly complements the lyrics. Elvis' version of this song is my absolute favorite, but it isn't the first one I heard -- it was UB40's chart-topping 1993 remake. Though UB40's reggae take on the classic is fun and unusual, The King quickly knocked it out of my favor. In recent years, I've included "Can’t Help Falling in Love" on a few mix CDs, but not without hesitation. Why? Well, at risk of sounding overly sentimental, Elvis can pull it off, but sadly, I cannot. I guess that's what makes him The King.

If you're ever abroad and tell someone you're from Tennessee, they'll pause. They'll then respond with one of three names: Jack Daniel, Johnny Cash and Elvis Presley. Yes, I love whiskey, but no, I've never been to Graceland. And, sadly, as a kid, my Elvis associations were more closely aligned with gas-station impersonators and glittery suits than a man who revolutionized music. Through the years, though, I've come to not only appreciate Elvis, but also like him. But I'm almost embarrassed to say that one of my favorite Elvis songs is not an early, revolutionary rock jam, but a remake of the Civil War song "Aura Lee." "Love Me Tender" (please stop squirming) is nice because it's just Elvis and his guitar, and you. His voice is surprisingly mellifluous, you realize, and he also makes you want to take a nap. And let's get real: What's better than a nap?

Elvis the "Icon" carries a lot of baggage. Whether as the heartthrob movie star or the Vegas showman, or even as depicted by those cheesy and innumerable impersonations, it can be difficult for people to separate the legend from the art. For me, Elvis' actual musical contributions have become somewhat underrated -- if that's even possible -- because his songs and intangible persona command such pop-cultural ubiquity. One of my favorites, "Suspicion," is one of those perfectly constructed pop songs that showcase the brilliance of Presley's music. "Suspicion" initially appeared as a deep cut on 1962's Pot Luck With Elvis. And while it was never a true hit for Presley, it was later reissued as a B-side to the single "Kiss Me Quick" after Terry Stafford's more frequently heard version started climbing the charts. Set against a chirpy bossa nova, this uncertain, paranoid and tormented side of Elvis is rarely seen, but it's also what makes the song so memorable -- and The King all the more human.

"Suspicious Minds," released in 1969, was Elvis' last No. 1 hit in the U.S. before his death. I've loved this song from the moment I heard it, even though it's pretty messed up. Elvis, trapped in a dysfunctional and distrustful relationship, doesn't want out because he loves you too much (baby). The song has an awkward, jarring 15-second fade-out/fade-back-in at the end that reinforces the unhealthy behavior he describes. Even though the subject matter is disturbing, you can't help but want to dance to this track. It's like a great R&B song -- it makes your heart break and your ass shake at the same time.

I was never an Elvis fan; I was a British Invasion baby. And though most of those musicians were inspired by Elvis, the connection was lost on me. In the '70s, I worked in record stores, and there was a lot of down time -- time to slit open records and listen. I worked with an Elvis fanatic named Larry, who was a real "Teddy Bear." His favorite thing to do was turn me on to Elvis. Here's how he did it: He'd pop open an album, we'd be standing behind the counter, and as the music played, he sang them to me, up close and very personal. He was pretty good, but his love for this stuff was over the top. If he weren't such a great guy, it would have been creepy. In 1975, Elvis put out "Promised Land," and Larry flipped. The record was done in Memphis at the Stax studios there. The old Chuck Berry cover hearkened back to the Elvis that inspired my heroes. The record played, Larry sang, and I loved it.