Accessibility links
Diversity Efforts Uneven In U.S. Companies While there have been dramatic gains in hiring practices in recent years, when it comes to promoting minorities in particular, many companies still have a long way to go. 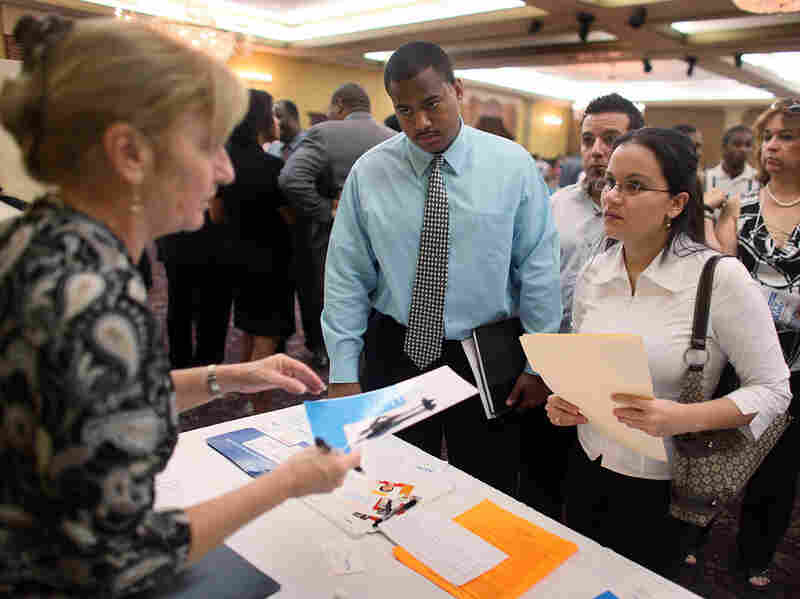 Larraine Weingast (left), a representative from Aflac, talks to Lionel Longsworth and Linette Rodriguez. The two stopped by her booth looking for a job during a diversity job fair in September. Joe Raedle/Getty Images hide caption 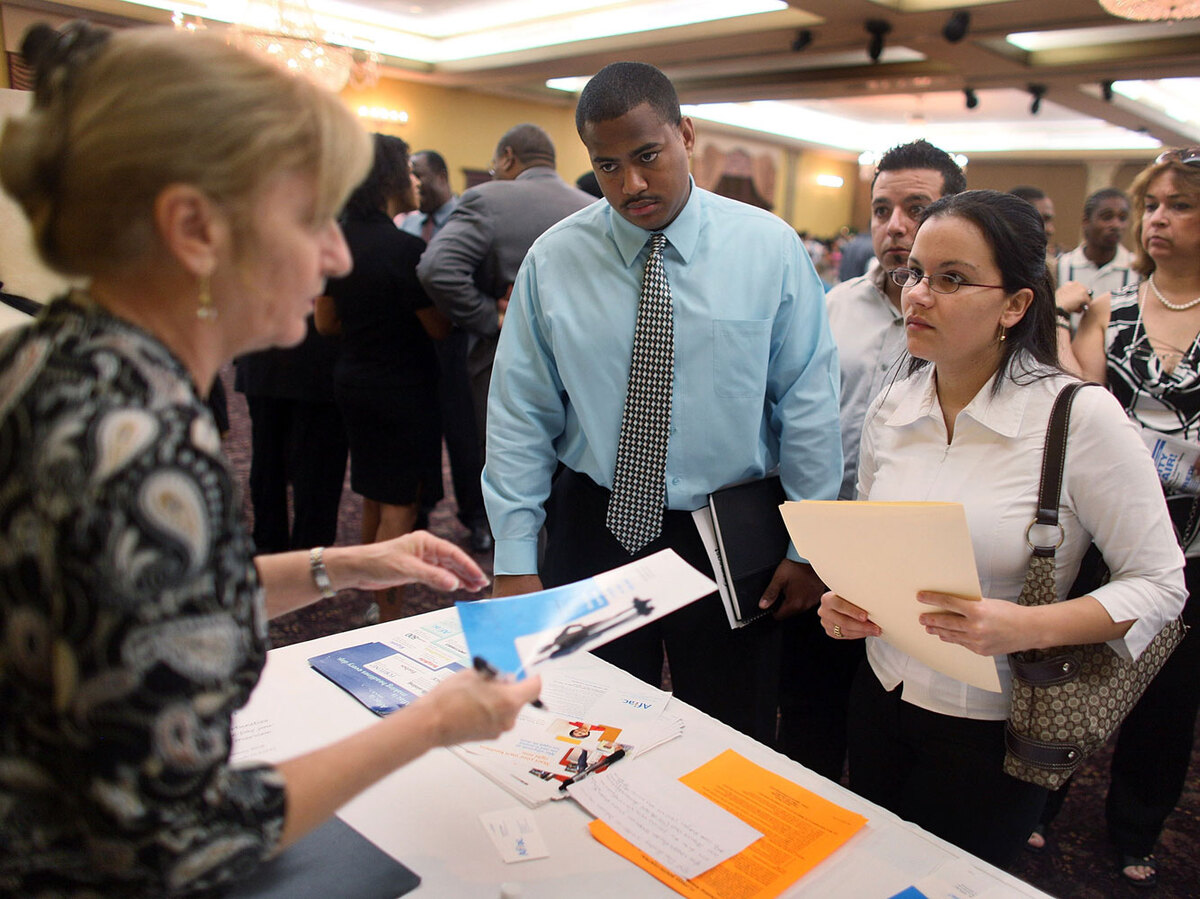 Larraine Weingast (left), a representative from Aflac, talks to Lionel Longsworth and Linette Rodriguez. The two stopped by her booth looking for a job during a diversity job fair in September.

The United States is becoming an increasingly diverse nation, but progress in the workplace has been a bit slower.

On one side, there are companies like Xerox, which have gone well beyond making a concerted effort to hire minorities and women.

"It's not something we manage as a program or as a focused initiative," says Phil Harlow, who has served as Xerox's chief diversity officer since 2003. "We believe the principles of diversity and inclusion need to be well-embedded in all of our business processes."

Not only do Xerox employees regularly fill out surveys to measure how satisfied and engaged women and different minority groups are inside the company, but performance reviews for senior managers include a section on how much they are doing to promote diversity.

But for every Xerox, there are many other companies that do little more than pay lip service to the issue of diversity, says Robin Ely, a professor of organizational behavior at Harvard Business School.

Moving Beyond The Mandates

Ely spent three years working with one company where senior managers were divided over whether or not to promote the creation of so-called affinity groups for different minority groups to meet, hold events and discuss potential problems.

It's a practice that has worked well for some employers, but some of the executives at this particular company worried that they wouldn't be able to meet their employees' demands.

"Nothing really ever came of this because at the executive level, they could never come to grips with what they wanted to do about it and how much of a problem it was," Ely says. "Just doing a little bit is a problem because it raises expectations. People want to see change, it doesn't happen, they get closed down again, and it's kind of demoralizing."

Still, experts say that most companies, particularly the Fortune 500 firms, are trying to move beyond the legally mandated minimum when it comes to affirmative action and anti-discrimination efforts.

"The vast majority of them have gotten on the diversity train and aren't going to get off it anytime soon," says Eric Peterson, the diversity manager at the Society for Human Resource Management. "They realize it's necessary for their long-term prosperity."

But Peterson adds an important qualification: "They don't all do it well, necessarily,"

Indeed, the U.S. Equal Employment Opportunity Commission reported a record number of discrimination charge filings in fiscal 2008 — some 95,402 nationwide, which marked a 15 percent increase over the previous year.

There have been dramatic gains in recent years in hiring practices, but when it comes to promoting minorities in particular, most companies still have a long way to go.

The latest available EEOC statistics show that in 2007, minorities made up 33.4 percent of office and clerical workers — remarkably close to the overall proportion of minorities in the workforce, which is 34.1 percent. But at the executive and senior manager level, minorities represent just 16.6 percent of the total.

"It's one thing to create diversity, but you need to put as much energy into managing the uniqueness of a diverse environment as you do in creating it in the first place," says Xerox's Harlow. "What doesn't work is trying to convince a workforce or the market in general that you have a commitment that gets measured by posters and glitzy Web sites."

The uneven progress among U.S. companies in general reflects the fact that much of the push for diversity was defensive, driven at first by legal requirements about hiring minorities and women. Peterson says that in the 1980s, companies started thinking about it as a values issue, where good employees wanted to work for companies that they were proud of.

"Recently, we discovered that people who took diversity really seriously were succeeding at a rate their competitors weren't," Peterson says. "There is a really strong business case for diversity, as well."

A Change In Culture

For some companies that have ambitious diversity programs, it's about reaching certain customers or working in a global economy. Others believe that diverse teams produce the most innovations. Some companies promote diversity in part to help retain the most talented employees.

"It is true that diversity can have positive effects, but only if we manage it in a creative way to draw out the different experiences people bring to bear from their backgrounds," says Thomas Kochan, the co-director of the Institute for Work and Employment Research at the Massachusetts Institute of Technology's Sloan School of Management. "It's not an automatic kind of thing."

It's one thing to create diversity, but you need to put as much energy into managing the uniqueness of a diverse environment as you do in creating it in the first place.

Managers have learned that it's not enough to bring a wide variety of people into a homogenous corporate culture. Instead, the culture itself often has to change.

"In the early phases of diversity management, there was a rush to establish diversity, but not to manage the whole notion of assimilation," says Robert Lattimer, a senior fellow at the John J. Heldrich Center for Workforce Development at Rutgers University. "We had difficulty in convincing senior executive management and others that the way to get the best results from diversity management was not to force women to act more like men in the organization, or force men of color to act more like white men."

But there has been little systematic research into diversity practices in corporate America. Companies tend to closely guard data about minorities and women because of the sensitivity of the issue. Academics say that companies rarely grant them access to the inner workings of their diversity efforts.

In fact, Ely argues that many firms have yet to fully accept that there is a real business case for diversity.

"People might have a better rhetoric around diversity than they used to," she says. "They are trying to indicate a movement away from the past, but I don't particularly see diversity being incorporated in the way work is being structured."

Part of the problem is that the entire topic of diversity, particularly when it comes to race, remains extremely difficult for many people to discuss openly.

"It's something that's still taboo to talk about," Ely says. "People are afraid to talk about it. They don't want to offend others."

There is also a concern that America's financial woes could force cash-strapped companies to cut their budgets for diversity programs and training. Firms just starting to invest in diversity often rely on outside trainers to conduct workshops for employees or hold special events to mark a particular group's heritage.

"A lot of organizations were far enough along when the recession hit that diversity was so embedded in their organizational DNA, and there was no way to remove it," Peterson says. "For those who were still doing diversity by event, many of those events were canceled."

A Journey Without An End

Many U.S. companies are too small to support formal diversity programs or devote significant resources to training.

"We're talking about a small slice of American employers when we're talking about these issues," notes Carl Van Horn, at Rutgers' Heldrich Center. "Most companies don't even have an HR [human resources] department, let alone a person in the company who's focused on diversity issues."

Among the larger companies, Xerox has had a diversity program for more than 40 years.

Company officials say there are no hiring quotas or specific targets, but managers are expected to show progress toward diversity over time.

"We're not interested in hiring unqualified people," says Xerox's Harlow. "We're talking about drawing from a pool of people that meet the requirements we have established that ensure our ongoing success as a company."

In addition, Xerox runs training programs to introduce new employees to its diversity programs along with a number of other endeavors.

As far back as the late 1960s, a number of black employees formed a group to help each other navigate the corporate culture.

Today, there are six officially recognized "employee caucus" groups at Xerox, including ones for black employees, women, Hispanics, Asians, and gay and lesbian workers. They function as independent, nonprofit groups that perform charity work, but they are also in regular communication with senior executives to discuss all kinds of potential workplace issues.

Separately, some employees have created other social networking groups for young professionals or female engineers.

The ultimate goal, says Harlow, is that diversity is integrated into the daily functioning of each department and employee at Xerox.

"By no means do we think we're perfect," he says. "We just happen to have been at it a lot longer than others, so we're a lot further along in the journey. It's really a journey without an end."