Accessibility links
Bulgarian Nurse Recounts Torture in Libyan Prison One of the medical workers released in Bulgaria on Tuesday after eight years in a Libyan prison said she had tried to kill herself after being tortured with electrical shocks. She spoke at a news conference in the Sofia, Bulgaria. Other members of the group were too ill to attend.

Some of the medical workers released in Bulgaria on Tuesday after eight years in a Libyan prison have been talking about their experience.

Speaking at a news conference in the Bulgarian capital, Sofia, one of the nurses said she had tried to kill herself after being tortured with electrical shocks.

Three of the group were reportedly too ill to meet with the media.

The five nurses and one doctor had been sentenced to death in Libya, accused of infecting more than 400 children with the HIV virus. 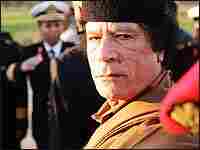 At a time when the United States is wrestling with an insurgency in Iraq and tensions with Iran, America's relations with Libya stand out as a diplomatic success story.

Libya, a nation once accused of sponsoring international terrorism and maintaining a secret weapons program, has rejoined the international fold. It now enjoys full — if not quite chummy — relations with the United States.

"If diplomats wrote fairy tales, this would probably be one," says BBC diplomatic correspondent Jonathan Marcus.

A History of Troubled Relations

The turnaround, though, came after two decades of tense, often hostile relations between the United States and Libya.

Relations cooled even further in 1986. President Ronald Reagan, alleging that Libya was behind the killing of two U.S. soldiers at a Berlin disco, ordered a halt to all economic ties with Libya and froze Libyan assets in the United States. Ten days later, U.S. jets bombed Libya's capital, Tripoli, as well as military bases. More than 40 people were killed, including Gadhafi's daughter.

In December 1988, Pan Am Flight 103 exploded over Lockerbie, Scotland, killing 270 people. The United States and Britain blamed Libya for the attack; three years later, a U.S. court formally arraigned two Libyan intelligence agents in connection with the bombing. Libya, though, refused to hand over the men. The United Nations then imposed sanctions, isolating Libya and crippling its economy.

In 1999, Gadhafi reversed course. He handed over the two Lockerbie suspects. They were tried in the Netherlands, under Scottish law. One of the men was found guilty of murder and sentenced to life in prison.

That was only the beginning of Libya's efforts to mend relations with the international community. In 2003, Libya accepted legal responsibility for the Pan Am 103 bombing, agreeing to pay compensation to the victims' families.

That same year, Gadhafi announced that Libya was relinquishing its weapons of mass destruction and long-range missiles. At the time, a foreign ministry spokesman in Tripoli said the arms race contradicts Libya's "great concern for a world that enjoys peace and security".

In response, President Bush lifted the U.S. trade embargo and, last year, restored full diplomatic ties. The State Department removed Libya from its list of nations that sponsor terrorism. U.S. tourists are now free to travel to Libya, and U.S. oil firms can once again do business in this energy-rich nation. For the first time in two decades, Libya is no longer an international pariah.

A Model for Rapprochement?

The Bush administration portrayed the Libyan "fairy tale" as an example of how diplomacy, backed up by the threat of force, can succeed. The White House even suggested the same approach might yield results with nations such as Iran, Syria and North Korea. Indeed, North Korea recently shut down its Yongbyon nuclear reactor — though it was not necessarily the U.S. "stick" that achieved that objective, but rather, the "carrot:" 50,000 tons of fuel oil and the release of some frozen North Korean assets.

Some analysts conclude that the Libyan example is unique.

"The politics surrounding rapprochement with Iran and Syria would be far more difficult to manage than were those with Libya," says Jon Alterman, an analyst with the Center for Strategic and International Relations in Washington, D.C.

If anything, some analysts say, the Libyan experience underscores the need for America to hold direct, face-to-face talks with its adversaries, no matter how unseemly. In fact, the United States began holding secret talks with Gadhafi under the Clinton administration, and those talks continued when President Bush came to office.

Still others say the United States was premature in "rewarding" Libya with full diplomatic ties, while Gadhafi's human-rights record remains poor. These critics see America's rapprochement with Libya not as a fairy tale but a nightmare — proof, they say, that the United States is not sincerely interested in promoting democracy in the Middle East.