Accessibility links
Surprise Fall In Jobs Does Not Dash Recovery Hopes The economy shed 85,000 jobs in December, but the unemployment rate held unchanged at 10 percent, the Labor Department said Friday. Despite the unexpected drop, many economists still predict a gradual improvement in the economy over the coming months.

Surprise Fall In Jobs Does Not Dash Recovery Hopes

Surprise Fall In Jobs Does Not Dash Recovery Hopes

New Jobs For A New Decade

The U.S. economy unexpectedly shed another 85,000 jobs in December, the Labor Department reported Friday, but the unemployment rate managed to hold steady at 10 percent, and most analysts still expect a gradual improvement in coming months.

Economists had predicted an average of just 8,000 new job losses. There was a spot of good news when the Labor Department released revised figures for November showing that the economy actually added 4,000 jobs in that month, as opposed to the loss of 16,000 that was initially reported.

"The trend is getting better even though this month's number was a little worse than economists had expected," Brian Wesbury, chief economist at Chicago-based First Trust Advisors, tells NPR.

President Obama said Friday that the overall trend on job loss is still pointing in the right direction, despite the reversal in December.

"The jobs numbers that were released by the Labor Department this morning are a reminder that the road to recovery is never straight, and that we have to continue to work every single day to get our economy moving again," Obama said.

Christina Romer, the chair of the White House Council of Economic Advisers, said in a statement that while the December numbers were "a setback," they are "consistent with the gradual labor market stabilization."

Even so, the labor force dropped sharply — a troubling sign that more people were giving up on the search for a new job and a key reason that the unemployment rate did not rise any further last month. Once people stop looking for a job, they are no longer counted in the Labor Department's figures. The unemployment rate held at 10 percent, just off a 26-year high of 10.2 percent set in October.

"I suspect that not only will the December jobs number be revised upward a bit in the months ahead, but as we go forward in this quarter ... I believe we will continue to see positive job growth and a steady decline in the unemployment rate," Wesbury says.

Most economists are predicting only a gradual recovery for the jobs market in 2010, as the nation emerges from its worst downturn since the Great Depression. Federal Reserve officials expect unemployment to decline "only gradually," according to minutes of a meeting last month that were released earlier this week. The Fed and most private economists predict the unemployment rate will remain above 9 percent through the end of this year.

More broadly, analysts believe the economy grew by 4 percent or more at an annual rate in the October-December quarter, after 2.2 percent growth in the third quarter. 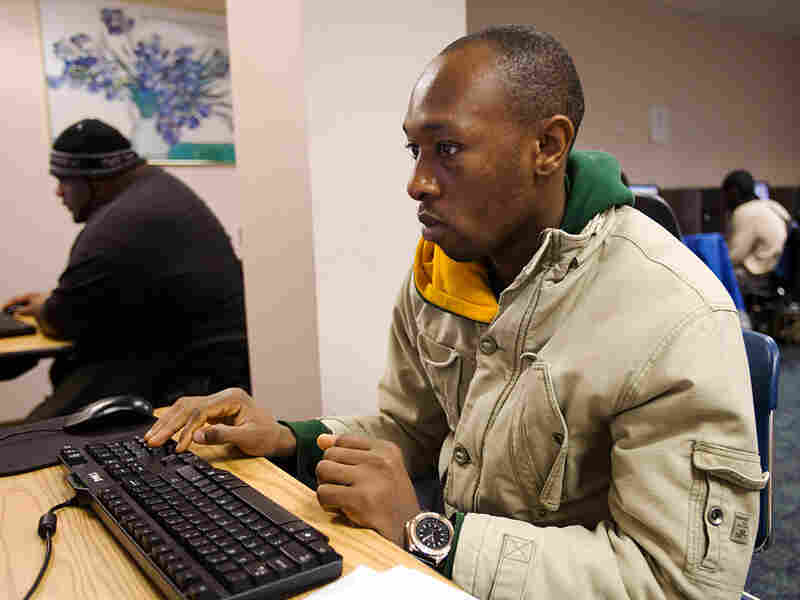 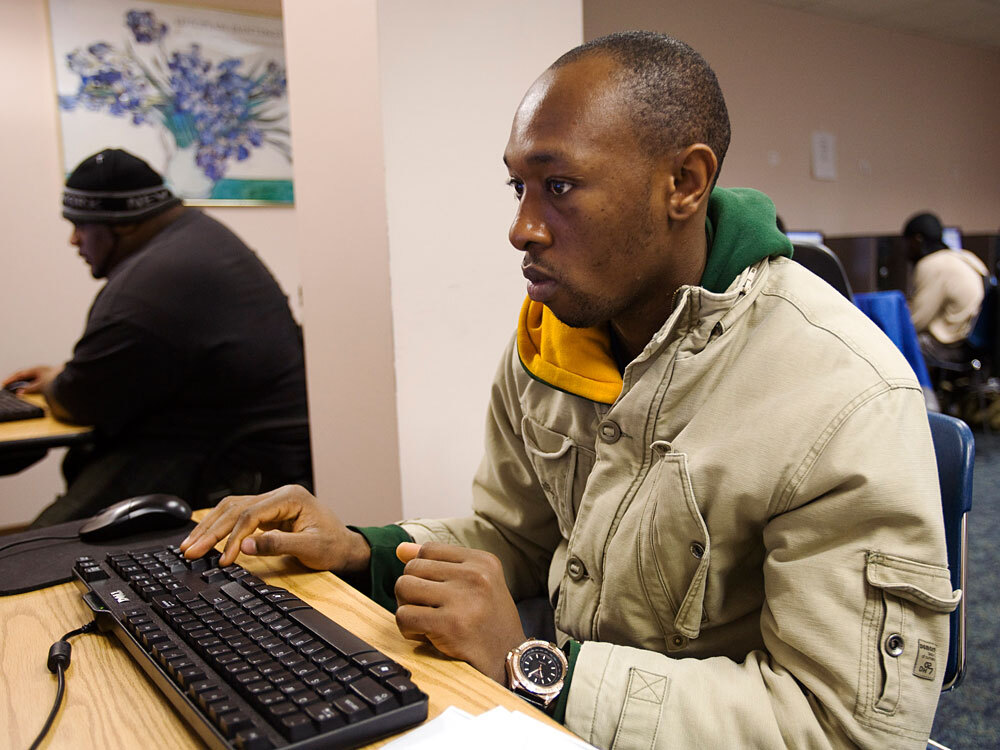 Richard Nnadi looks for a job in the restaurant industry in the New York State Labor Department's Division of Employment Services in Brooklyn, N.Y.

In 2009, "the good news ... [was] the so-called green shoots. The rate of contraction was smaller," says Alan Levenson, chief economist with T. Rowe Price in Baltimore. "The news in 2010 will be a shift into rising employment."

But if the jobs market stages only a slow recovery, confidence and spending are likely to remain low, which will weigh heavily on an economy in which consumer spending accounts for 70 percent of all activity.

Still, there was a big jump in temporary hiring, with 46,500 extra jobs, bringing the total increase in temporary employment to 166,000 since July. It's a closely watched number, because as economist Hugh Johnson points out, "Temporary help will become permanent help."

Johnson adds that that the government's 2010 census should also provide another boost. "The government will be hiring over a million people in the first and second quarter of 2010," he says. "So, at least for the short term, we'll start to see some fairly strong numbers."

The average workweek remained unchanged at 33.2 hours, near October's record low of 33. Most economists hoped that would increase, because employers are likely to add hours for their current employees before they hire new workers.

Manufacturing lost 27,000 jobs and construction shed 53,000, while retailers, the leisure and hospitality industries and the government also cut workers.

Meanwhile, a Commerce Department report on Friday showed wholesale inventories rose 1.5 percent in November, a much stronger showing than the 0.2 percent drop that economists had expected. Sales also jumped 3.3 percent, far better than the 0.9 percent rise that had been forecast.

With reporting from NPR staff and wire services