Accessibility links
Prosecutor Turns On Crusading Journalism School The Cook County, Ill., prosecutor says Northwestern University journalism students are not protected under the Illinois Reporter's Privilege Act. The students are accused of altering their results in an Innocence Project investigation. The project has helped exonerate 11 men convicted of murder. 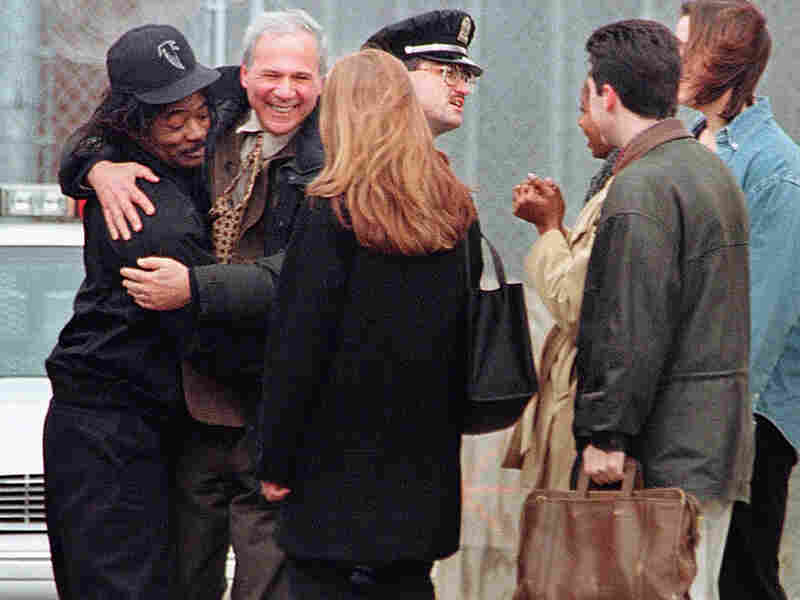 Anthony Porter (left) hugs Northwestern University journalism professor David Protess and his students outside Chicago's Cook County Jail in 1999. Porter had served more than 16 years on death row before Protess and his students developed information that led to a Wisconsin man's confessing to the 1982 double murder for which Porter was convicted. John Zich/AFP/Getty Images hide caption 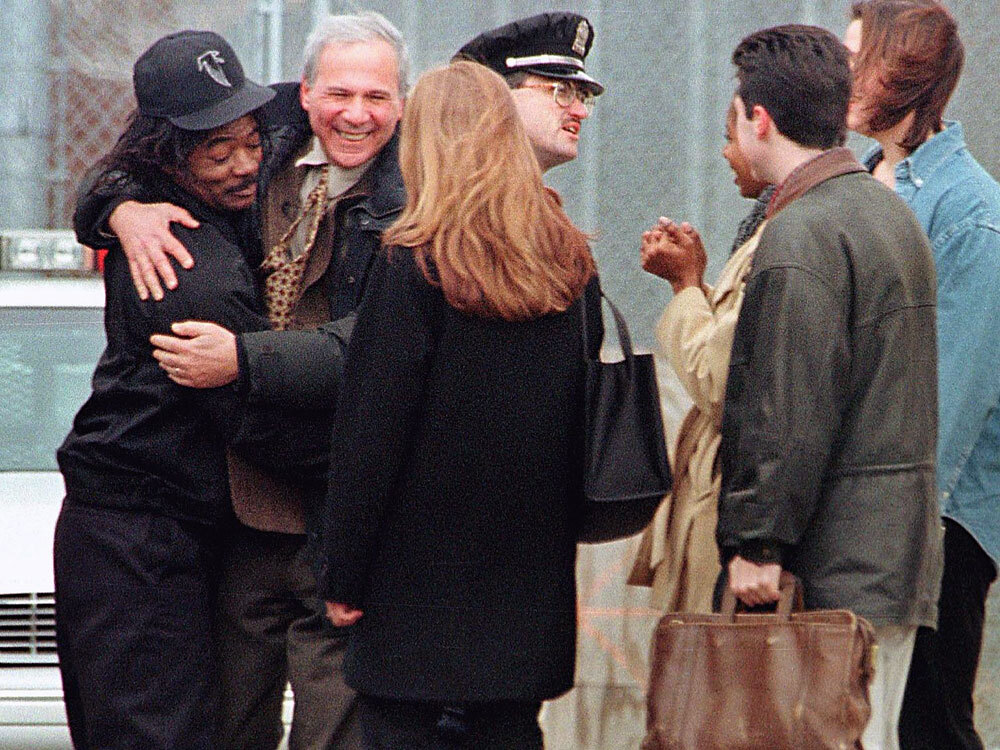 Anthony Porter (left) hugs Northwestern University journalism professor David Protess and his students outside Chicago's Cook County Jail in 1999. Porter had served more than 16 years on death row before Protess and his students developed information that led to a Wisconsin man's confessing to the 1982 double murder for which Porter was convicted.

Northwestern University journalism professor David Protess has made life hard for Illinois prosecutors for decades, as he has routinely and often successfully challenged the evidence for their convictions of murder defendants.

Protess' Medill Innocence Project has been credited with helping to exonerate and free 11 men unjustly convicted of murder.

Now, the chief prosecutor for the Chicago region is turning the tables. She is demanding unusual evidence of her own from the professor and his students: their grades, e-mails, notes and course evaluations from a project in which they're championing the cause of yet another murder convict.

Cook County State's Attorney Anita Alvarez says her office has evidence the students' research is skewed. On Monday, a hearing is scheduled in which lawyers for Protess and Northwestern will submit arguments as to why they shouldn't have to comply.

"Legally, what I take from it is that the prosecutors are on a fishing expedition," Protess says while eating in one of his favorite restaurants in the Chicago suburb of Oak Park. "Practically, I think they have an interest in paying [us] back for years of embarrassment — and paying forward to deter us."

Protess, now 63, got his start in the legendary world of Chicago journalism with undercover exposes of corruption. One of them was the legendary and controversial Mirage Bar story, in which he helped the Chicago Sun-Times buy and run a bar in North Chicago and he recorded city building inspectors demanding bribes.

Since the early 1980s, however, Protess has also been training students at Northwestern's Medill School of Journalism by having them re-report murder convictions where claims of innocence seem plausible.

"They bring a fresh perspective to an old case — they bring an energy and zeal — and they're disarming interviewers," Protess says. "When they knock on someone's door — [people] don't see someone like me standing there; they see some young idealistic college kids who want to find the truth. And often, that's the first step toward getting it."

Take the Ford Heights Four. Four black youths from the housing projects were arrested and convicted of abduction, rape and murder in the killing of a young white couple on Chicago's South Side in 1978.

Over several months in the mid-1990s, students turned up evidence that police had intimidated a key witness and prosecutors had buried another eyewitness account that implicated four other men.

A disclosure: One of those Northwestern students is now my colleague, NPR correspondent Laura Sullivan.

Protess' students even got a confession from one of the people involved in the killing. Among those freed was Kenneth Adams — who had served 18 years in prison. He shared in a $36 million settlement for wrongful imprisonment.

Adams now lives in an affluent development south of Chicago. Even now, 14 years later, Adams says he often gets up at night to stare at the stars or wander around to make sure he is not constrained by a prison cell the size of a small bathroom.

Five times Adams was offered the chance to walk free as long as he testified against his equally innocent co-defendants, and five times he refused. It is not an ordeal Adams enjoys reliving — but he does it, he says, to defend the professor.

"Without them stepping in and doing what they did, what chance would we have had?" Adams said as he sat in his spacious living room. His wife, Norma, stood nearby. "How much evidence would not have been uncovered? How many witnesses would not have been questioned and you get the truth about it?"

That notorious case helped a broader movement in the Chicago area get traction in its efforts to bring tough scrutiny to the process by which people were accused and convicted of murder. There were many important actors, including Rob Warden, formerly Protess' editor at the publication Chicago Lawyer, now the executive director of the Center on Wrongful Convictions at Northwestern Law School's Bluhm Legal Clinic.

At the Chicago Tribune, reporters such as Steve Mills and columnists including Eric Zorn have reported extensively on the misdeeds and mistakes occurring in murder investigations. Also, many local lawyers have devoted countless hours of pro bono work. Even the renowned Chicago novelist Scott Turow took up the cause.

But all involved say Protess and his students have been invaluable. In an interview, Zorn says Protess fits in a tradition of aggressive watchdog reporting in a town where information is often tightly controlled.

Zorn says even when he doesn't end up agreeing with Protess' conclusions, he believes that Protess raises important questions about the law enforcement process.

In 2003, then-Gov. George Ryan pointed to the work of the Northwestern students in commuting the sentence of every prisoner on death row.

The current case involves the effort to exonerate Anthony McKinney, who was convicted of another decades-old killing. Cook County State's Attorney Alvarez says she is reviewing that case — but needs to put the methods of the Medill Innocence Project under the microscope too.

Normally, journalists in Illinois enjoy some protections from law enforcement officials who want them to divulge their reporting methods and materials.

Bu Alvarez argues the students aren't really reporters and their research may have been rigged.

"The question of credibility has already arisen," Alvarez told Chicago Public Radio in November, "because several witnesses have given statements to the students and when we talked to them, they have recanted those statements."

In conversations over several days last week, Alvarez's press aides said they would arrange an interview with NPR for the prosecutor, but they never made her available for comment.

In court papers, Alvarez says the Northwestern team gave a key witness $60 for cab fare to a bus station. After a short drive, that witness appears to have split the money with the cabbie, gotten out and spent his share on drugs.

Alvarez suggests that the payment was intended to get the witness to switch his story — and that students were eager to find proof of innocence to get good grades from the crusading Protess.

"If these actions were taken, and if these statements were obtained that way, why would a student do that?" Alvarez said on Chicago Public Radio. "Why would they go to this extreme to get a statement?"

Protess' team got a receipt for the cab fare. He says to think someone would implicate himself in a murder for a share of $60 is ludicrous on its face. And as for the grades, he says all students get an A as long as they uncover the truth, wherever it leads.

'People Are Talking Off The Record'

He says the journalism students are acting as journalists. And that's exactly why Protess says he is adamant he will never give up the grades, the notes, the e-mails or anything else.

"If we do that, we can't go out and cultivate sources and assure them that what they're telling us won't be told to prosecutors," Protess says. "In a lot of cases, people are talking off the record."

The judge in the case has made some comments that are skeptical of lawyers' earlier efforts to have the prosecutors' subpoena dismissed. And, as former New York Times reporter Judith Miller can attest, such reluctance can ultimately come with a cost.

Miller served nearly three months in jail for refusing to tell a U.S. attorney who had told her the name of an undercover CIA agent, though there's less protection for journalists in federal law.

Protess says his fight is worth it. At such times, he says, he thinks back to such cases as the Ford Heights Four and the vindication of Kenny Adams.