Accessibility links
For Some, Lasik Brings More Problems Than Solutions An increasing number of patients say they have experienced significant complications after Lasik. Problems like dry eye, glare and double vision have impaired their ability to function and significantly affected their quality of life. The FDA has decided to investigate further and hopes to identify what puts people at risk for complications. 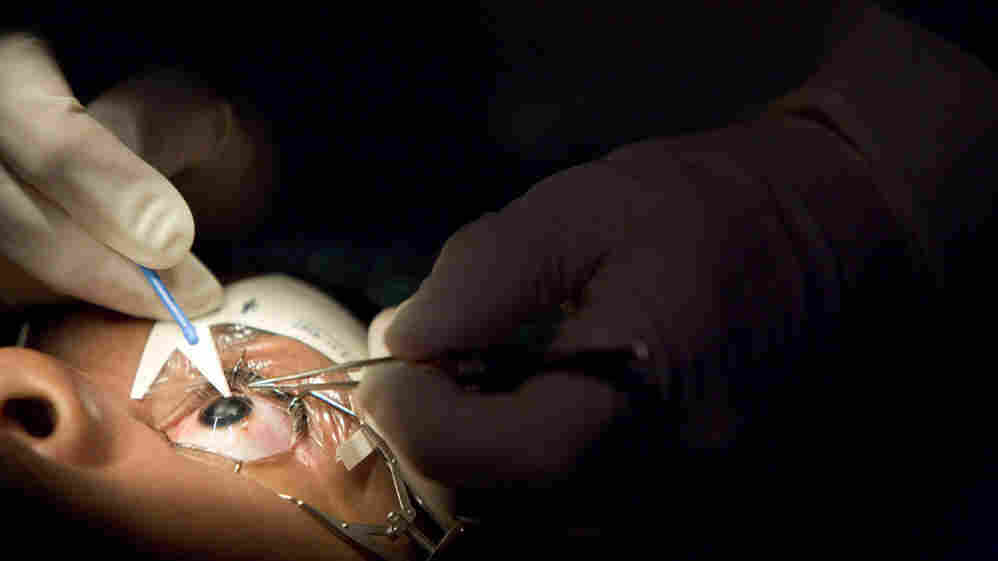 Lasik eye surgery can correct nearsightedness and farsightedness for many, but not everyone is a good candidate. Experts say it's important to talk to a doctor about risks and precautions before undergoing the surgery. James Leynse/Corbis hide caption

Patel is a researcher and specialist in corneal surgery and transplantation at the Mayo Clinic. Mutti is a professor of optometry and a researcher at Ohio State University.

Check out our Web chat for their answers to audience questions.

To date, more than 17 million people worldwide have had Lasik eye surgery in hopes of relegating glasses and contacts to the waste bin. And each year, an estimated 700,000 Americans opt for the procedure, which uses a laser to vaporize portions of the cornea and reshape it to improve vision. Lasik surgery can correct nearsightedness and farsightedness, as well as astigmatism, an imperfection in the curvature of the eye that can cause blurred vision.

About 95 percent of patients are happy with the results of Lasik (which stands for laser-assisted in situ keratomileusis), the American Academy of Ophthalmology reports, based on a compilation of worldwide surveys.

But there have been an increasing number of complaints from unhappy patients who say they have experienced significant problematic complications after Lasik. They've been reporting that problems like dry eye, glare, double vision and starbursts (blurring around objects) have impaired their ability to function day-to-day and significantly affected their quality of life, says Dr. Malvina Eydelman of the Food and Drug Administration. In response, the FDA has decided to investigate further. 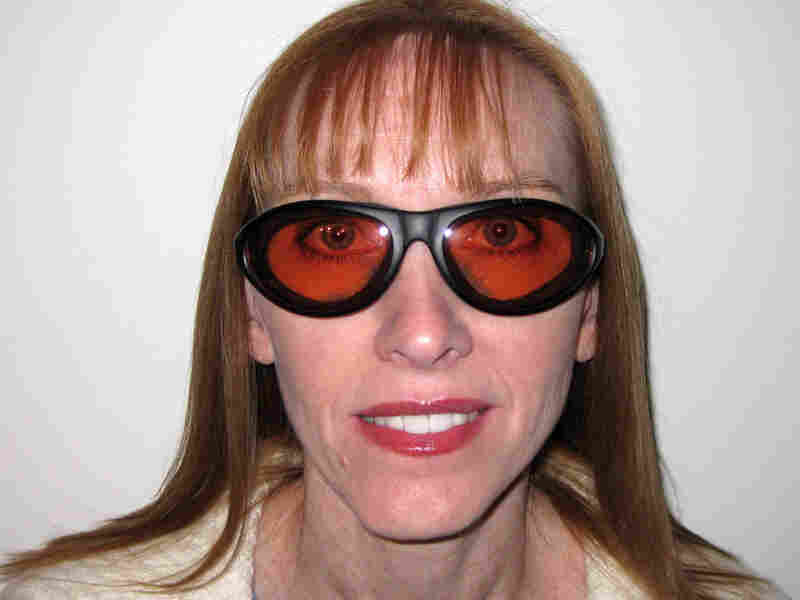 After having Lasik eye surgery, Paula Cofer says she now needs these moisture-retaining glasses to protect her eyes when the air is dry, like at the gym or outside on windy days. Courtesy of Paula Cofer hide caption 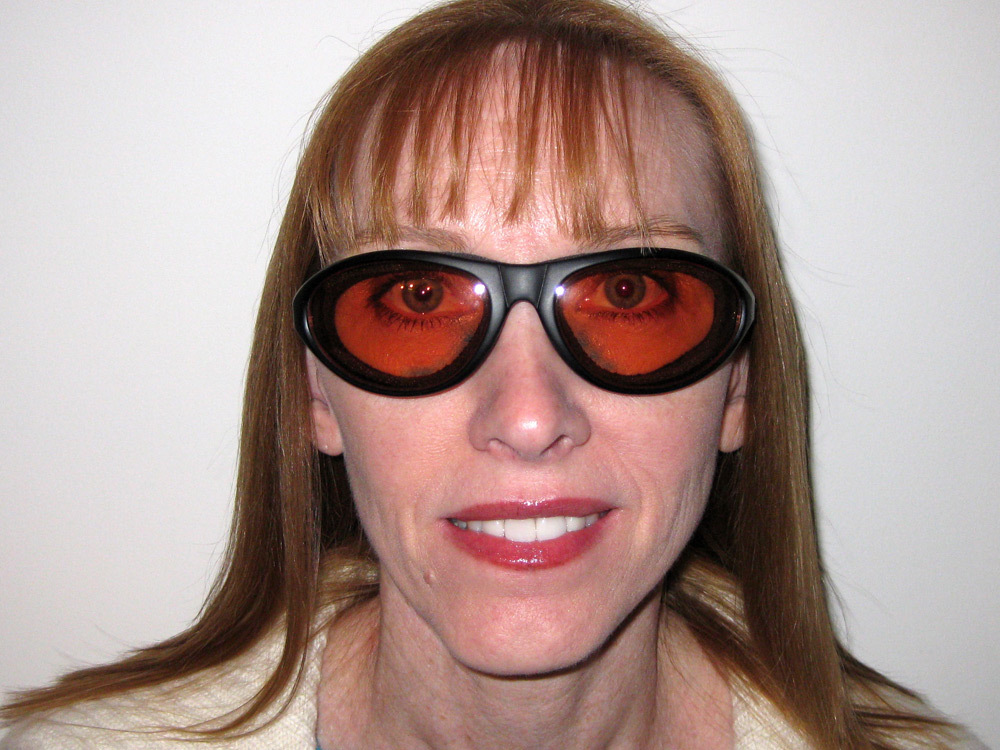 After having Lasik eye surgery, Paula Cofer says she now needs these moisture-retaining glasses to protect her eyes when the air is dry, like at the gym or outside on windy days.

Most experts agree that there are no scientifically sound studies looking at long-term problems resulting from Lasik. In large part, that's because the surgery is relatively new and was FDA-approved just over a decade ago, in 1998.

Paula Cofer of Tampa, Fla., has experienced many of these problems. Cofer, 51, had Lasik in 2000. She thought it made good sense at the time, she says: The idea of not having to hassle with glasses and contacts was quite appealing. She even expected to save a bit of money, not having to buy new glasses, contacts or expensive eye drops.

Ten years later, she still suffers with severe dry eyes and blurry vision. "My eyes burn all the time," she says, and "require constant attention." She uses eye drops, eye rinses, eyelid scrubs, a mask at night to keep dry air at bay, and even wears moisture-retaining goggles.

Big and bulky, the goggles are nothing like small swimmers' goggles, she says. "I look like a fly. They're very unattractive." Cofer wears them inside, where fans suck moisture from the air, like at the gym. And she wears them outside when the air is dry, especially on windy days.

Report A Problem With Lasik To FDA's MedWatch

Cofer can no longer drive because halos (blurring around objects), glare and starbursts from oncoming cars distort her vision completely. And the coup de grace: Cofer still needs glasses and contacts.

The bottom line is that Cofer was simply not a good candidate for Lasik. Her large pupils make laser correction difficult, and she's prone to severe dry eye.

But Cofer says no one told her about these potential problems. Eydelman says the FDA has stepped up efforts to ensure that doctors provide patients with information about risks and precautions before having Lasik. That includes things like large pupils, thin corneas and undiagnosed dry eye.

Eydelman says the agency is also looking into misleading advertising and claims that the surgery will make you "glasses-free" and have "20/20 vision." She says patients need to make sure that they understand that even in perfect-case scenarios, they may no longer need glasses for distance vision, but there is a high likelihood that they'll need glasses for reading.

Studying Quality Of Life After Lasik

FDA's Quality Of Life Project Studies Lasik
More About Lasik From The American Academy Of Ophthalmology
Some Patients Say Life After Lasik Not Perfect May 1, 2008
Q&A: Doctors On Lasik Surgery April 30, 2008
Your Questions On Lasik Eye Surgery Oct. 19, 2006

The FDA is beginning a study of thousands of Lasik patients nationwide. In partnership with the National Eye Institute and the U.S. Department of Defense, federal health officials hope to determine the percentage of patients with significant quality-of-life problems after Lasik surgery, and identify predictors of the problems.

The study is expected to be completed by 2012. Health officials hope the findings will enhance understanding of the risks of Lasik and reduce the number of patients who experience adverse effects.

Dr. Sanjay Patel, a researcher and specialist in corneal surgery and transplantation at the Mayo Clinic, says he tells his patients they will likely experience dry eyes, halos and glare immediately after surgery. But for the vast majority of patients, these problems will disappear within one month.

Patel says the FDA study will be helpful in identifying patients who might be more vulnerable to problems. "Right now, we do not have good data to actually give patients a percentage to say there's an X percent chance you're going to have dry eyes after refractive surgery."

In the meantime, recent advances in treatment and technology should help patients who now suffer complications, says Dr. Marguerite McDonald, the spokeswoman for the American Academy of Ophthalmology and president of the International Society of Refractive Surgery.

Ten years ago, says McDonald, "we didn't have as many things in our bag of tricks. Now, we have a lot of things that can treat dry eye. They say 'never say never,' but I have personally not encountered someone who couldn't be treated very successfully with the new things that we have at our disposal."

There are new medications, eye drops and better plugs for tear ducts, she says. In addition, there have been significant advances in laser technology itself, which decrease the risk of nighttime halos and glare.

Wavefront-guided Lasik adds an automatic measurement of more subtle distortions than just nearsightedness, farsightedness and astigmatism. McDonald says this means the surgery can be more effective and reduce the odds of complications.

FDA officials encourage patients to report any problems related to Lasik by clicking on the FDA Lasik Web site.