Accessibility links
Tide Of Arab-Turk Tension Rises Amid Water Shortage The headwaters of the Middle East's great rivers, the Euphrates and Tigris, originate in Turkey, which controls flow of the waters to the Arab world downstream. A three-year drought has devastated Syria and Iraq, fueling resentment against the Turks. 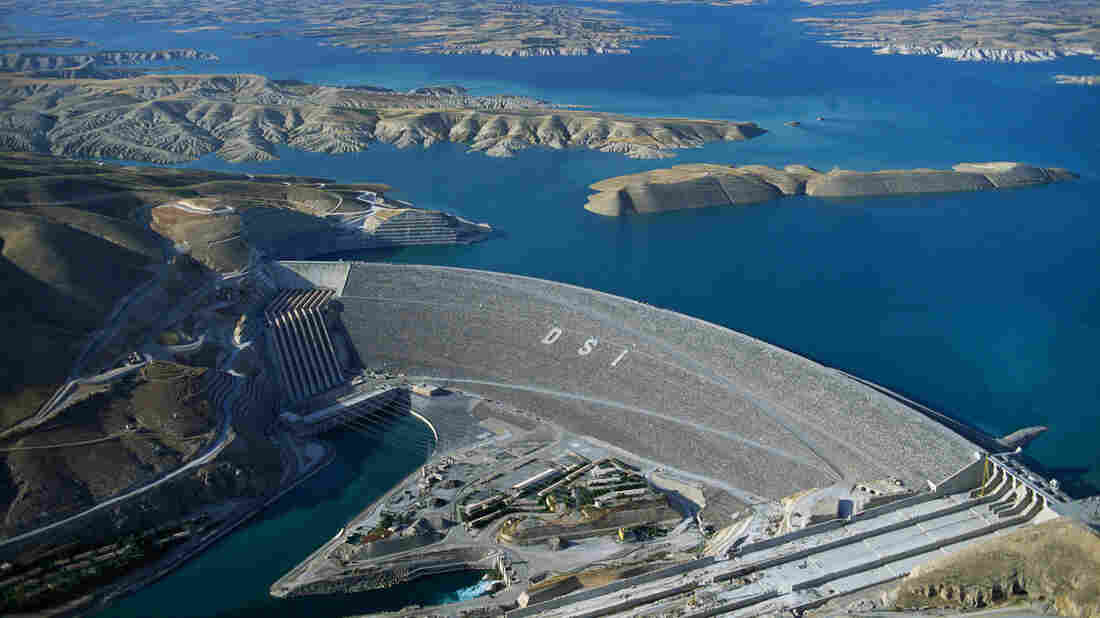 The massive Ataturk Dam (shown here in 1992), in southeast Turkey, harnesses water for one of the biggest irrigation and electric power schemes in the world. A drought and other factors have created an acute water shortage in the Middle East, and resentment in countries downstream from Turkey is growing. Ed Kashi/Corbis hide caption 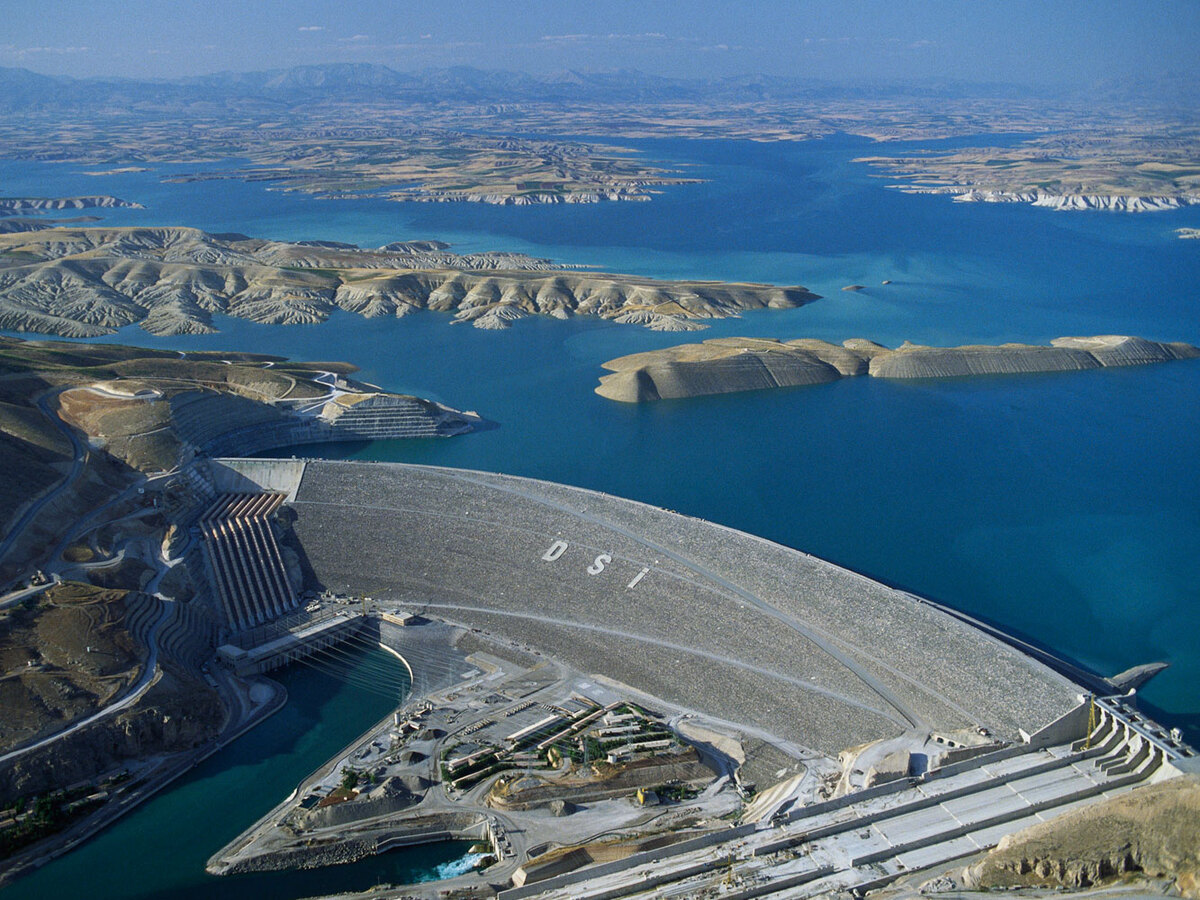 The massive Ataturk Dam (shown here in 1992), in southeast Turkey, harnesses water for one of the biggest irrigation and electric power schemes in the world. A drought and other factors have created an acute water shortage in the Middle East, and resentment in countries downstream from Turkey is growing.

Turkey's Bosporus strait is one of the world's busiest shipping lanes for oil transport. On a recent day, more than a dozen tankers are on the horizon, but none of the oil comes from Turkey. The resource that counts here is water. Turkey is one of the only countries in the region to have enough water for its population.

"The Arabs, the Iraqis and the Syrians feel very much that Turkey is asserting itself as a regional hydrological superpower," says Hussein Amery, a water specialist at the Colorado School of Mines.

Turkey is a water superpower, he says, because the headwaters of the great rivers — the Tigris and Euphrates — are in the Turkish mountains. Over the years, the Turks have built dozens of dams limiting the flow to the Arab world downstream.

But a three-year drought has devastated farm and grazing lands in large parts of the Middle East, displacing hundreds of thousands of people. In Syria and Iraq, the water shortage has fueled resentment against the Turks, Amery says.

Between 2007 and 2008, the drought forced residents to abandon about 160 villages in Syria and scores of villages in Iraq, according to Amery.

"Crops were not growing, cattle were dying, and their source of livelihood just ceased to be," he says.

In Turkey, Gun Kut, a water expert at Istanbul's Bogazici University, expresses an often-heard criticism in response to Arab complaints: "Quit wasting the water and there will be enough for everybody."

"Simply insisting on others to release more and more water while the population is going up, the need for food is going up, won't work," he says.

Droughts for several consecutive years and the damming of the Tigris and Euphrates rivers have the Middle East facing its worst water crisis in decades.

In southeast Turkey, the Euphrates River is clear, blue and deep. The Ataturk Dam harnesses water for one of the biggest irrigation and electric power schemes in the world, the Southeastern Anatolia Project.

When the multibillion-dollar project was inaugurated more than a decade ago, then-President Suleyman Demirel said neither Syria nor Iraq could lay claim to Turkey's water, any more than Turkey could claim Arab oil.

"We have a right to do anything we like," Demirel said at the dam's opening ceremony in 1992.

Turkey's position has softened since then, but former diplomat Faruk Logoglu says Demirel's statement has caused tension for years.

"Turkey, in my judgment, properly claims that these waters originate in Turkey and we have the first say," he says. "They have oil. We don't have oil. They have the capital, they should invest."

Kut, the water expert, says countries in the region should invest in water efficiency and, more importantly, agree to regional management of the Euphrates and the Tigris as if the borders did not exist. Turkey has renewed this proposal at a time when relations with its Arab neighbors are improving.

At the same time, the drought threatens the stability of Iraq and Syria, says Josh Landis, an American academic who writes an influential blog on Syria.

"How a little country like Syria — which is badly run economically, is coming out of a socialist past, is trying to liberalize — is going to be able to provide water to all of its people is a mystery," he says.

There was a time that the Ottoman Empire controlled the waters of the Tigris and Euphrates.

These days, hawkers sell wooden flutes to tourists outside the palaces, which are now museums as well as monuments to the 800-year empire. Turkey's aggressive outreach to the Arab Middle East is sometimes called neo-Ottomanism. The new approach includes binding neighbors together through commercial ties, gas and oil pipelines, and a shared electric grid.

And finally, it seems, after years of tension, there are signs of agreement on regional water management, says Amery.

"I would tell the Syrians, Turks and Iraqis to get together, cooperate in managing the Tigris and Euphrates as the one ecosystem that it is. It requires a new way of thinking about farming and irrigation," he says.

In the past, Iraq and Syria have threatened war over water. Now, the region is warming, the population is growing — a massive water shortage could be devastating.

This week, Turkey and Syria agreed to joint management of some water resources, after being at odds for years.