Accessibility links
Examining France's Psychological Abuse Move The French government is planning legislation that would make psychological violence between a couple punishable by law. Psychologist Steven Stosny, an expert on the subject, says the key is to distinguish between abusive acts and an abusive relationship.

The French government is planning legislation that would make psychological violence between a couple punishable by law. Psychologist Steven Stosny, an expert on the subject, says the key is to distinguish between abusive acts and an abusive relationship.

Psychological abuse is often called the wound no one can see. Because of that, it tends to get less attention than physical abuse. We called on psychologist Steven Stosny, who has written several books on the subject, to help us understand what exactly is psychological abuse.

D: You have to distinguish between abusive acts and an abusive relationship. Psychological abusive behavior is just hurting the feelings of someone, trying to make them feel inferior; they are not as good as you. And that can happen in any relationship. You're upset, you say the wrong thing, you call a name, you're insulting or demeaning. But then you apologize for it and you reconnect. An abusive relationship is where you do those behaviors systematically to control or dominate another person, to get them to submit to what you want. And you don't apologize. You feel self-righteous. You made me do it or you had it coming, or if you were a better person, I wouldn't have to do that.

NORRIS: How prevalent is that in relationships?

NORRIS: One in four?

D: Yes. It's a precursor to violence; about 40 percent of them will become domestic violence. But psychologically speaking, it actually does more damage than physical abuse. The only time that's not true is if the physical abuse does some kind of crippling or maiming or disfigurement. Otherwise, psychological abuse is more - has more psychological effects. You feel worse about yourself for longer.

NORRIS: What kind of toll does it take over time, then?

D: It impairs your ability to sustain interest, trust, compassion and love. In another words, you can't love without hurt. We are actually programmed to believe what people we love say and how they treat us, to be about us. I call it the mirror of love. The only way you know how lovable you are, and how valuable your love is to other people, is by interacting with people you love. So if somebody hits you, it's a little bit easier to see that that person has a problem, at least an impulse-control problem. But when they're demeaning you or making you feel inferior, you're actually psychologically programmed to believe that's your problem.

NORRIS: Are there triggers?

D: Yes. There is an interesting gender distinction of whether a man is abusive or a woman is abusive. If a woman is abusive, she will usually hit the male vulnerabilities of dread of failure as a provider, protector, lover or parent. So she will say, you know, I could have married somebody who made more money than you. I had better sex with my last boyfriend. You're a terrible parent, and I don't feel secure with you. When a man is abusive, he tends to hit fear vulnerabilities. He'll make her afraid that he is going to hurt her, or he'll trigger her fear of isolation that nobody will love you, nobody will care about you; and her fear of deprivation: She can't have a nest, she can't buy anything for the house, she can't buy anything for herself.

NORRIS: If someone is listening to this and they recognize what you are describing in their own household, what should they do?

D: It's really hard to stop on your own once it becomes habituated behavior. So, they are going to need help to do it. If it's not too entrenched, ordinary marriage counseling can help. If it becomes habituated, though, they need something more heroic. Like, we do three-day boot camps where it's eight hours a day for three, sometimes four days. It needs something that drastic to break through the habits. Once you're in the habit of hurting someone you love, it's very hard to stop the habit.

NORRIS: Mr. Stosny, thank you very much for talking to us.

NORRIS: Steven Stosny is an expert on psychological abuse. He is also the author of the book, "Love Without Hurt." 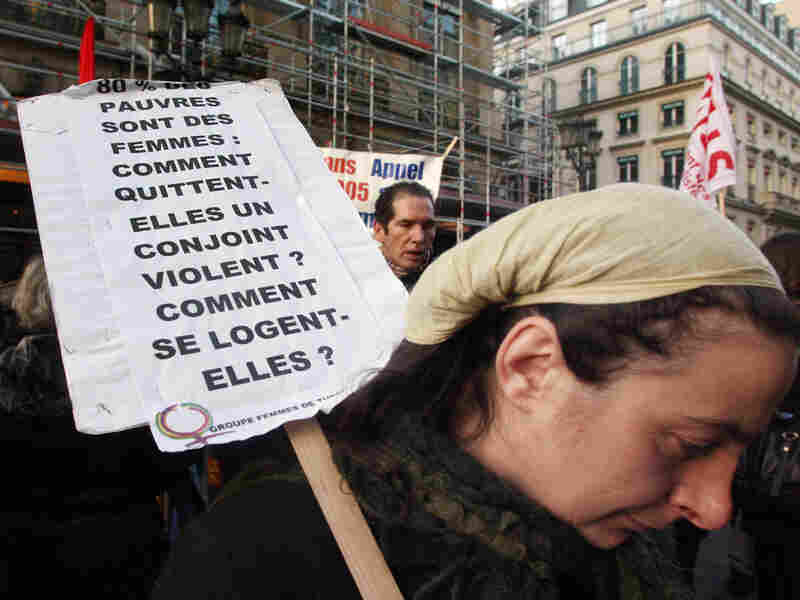 A woman holds a banner that refers to poor, powerless women facing domestic abuse, at a rally in Paris in 2007. Francois Guillot/AFP/Getty Images hide caption 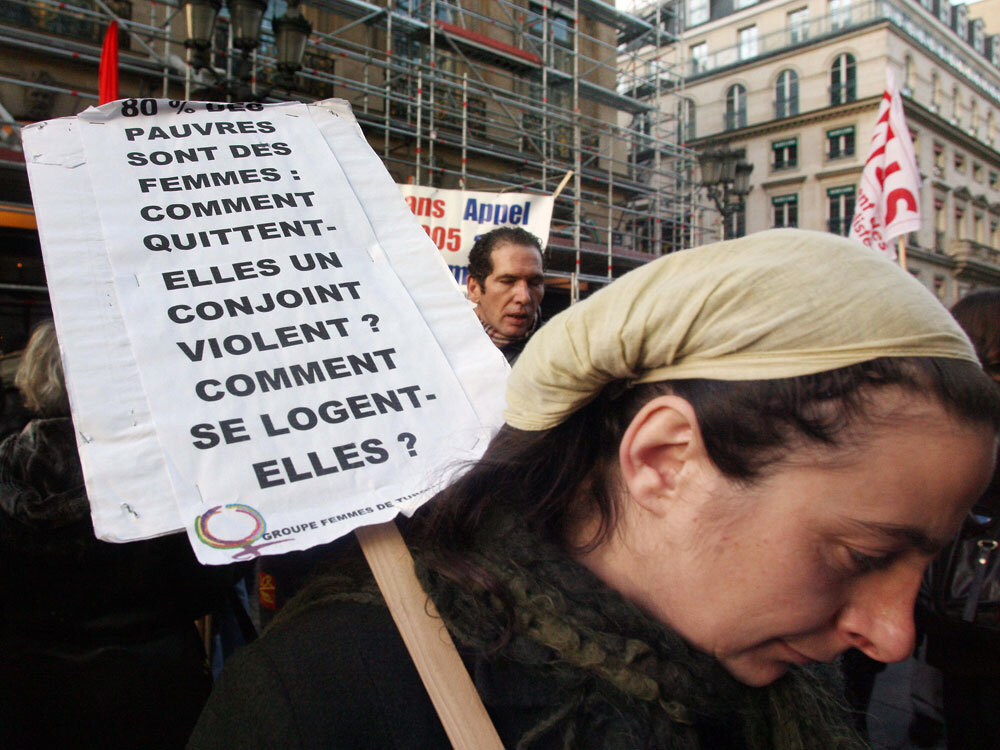 A woman holds a banner that refers to poor, powerless women facing domestic abuse, at a rally in Paris in 2007.

A proposed law in France would make psychological violence in marriages and among cohabitating couples a criminal offense. Supporters say that if the law passes, it would be the first of its kind in the world.

The bill's aim is to protect women from the verbal threats and intimidation that often lead to physical violence. But skeptics say verbal abuse is next to impossible to prove, and that the law would clog the courts with "he said, she said" cases.

The proposed law covers every kind of insult, including repeated rude remarks about a partner's appearance, false allegations of infidelity and threats of physical violence.

There are situations where the man constantly degrades the woman with his remarks and destroys her, little by little.

The French parliament is expected to approve the legislation in February, and the government says the law will be in place within six months. If convicted, violators could face fines or jail time.

Some media reports have poked fun at the legislation, jibing that screaming at your wife could now make you a felon in France.

But parliamentarian Martine Billard, who helped draft the bill, says psychological abuse is a serious matter.

"There are situations where the man constantly degrades the woman with his remarks and destroys her, little by little. And this is often done in front of the children," he said. "This law will allow these women to bring charges and rebuild their lives."

Billard rejects critics who say the new law would allow couples to be hauled in for having an argument. She says it must be proved that the abuse is repeated and done with the intention of destroying the victim's dignity.

France already has a law against psychological harassment in the workplace. This one would simply apply an equivalent standard to the home front, Billard says.

A woman dies every two days at the hands of her husband or partner in France, according to crime statistics. The French government recently declared ending violence against women a national cause. Several chilling public-service ads on television warn viewers about conjugal violence, while giving a new telephone hot line to report it.

While men inflict physical violence, many people say women engage in psychological violence. We foresee a dangerous situation where this law will lead to charges against the victims by the perpetrators.

Viviane Monnier, who runs a women's shelter in Paris

One TV spot shows viewers how kids learn violence from their parents. Two young children are playing dress-up and having tea. When the tiny wife mistakenly spills some tea in front of her tiny husband, an adult-style clash unfolds.

French Prime Minister Francois Fillon recently unveiled an array of new measures to fight conjugal violence. Among them: electronic bracelets for violent repeat offenders, more women's shelters and booklets about gender equality to be handed out to new immigrants.

"And this new law will allow us to react to insidious situations where the violence leaves the victims destroyed psychologically, but with no physical trace," Fillon said.

On a recent afternoon at a women's shelter in northeast Paris, several mothers and their young children relaxed in a small living room with a children's play area in one corner and a washing machine in another. The shelter provides a temporary escape and counseling for women abused by their partners.

But shelter director Viviane Monnier says that she fears the new law, because it also applies to men, will end up being used in a perverse manner.

"While men inflict physical violence, many people say women engage in psychological violence. We foresee a dangerous situation where this law will lead to charges against the victims by the perpetrators, who will claim they are the victims of verbal abuse," Monnier said.