Accessibility links
Michigan Seeks High Court Help On Asian Carp The Asian carp is at the center of a dispute between Illinois and its neighbors. Michigan and other Great Lakes states are concerned the ravenous, invasive species could infest the lakes through shipping locks in the Chicago area, and they want the Supreme Court to issue an injunction to close the locks. But opponents are concerned about cargo and jobs. 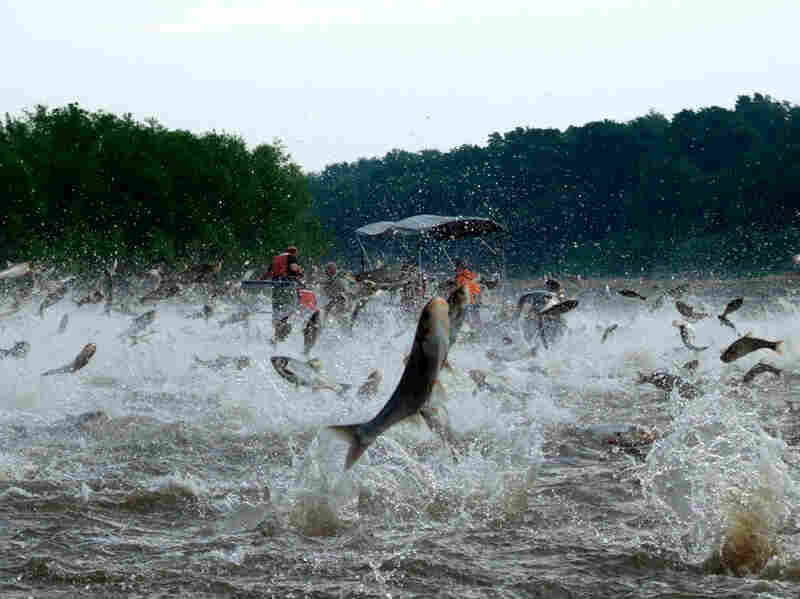 Silver carp jump out of the Illinois River. Michigan has asked the U.S. Supreme Court to close the shipping locks near Chicago to keep the invasive species from invading the Great Lakes. But Illinois and opponents are concerned about cargo and jobs. Nerissa Michaels/AP/Illinois River Biological Station via the Detroit Free Press hide caption 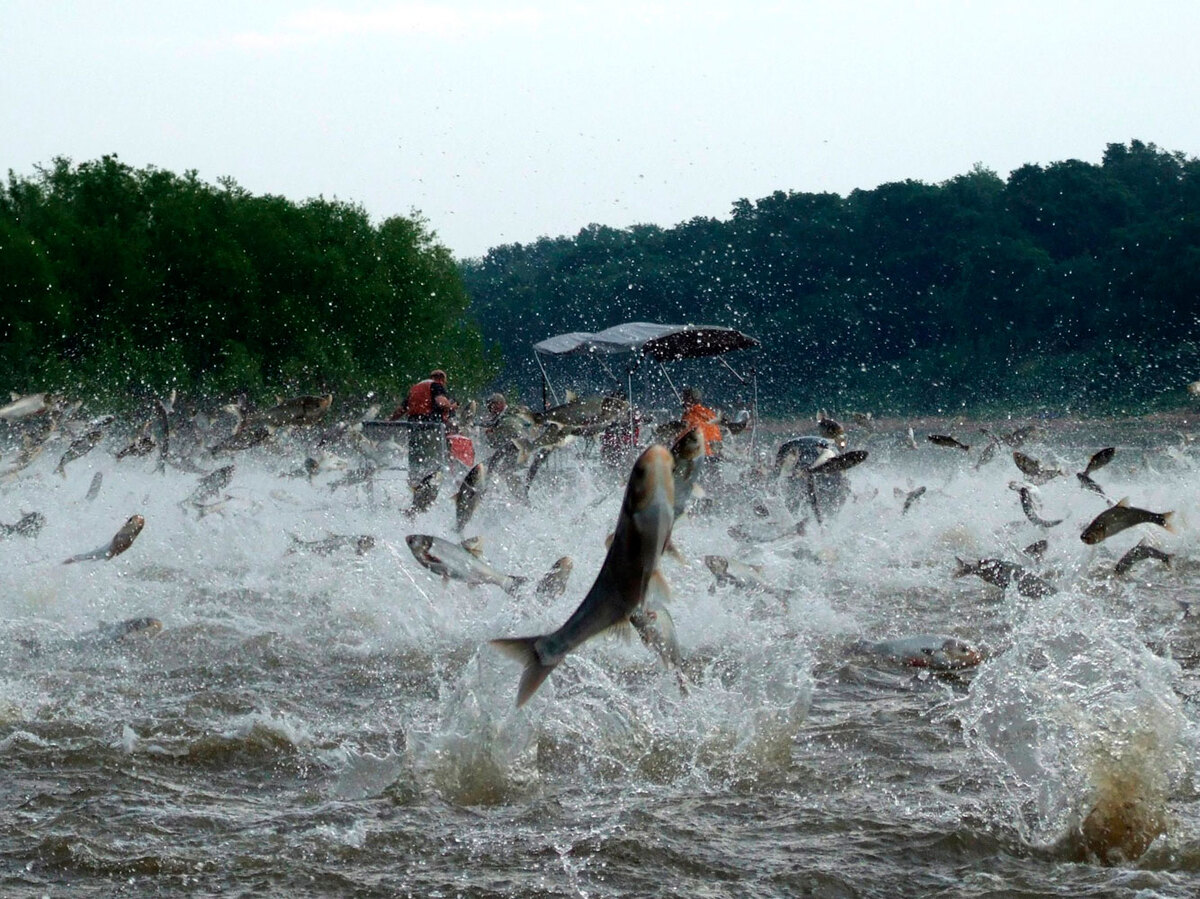 Silver carp jump out of the Illinois River. Michigan has asked the U.S. Supreme Court to close the shipping locks near Chicago to keep the invasive species from invading the Great Lakes. But Illinois and opponents are concerned about cargo and jobs.

The U.S. Supreme Court decided Friday not to hear a dispute between Illinois and some of its neighboring Great Lakes states — but it could still take it up as early as next week.

That dispute is over a big, ugly fish that the states and conservationists want to keep from getting into the Great Lakes — the Asian carp.

With the huge, voracious invasive species of fish getting ever closer to entering Lake Michigan through Chicago, Michigan — with the support of six other Great Lakes states — is asking the Supreme Court to order the closure of navigational locks between Lake Michigan and the Chicago and Calumet rivers.

The petition asks the Supreme Court to reopen an 88-year-old lawsuit over Chicago's diversion of water from Lake Michigan.

History Of The Lawsuit

In 1900, the city of Chicago reversed the flow of the Chicago River.

It was a remarkable engineering feat for its time, utilizing canals dug by man, mule and dynamite so the city could send its sewage and industrial pollution away from its drinking water source in Lake Michigan.

The man-made waterways also established a vital shipping connection between the Mississippi River and the Great Lakes.

But other Great Lakes states cried foul and sued in 1922 over concerns the diversion would reduce Lake Michigan water levels.

After decades of squabbling and negotiations, the state agreed to a consent decree in which the Supreme Court ruled Chicago could continue to flush Lake Michigan water out of the Great Lakes watershed, but limiting Chicago's diversion to no more than 2.1 billion gallons a day.

But the high court left open the possibility that the states could reopen the case if they could show that the Chicago water diversion is causing harm.

Michigan Attorney General Mike Cox says that harm is arriving in the form of Asian carp, a prolific, invasive species of fish that can grow to be 4 feet long and weigh up to 100 pounds.

"They devour plankton, algae and other material on such a large volume that they have the potential of destroying every Great Lakes fishery, whether it's Lake Michigan, Superior, Erie, Ontario or Huron," Cox says.

Cox filed a petition Dec. 21 asking the Supreme Court to force Illinois, the Army Corp of Engineers and Chicago's Water Reclamation District to at least temporarily close the locks between Illinois' waterways and Lake Michigan.

All the other Great Lakes states — Wisconsin, Minnesota, Ohio, Indiana, New York, Pennsylvania and the Canadian province of Ontario — are supporting Michigan's legal action, which also asks that long-term action be taken to permanently separate Illinois' carp-infested waterways from the Great Lakes watershed.

Cox and the other states worry that if the Asian carp get through those Chicago locks, they will crowd out native species of fish in the Great Lakes, causing an ecological and economic disaster.

But nearly 17 million tons of cargo are shipped through those locks each year, according to the industry group The American Waterways Operators, adding an estimated $1.5 billion to the regional economy.

"Coal, steel coils and rods, salt for the roadways, sand for mixing concrete and aggregate rock," are just some of the materials shipped through Chicago's locks, said Bill Russell of Lemont, Ill.-based Illinois Marine Towing.

His company's nine tow boats operate 24 hours a day, all year round, even on these bitterly cold and blustery days of January.

Shipping those materials over land would add more than 1 million trucks and tens of thousands of rail cars, increasing pollution and congestion.

Closing the locks could cost hundreds, if not thousands of jobs — including the 125 at Illinois Marine Towing.

"Without this river system being open and without the locks, our company would cease to exist because we wouldn't have anything to move if these barges couldn't travel in and out of Chicago," Russell said.

The state of Illinois and the Obama administration, defending the Army Corp of Engineers, cite these and other economic, health and flooding concerns in their briefs opposing the Michigan petition to close the locks.

But Illinois and federal officials say they do agree with Michigan and the other states that the Asian carp threat is real and imminent.

Scientists say Asian carp DNA has been detected just seven miles from an entryway to Lake Michigan, though some other scientists question the accuracy of the DNA sampling method.

Local, state and federal agency officials along with experts and advocates for the lakes will discuss all options for keeping the invasive species out of the Great Lakes in a meeting in Chicago on Tuesday as they wait to find out if the Supreme Court will consider ordering a preliminary injunction to shut the Chicago locks.