Accessibility links
Web 2.0 Suicide Machine: Erase Your Virtual Life If you're on Facebook or some other online community, you know how easy it is to fritter away hours in the Twitterverse. Want your real life back? One Web site will help you end it all — virtually. 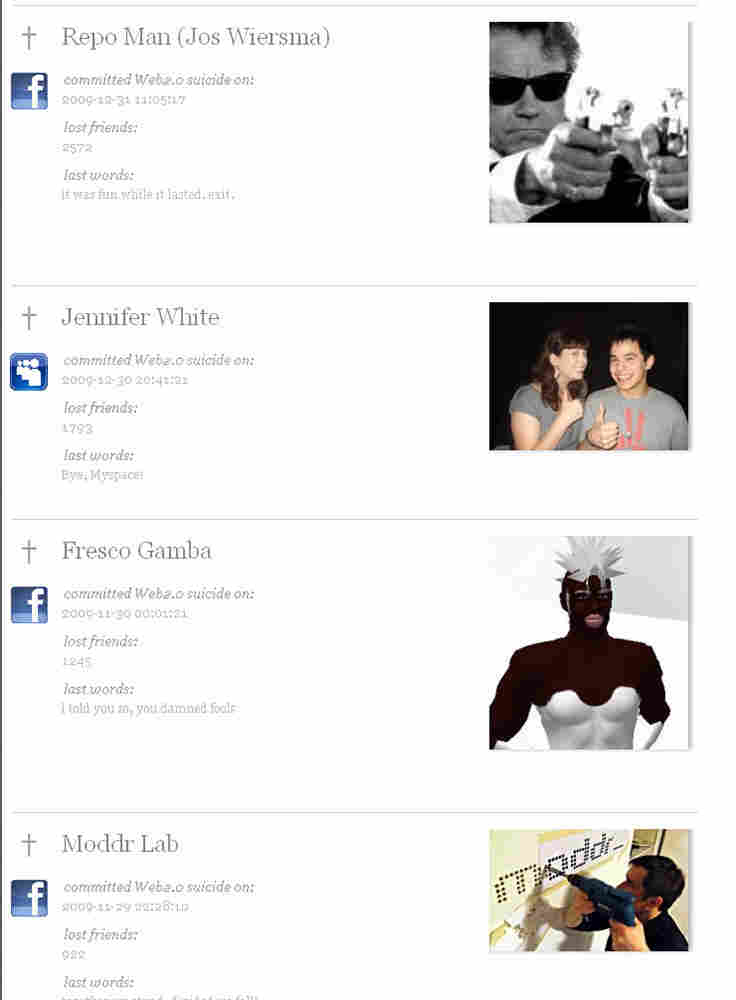 Many of us spend time at social-networking sites like Facebook, MySpace or LinkedIn. If you use those sites, you know how easy it is to happily fritter away hours in the Twitterverse or some other online community.

But what happens if you get sick of all those messages on your Facebook wall? If you just can't stand the chatter anymore?

Now one Web site is encouraging you to end it all — virtually.

"It doesn't make your life better," an introductory video on the site coaxes. "You always think you're missing something. And above all, it makes you more stupid."

The idea of the "Web 2.0 Suicide Machine" is to abandon your virtual life — so you can get your actual life back, Gordan Savicic tells NPR's Mary Louise Kelly. Savicic is the CEO — which he says stands for "chief euthanasia officer" — of SuicideMachine.org.

The site is the work of group of artists, designers and programmers based in the Netherlands who wanted to create a way to let people destroy their social networking accounts.

"Basically, we try to remove as much content as possible," Savicic says. "We change the profile picture and the password so you can't log in anymore."

Once you've decided to go through with it, all you need to do is give the Suicide Machine some information and hit a little button that reads "commit." Then you can sit back and watch as your virtual life flashes before your eyes.

The Suicide Machine boasts around 900 users, more than 58,000 friends unfriended and nearly 231,000 Tweets removed. It's so deadly, in fact, that Facebook blocked the service last Sunday.

In a statement earlier this week, Facebook said the Suicide Machine violates their rules of user interaction. The company says it is "currently investigating and considering whether to take further action."

"They basically didn't like the idea that we are unfriending other people's accounts," Savicic says. "We still have to decide how we react on that."