Accessibility links
Mystery Of The Dimming Star Coming To An End? The star Epsilon Aurigae has one of the longest eclipses on record — almost two years. The star has puzzled astronomers for centuries. Now, data from NASA's Spitzer Space Telescope is shedding new light on the mystery. 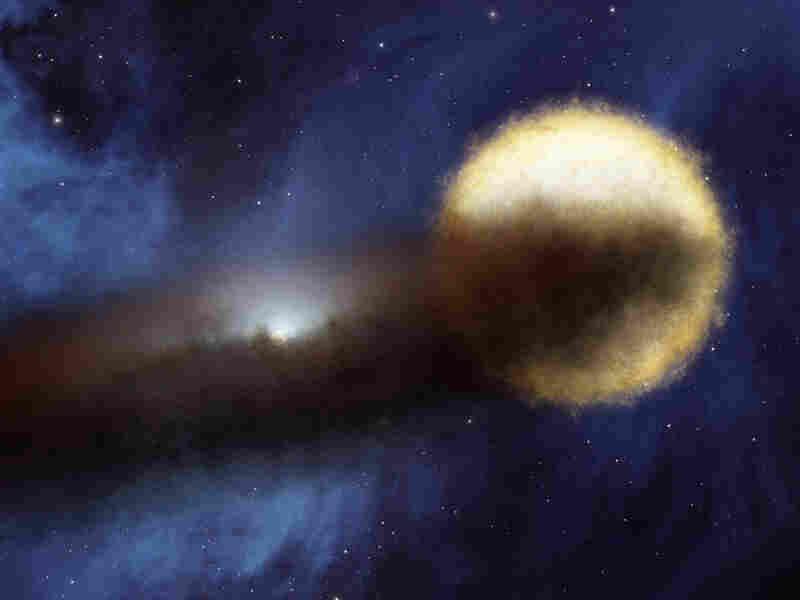 An artist's conception of Epsilon Aurigae and its dusty companion. NASA/JPL-Caltech hide caption 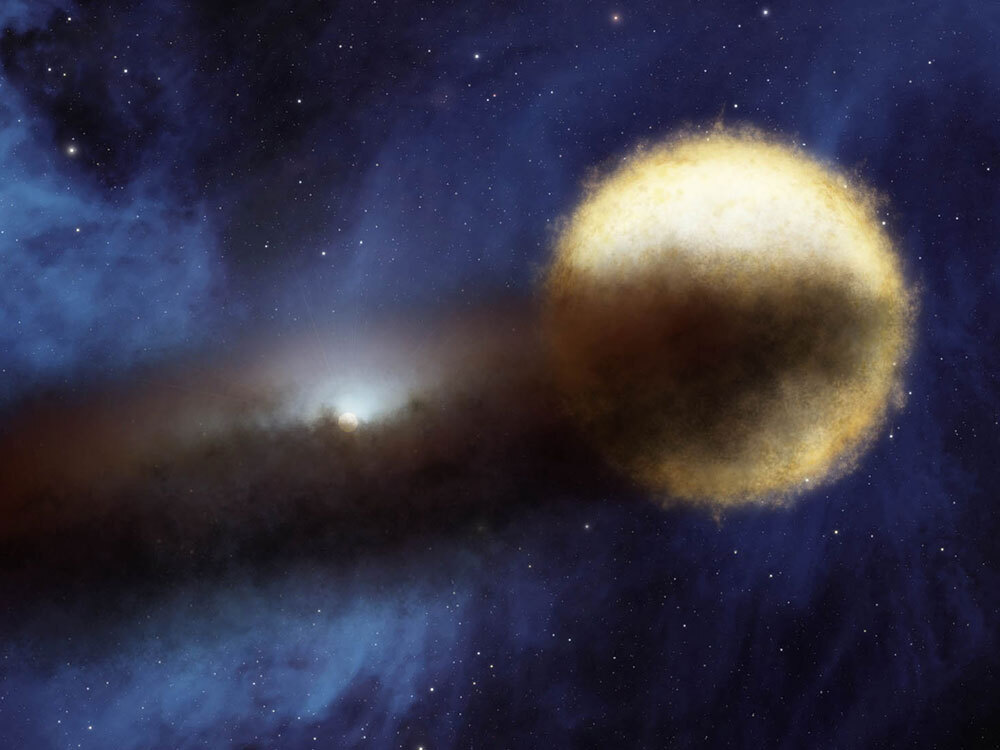 An artist's conception of Epsilon Aurigae and its dusty companion.

Epsilon Aurigae is one of the few stars that you can see with your own eyes, even in the washed out, big-city sky. It's big and very bright — except when it isn't. Sometimes, it's just not there.

Epsilon Aurigae is what's known as an eclipsing star. Every 27 years or so, it dims dramatically. In fact, you would have a hard time finding Epsilon Aurigae right now, because the star began dimming last August — and it won't be fully visible again for more than a year. That's one of the longest eclipses known to man.

Astronomers have been puzzling over these drawn-out eclipses ever since they were first recorded early in the 19th century. Now, using data from NASA's Spitzer Space Telescope, they've come up with a model that sheds new light on this 200-year-old mystery.

Don Hoard led the researchers at the California Institute of Technology, who looked at all the new data. He tells NPR's Guy Raz that Epsilon Aurigae is actually two stars spinning around each other.

"About two eclipses ago — so in the mid-1950s, early 1960s — astronomers started to develop a picture that there must be something in this system other than just two stars orbiting each other and eclipsing each other," Hoard says.

"The idea was formed that there's probably a disc formed of gas and dust that surrounds one of the stars, and the reason the eclipse lasts so long is because this disc is passing in front of the other star — the brighter star in the system — and it just takes a long time to go past."

By the time of the last eclipse, in the early 1980s, Hoard says astronomers had come up with two competing models of the Epsilon Aurigae system. Everyone agreed that there were two stars, and the dimmer, smaller star was surrounded by an obscuring cloud. But no one could figure out the nature of the larger star — the one we actually see in the sky at night.

One model described it as a supergiant star, 20 times the mass of our sun, the kind of star that eventually becomes a supernova. "And the other theory is that the eclipsed star, this big bright one, was essentially a dying star, something with much lower mass, about two times the size of our sun, and a star that's on its way out the door," says Hoard.

"Initially," Hoard says, "I and my collaborators all went into this thinking that the massive star model was probably the right one, because it's the least unusual model." But as they began to compare the new data with the massive star model, Hoard and his colleagues realized they just couldn't make it all match up.

"We kept running into problems. The model kept having to get more and more complicated. And so we kind of stopped doing that and looked at the competing theory. And when we start from there, everything just falls into place."

Hoard says the new models can't explain every little thing about Epsilon Aurigae, so to fill in the gaps, researchers are recruiting amateur astronomers all across the country to keep an eye on the star as it goes through its eclipse. The effort is called the Citizen Sky Project.

"Whatever information we can get will help us untangle the details of everything that's going on in the system," he says. "We have a big picture now, but we need to fill in the details."