Accessibility links
Even In Recession, Dog Walkers' Hands Are Full Looking for a job with no dress code, no cubicle and no office politics? One that, despite a tough economy, still has a lot of pup — uh, pep? The clientele can be a handful, but it's nothing a few treats and a long walk can't satisfy. 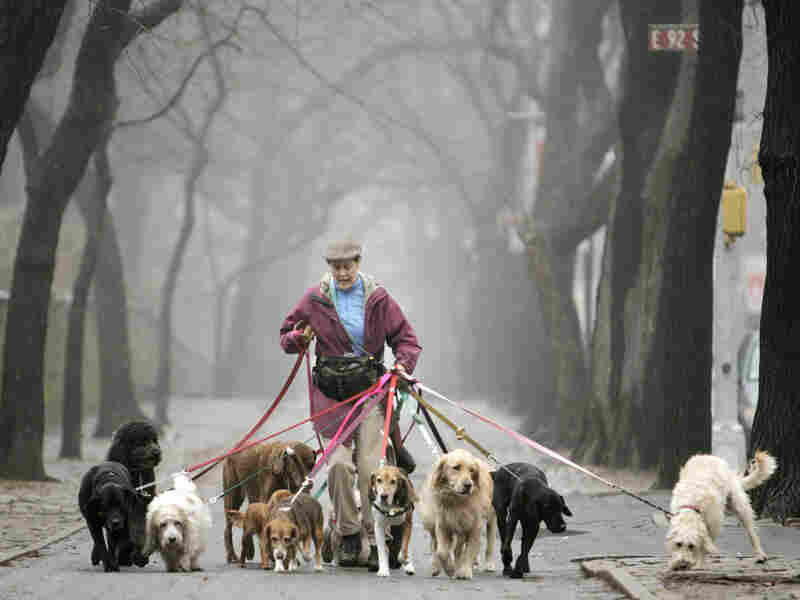 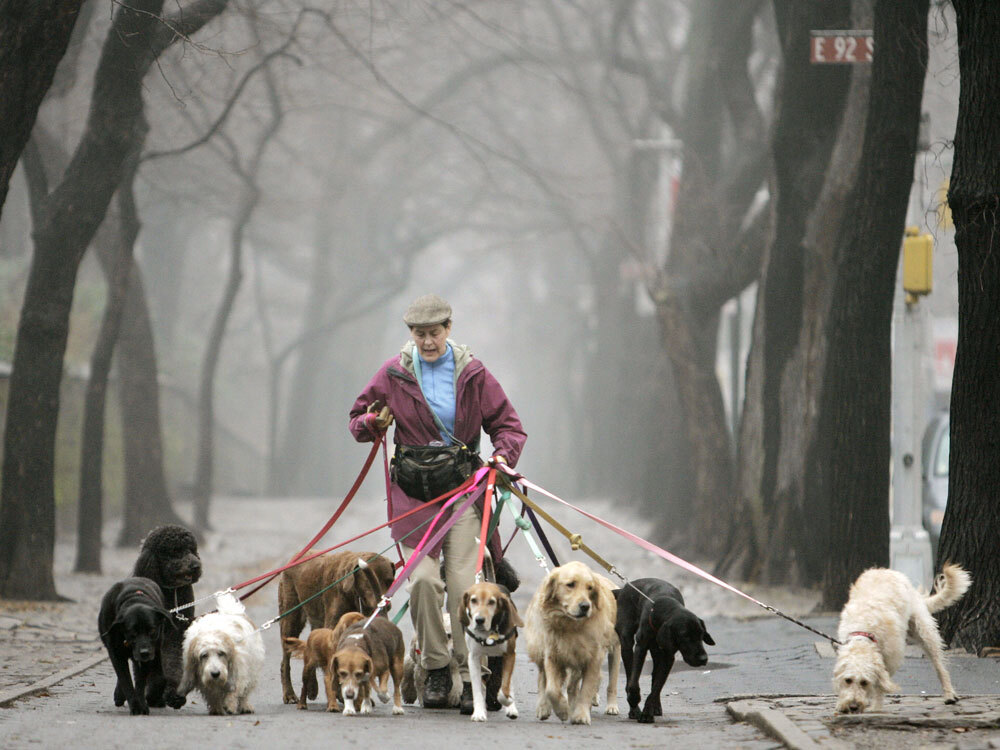 Looking for a job with no dress code, no cubicle and no office politics? One that, despite a tough economy, still has a lot of pup — uh, pep? The clientele can be a handful, but it's nothing a few treats and a long walk can't satisfy.

It's 10 a.m. in downtown New York and Casey Butcher is ready for work, but he's forgotten his paper. A lot of New Yorkers start the day with the morning paper. For Butcher, though, the newspaper serves a whole different purpose.

He's in the dog-walking business, and his first client of the day is a French bulldog puppy named Mochi who is about to take care of his own business.

"A lot of dog walkers invest in the blue poop bags, but I try to use an AM New York when I can," Butcher says. "I'm a little aware of my carbon footprint — I can go through, like, 20 bags a day."

Butcher works for a company called Club Pet NYC. It's not the most glamorous way start to a day, but even in this economy, poop pays. How much does it pay? That can be a little controversial.

An article in a 2004 issue of the New York Daily News asked people how much they made. A dog walker named Sammy Swale reported about $50,000, prompting some dismayed online responses such as, "I went to grad school for five years for a Ph.D. and I still make less than the dog walker!" Another reader replied, "The dog walker is lying, we make much more than that!"

Butcher agrees, although he won't say how much he makes. "I have a friend who's making $100,000, and that's with the company taking half. So he brings in about $200,000 a year just walking dogs." That would be a pretty good income even with Manhattan's high cost of living.

But not just anyone is cut out for this line of work. According to the walkers, it's a lot harder than it looks. First, there's the physical toll. Sherman Ewing, the guy who started Club Pet NYC, says his foot grew a size and a half in his first year from walking about 10 miles a day.

Then there are the logistics. Like the keys to 200 apartments.

"What is amazing is I can tell if any are missing just from the sheer weight of it," says Eric Hahn, who has worked for Ewing for the past seven years and considers himself somewhat of an expert walker.

Even so, walking five dogs at a combined weight of 350 pounds can be a little tricky.

"There is a method. People see you with a bunch of dogs and they think it's just random," Hahn says. He explains his system this way: "Whoever is full and has not been emptied yet is on the outside of you — it's a matter of rotation. I need to keep track of who's empty and full because if a dog's about to go and you go into a lobby ... ."

But what makes dog walking truly challenging is that you have to be good with both dogs and people.

"I have people where their kids call me Uncle Eric," Hahn says. "I've had dinner with my clients. It's not like I'm the help, necessarily; it's more like [an] extended member of the family."

The people at Club Pet NYC won't call dog-walking recession-proof. But it certainly will never require a government bailout or a stimulus package. Unlike the banking industry, dog walkers can always count on a high rate of deposit.