Accessibility links
Matt Groening, Grabbing for Laughs in the Darkness Simpsons creator is bringing America's favorite dysfunctional family to the multiplex. Why does the show still work? "People really, really resonate to the idea of darker emotions in something that is considered a very light medium."

Listen
Matt Groening, Grabbing for Laughs in the Darkness 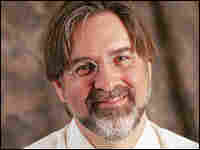 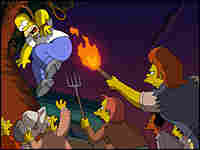 The Simpsons flee a mob of angry Springfield citizens after Homer pollutes the town's lake ...

... and the road to redemption leads Homer through more than a few trials. Twentieth Century Fox hide caption

... and the road to redemption leads Homer through more than a few trials.

'Watching All That TV Was Research'

The cartoonist Matt Groening likes to say he always knew how he'd spend his career.

"I was a hopeless cartoonist who couldn't quite draw well enough," he says. "But I knew I was doomed — that I was going to be drawing the rest of my life, no matter what I was doing to pay the rent."

Groening may have known he would always draw, but he couldn't have realized that he would pay so much rent with his most famous characters — The Simpsons. The members of that dysfunctional family have been on television since the 1980s, and they appear this weekend in a movie that plays like a long episode of the TV show — crude, fast-moving and topical.

It's entirely within normal Simpsons behavior that Homer, the family patriarch, pollutes the local lake with pig manure, causes an environmental catastrophe, and finds a lynch mob at his door. And somewhere in the absurdity is a long-running commentary on American family life.

If you look at the American family of Homer Simpson's creator, you discover this:

The cartoonist named his own son Homer.

And though he says the Simpsons are not directly modeled on real people, maybe those common names begin to offer an answer to this question: "How do you stay interested in a balding, overweight father with a crayon stuck up his nose who wants the number for 911?"

It's no secret that early on, Groening drew inspiration from his childhood. But he has also learned a thing or two from his own kids.

"The conundrum that I face on a daily basis is that I have two sons who've grown up watching The Simpsons, so they know exactly what buttons to push," Groening says. "They know how Bart irritates Homer, and they use these lines against me."

And the blows can be pretty low. Groening's younger son, Abe, likes to tell him that The Simpsons is over, the cartoonist says — that Family Guy is the hot show now.

"This is how he puts it," Groening says, channeling Abe's voice: "'I wish Seth McFarlane was my dad.'"

The Simpsons certainly isn't put off by lowbrow humor — witness that pond full of pig poop — but "there are certain kinds of jokes that we don't do on the show," Groening says. "We could, but they're easy."

Which is why, for example, The Simpsons has fun with Ned Flanders, but not because of his religious beliefs.

"The idea of making fun of the uptight Christian neighbor would be too easy," Groening says.

Like the similarly iconic Peanuts comic, Groening believes, The Simpsons keeps audiences interested because while it's simple on the surface, it often grapples with genuinely complicated issues.

"I think people really, really resonate to the idea of darker emotions in something that is considered a very light medium," Groening says. "I'm not comparing The Simpsons to Peanuts in any other way, except to say that we are also very simply drawn, and we deal with darker emotions.

"With Charlie Brown it was about loneliness and isolation. ... Half the strip was about who wasn't there. The parents were never in the picture. The Simpsons is about alienation, and the ambivalence of living with a family who you love, but who drive you completely crazy." 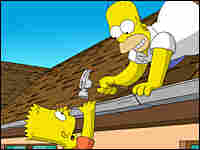 Homer, Bart and the rest of the Simpsons get into scrapes minor ... Twentieth Century Fox hide caption 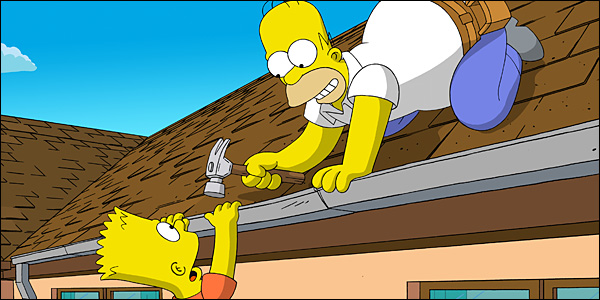 Homer, Bart and the rest of the Simpsons get into scrapes minor ... 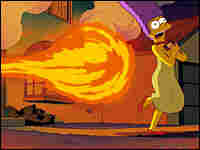 ... and major in The Simpsons Movie, which finds the town of Springfield turning on them en masses after Homer causes an ecological crisis. Twentieth Century Fox hide caption

... and major in The Simpsons Movie, which finds the town of Springfield turning on them en masses after Homer causes an ecological crisis.

The Simpsons Movie is longer, more plot-driven, and has more showy animation than an average episode, but it rarely captures the show's magic — the lunatic free-associations and madcap highs. Like the SpongeBob SquarePants movie, it loses something when it's padded and ironed out to conform to a standard Hollywood story template.

I'm frankly more of a South Park than a Simpsons guy — and yet the scatalogical savagery of South Park would hardly have been possible without The Simpsons. The show was a freak TV milestone, its airing the upshot, almost two decades ago, of the fledgling Fox Network's attempt to differentiate itself from the Big Three. Matt Groening, James L. Brooks, and a writing team that boasted a lot of Harvard Lampoon alumni not only changed the way we saw prime-time cartoons, they changed our notion of TV sitcoms. It turns out you can cram a TV show with TV parodies end to end and still find time for a plot. You can even sass Fox and Republican talking points on Rupert Murdoch's dime.

The Simpsons Movie is rooted in the environmental crisis — a fashionable subject now, but one this show has always been in front on. One of its earliest and most memorable images was of a three-eyed fish from a polluted lake being served up to Homer Simpson's boss, the rapacious captain of industry Mr. Burns, and there's a variation of the same gag here.

But Burns isn't the movie's chief polluter. It's Homer who blithely dumps a silo of pig manure into an endangered lake, and whose selfishness has epic consequences. Somehow he brings about the quarantining and imminent nuking of his hometown, Springfield. And when the truth comes out, the whole town converges on him — and Marge, and Bart, and Lisa and baby Maggie.

The family escapes from the mob and heads for Alaska — where, Homer says, you can't be too fat or too drunk — where tensions escalate. His son Bart has already disowned him, preferring the pious ministrations of their next-door neighbor, Flanders. Even Homer's loyal wife is on the verge of giving him up for his selfishness.

It's too bad that, unlike other cartoon protagonists, Homer has always bored me silly. South Park's voracious Cartman is like a character out of a Voltaire play — outsized, with sleazeball stature. Hank Hill of King of the Hill is a befuddled Everyman who is somehow both smaller and larger than life. SpongeBob SquarePants is an eternal optimist of transcendent obliviousness.

But Homer remains a boob, a thickie, a foil for the appalled Bart, the socially conscious Lisa and the chiding but devoted Marge. The dumber Homer is, the more the series — and now the movie — comes down to gags and pop-culture parodies: jabs at TV, suburban cluelessness, political chicanery and the heartlessness of big business and show business.

The gags in the movie are hit and miss. I liked the Tom Hanks cameo and some Road Runner-esque slapstick. But the writers get surprisingly little mileage out of President Arnold Schwarzenegger and his EPA director, Bob Cargill, a blandly resourceful totalitarian lunatic — although the latter is voiced with just the right degree of smugness by someone whose credit reads "A. Brooks," and who sounds like the dad in Finding Nemo.

One joke, though, is so brilliant it made me gasp. When what looks like a huge saucer from space hovers over Springfield, the people in a church run screaming into the bar next door while, at practically the same instant, the people in the bar run screaming into the church. You could write a whole sociology dissertation on that five-second gag. That's The Simpsons at its most glorious and here, alas, all too fleeting.