Accessibility links
CQ: Obama's Winning Streak On Hill Unprecedented In his first year in office, President Obama did better even than legendary arm-twister Lyndon Johnson in winning congressional votes on issues where he took a position, a Congressional Quarterly study finds. That was while Obama tackled two wars, an economic crisis and battles over health care. 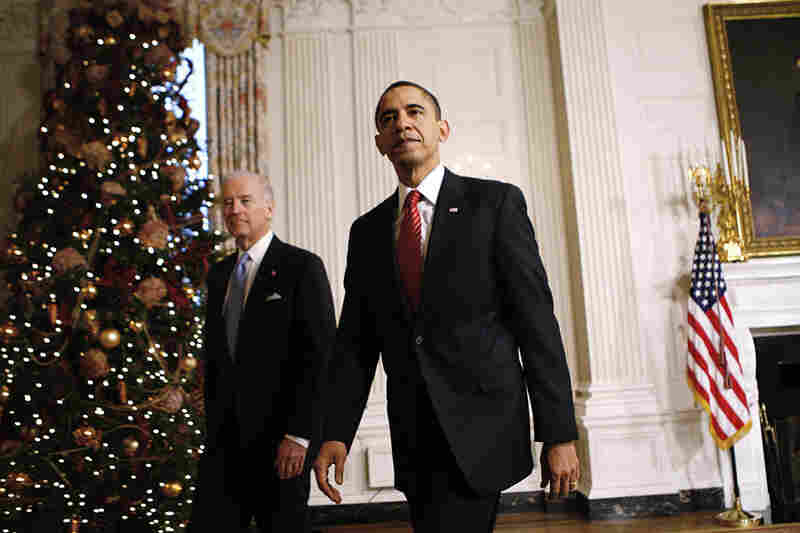 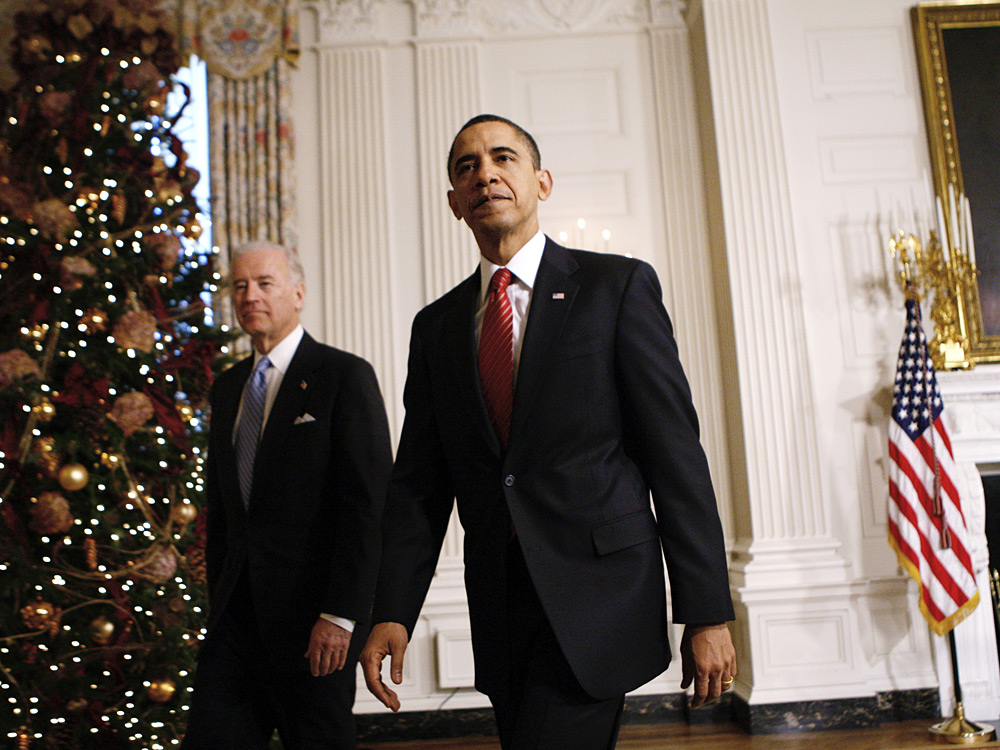 President Obama and Vice President Biden leave the State Dining Room of the White House on Dec. 24, 2009, after Obama spoke about the Senate passing the health care reform bill.

In his first year in office, President Obama did better even than legendary arm-twister Lyndon Johnson in winning congressional votes on issues where he took a position, a Congressional Quarterly study finds.

The new CQ study gives Obama a higher mark than any other president since it began scoring presidential success rates in Congress more than five decades ago. And that was in a year where Obama tackled how to deal with Afghanistan, Iraq, an expanding terrorist threat, the economic crisis and battles over health care.

Obama has been no different from his predecessors in that he's always ready to send a firm message to the other end of Pennsylvania Avenue as he "urges members of Congress" to come together and act. All presidents demand specific action by Congress — or at least they ask for it. But when you look at the votes of 2009 in which Obama made his preference clear, his success rate was unprecedented, according to John Cranford of Congressional Quarterly.

"His success was 96.7 percent on all the votes where we said he had a clear position in both the House and the Senate. That's an extraordinary number," Cranford says.

The previous high scores were held by Lyndon Johnson in 1965, with 93 percent, and Dwight Eisenhower, who scored 89 percent in 1953. Cranford notes that George W. Bush's score hit the high 80s in 2001, the year of the terrorist attacks on the World Trade Center. But Obama surpassed them all, Cranford says.

On roll-call votes where the president had a clear position, what percentage of the time did Congress support the president's position?

He Picked His Battles

A major reason for Obama's record high score this year: Democrats took away a significant number of seats from Republicans in the 2006 and 2008 elections, resulting in big majorities in the House and Senate for the president's party.

But Sarah Binder, a congressional analyst at the Brookings Institution, says there's another key reason he scored so well. She says he only took an official position on issues that were really important to him — those that he knew he had a very good chance of winning. He picked his battles carefully.

"He can do that because he's been in the Senate, his staff has been in the House and he understands the process here. They are consummate congressional insiders in understanding how this works," Binder says.

Binder says the intense partisanship in Congress these days, a condition underlined in a separate CQ vote study, meant that Democrats were more likely to rally around the president each and every time he asked them to — if only to deny the Republicans a victory.

The Downside Of Compromise

But another contributing factor here may prove more controversial for the president and his party. That's his willingness to negotiate and to compromise. For example, as much as the president said he wanted a public option as part of a health care bill, the final legislation won't have one. But that's not counted as a loss for the president under the scoring of this survey.

Such compromises have brought strong criticism from the liberal wing of the president's own party. But White House Chief of Staff Rahm Emanuel, a veteran of Congress, says compromise has a long, long history — one that makes it a great part of the democratic process.

"The question is: Are you compromising a set of principles, or are you making adjustment in strategies, roads, that can still achieve the same objectives? And not every compromise is the same in weight," Emanuel says.

On health care, for example, the White House insists that compromise was the only way to get the necessary 60 votes in the U.S. Senate.

Emanuel also cautions that having the president score so high on votes where he took a stand is not at all the same thing as having the White House get everything it wanted.

It will get tougher for the president in Congress this year, as more and more members of Congress look to their own re-election. Many are running in districts that voted for Republican John McCain in the 2008 presidential election. And even other districts are far from safe for the Democratic Party.