Accessibility links
Gazans Fear New Barrier; Egyptians Hope For Relief Egypt is building a new underground barrier aimed at blocking hundreds of smuggling tunnels under its border with the Gaza Strip. Palestinians fear what the barrier could mean for Gaza, while Egyptians are angry about the new criminal class the tunnels have spawned. 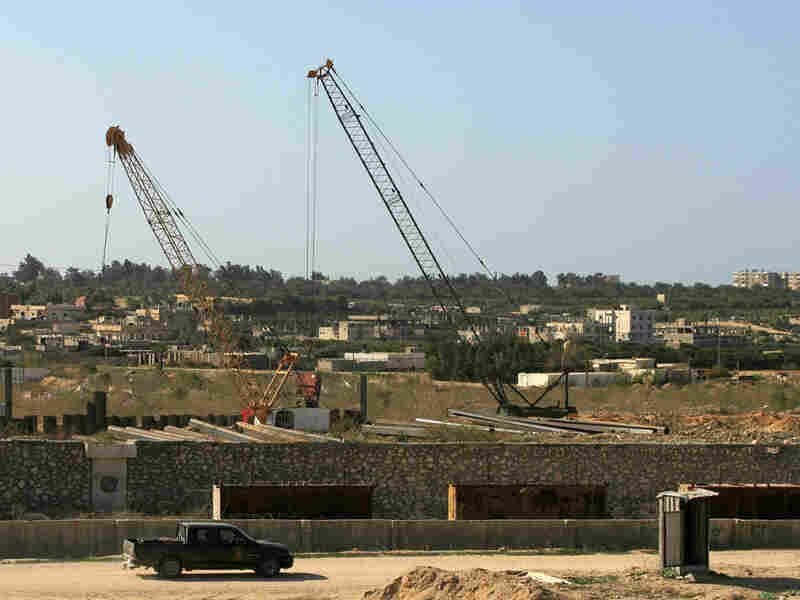 On the Egyptian side of the Egypt-Gaza border town of Rafah, construction is under way of a barrier meant to stop the smuggling of goods and weapons to Gaza via underground tunnels. Israel has blockaded all of Gaza's other borders. Eyad Baba/AP hide caption 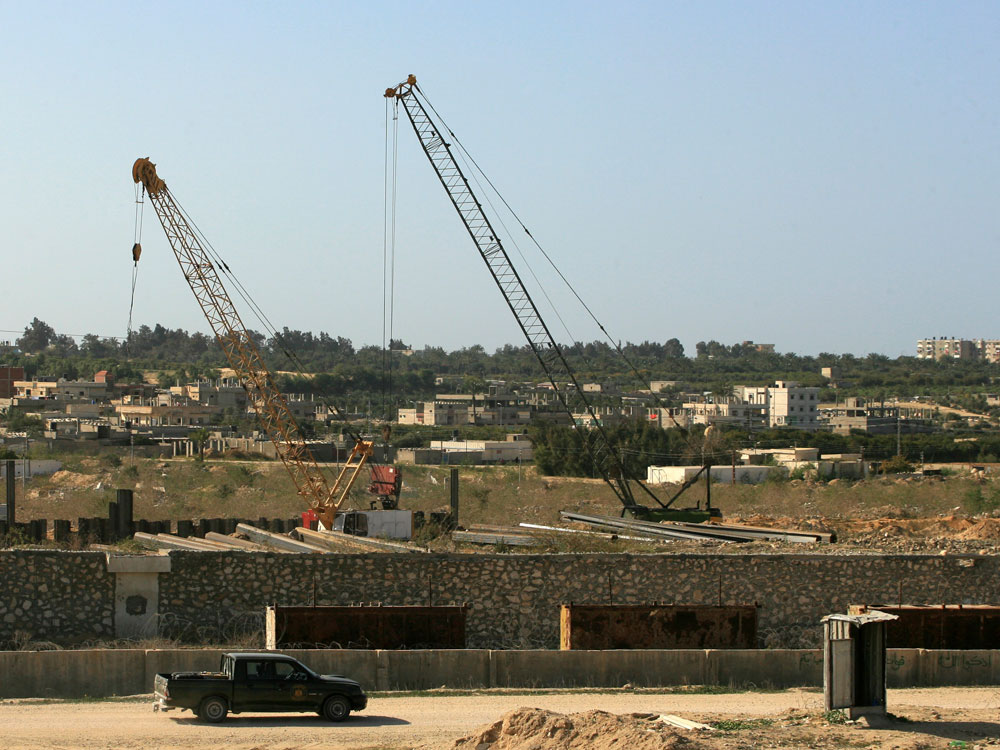 On the Egyptian side of the Egypt-Gaza border town of Rafah, construction is under way of a barrier meant to stop the smuggling of goods and weapons to Gaza via underground tunnels. Israel has blockaded all of Gaza's other borders.

Violent protests erupted in the southern Gaza Strip last week over Egypt's construction of a new underground barrier aimed at blocking hundreds of smuggling tunnels that snake under the border. Since Hamas took control of Gaza in 2007, smuggling has boomed, and Israel and the U.S. have pressured Egypt to stop weapons from flowing to Hamas.

Palestinians in the Egypt-Gaza border area fear what the barrier could mean for Gaza. But Egyptians are angry about the new criminal class the tunnels have spawned in North Sinai.

On a rooftop in Egypt, less than 100 yards from the crossing with Gaza, Egyptian children playing in their yards are visible on one side; on the other are scores of white tents, which cover the entrances to smuggling tunnels. Also on the Egyptian side of the border, large cranes work at building the underground barrier, Egypt's latest defense against the tunnels.

The police have warned and even intimidated residents on the Egyptian side of Rafah, the border town, not to speak to foreigners. But NPR did manage to talk to a few.

"They're destroying the Palestinians. This way, they will die very slowly," says 30-year-old Mohammed, wearing dark glasses and a red nylon jacket. He is accustomed to the brazen openness of the large-scale smuggling operations going on just across the border, which is the first thing that leaps out at first-time visitors to the rooftop.

Another young man hands an NPR translator a cell phone and points across the border to the sea of white tents. A man is holding a phone to his ear and waving. Suddenly, the translator is having a conversation with a Palestinian smuggler, who gives his name as Abu Khaled and confirms that he is standing in front of a tunnel.

"We're going to have a humanitarian crisis over here if they build that wall," says Abu Khaled.

"Our only outlet is the tunnels, and if the border crossing is closed and the tunnels are closed, too, people will eat each other," he says. "It will be an absolute disaster."

As recently as just a few years ago, it would have been safe to assume that Abu Khaled was probably working for either Palestinian President Mahmoud Abbas' Fatah movement or for the Islamist Hamas, because there were far fewer tunnels then and all were controlled by the Palestinian factions.

But since Hamas drove Fatah from Gaza, the tunnel business has been thrown wide open, with an estimated 400 dug to date. The tunnels are important because of the strict blockade imposed by Israel, which controls all of Gaza's other borders.

On the Egyptian side of Rafah, smuggling is a booming business that has brought cars, motorcycles, fancy new homes and a wealthy and well-armed criminal class that residents say is beyond the reach of the police and is tearing apart the traditional tribal way of life in northern and central Sinai. 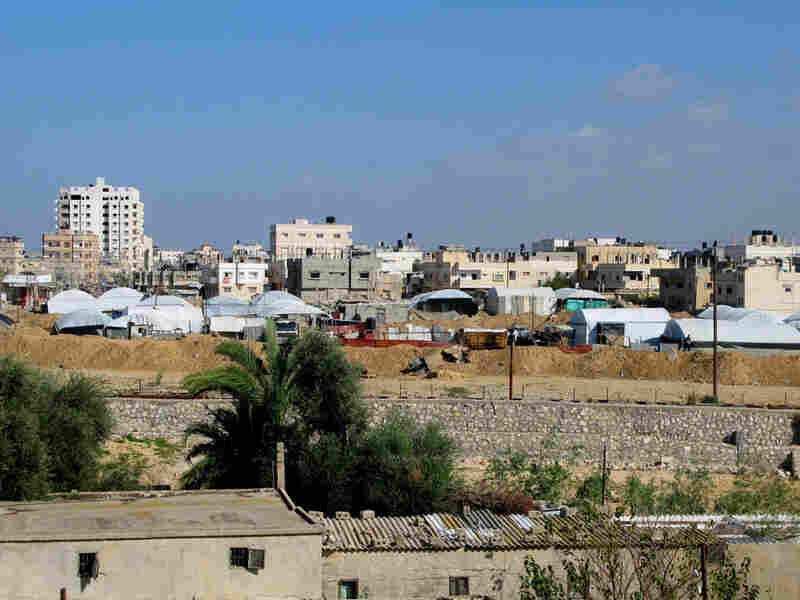 On the Palestinian side of Rafah, a sea of tents covers the entrances to smuggling tunnels. Peter Kenyon/NPR hide caption 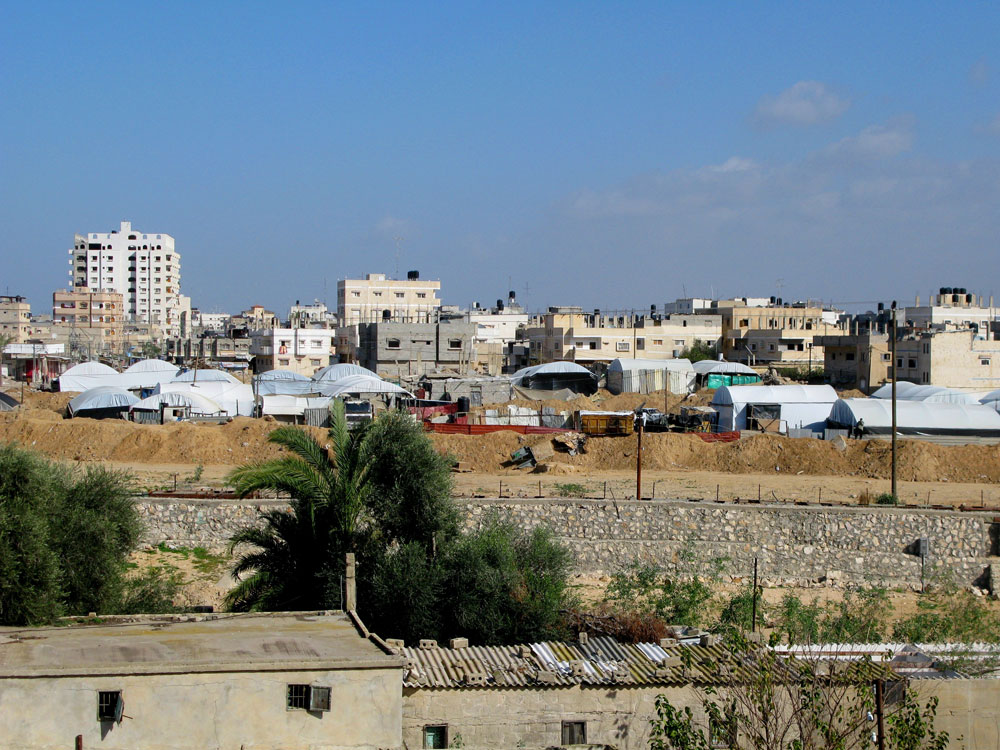 On the Palestinian side of Rafah, a sea of tents covers the entrances to smuggling tunnels.

Some 25 miles south of the border, the port city of El-Arish no longer bears much resemblance to the sleepy seaside resort it was in the 1980s, when Egyptians would flock there for vacations. These days, the city is in the grips of what residents call an unprecedented crime wave: Women aren't out on the streets after 9 p.m.; taxi drivers won't turn off the main roads; residents carry guns as protection against armed robbers.

When Arish resident Abdel Karim Shorbagi was gunned down Jan. 3, the city erupted in protest. When security officials delayed handing over Shorbagi's body, a mob stormed the hospital and took it to a funeral attended by an estimated 10,000 people. It was an unusual display of popular fury that crossed tribal and clan lines, and Arish's main square seethed well into the night.

Thousands of people alternated between yelling and throwing rocks at security men and running away in panic, causing periodic stampedes. Most shops were locked and shuttered, and left-wing activists staged a sit-in protest demanding immediate action against what residents called the complete failure of the police to halt the growing lawlessness in North Sinai.

Mustafa Singer, an Arish native who reports for the independent Al-Shorouk newspaper, has spent years piecing together the story of how the quiet port city was transformed into a nearly lawless outpost. He says it all comes back to the tunnels, as well as the above-ground smuggling farther west that goes on between Egypt and Israeli criminal gangs.

Locals call them the "nouveau riche" — criminals without ties to the local tribal power structure, with better and more powerful weapons than the police. Singer says Arishis want the current security leaders sacked. 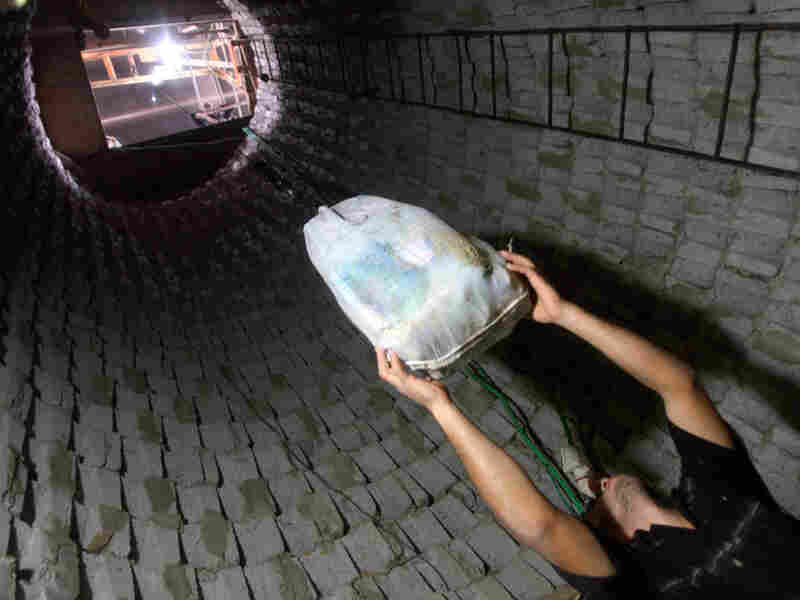 A Palestinian worker releases a bag of goods as others haul it up from a smuggling tunnel between Egypt and Rafah in southern Gaza Strip, Dec. 30, 2009. Eyad Baba/AP hide caption 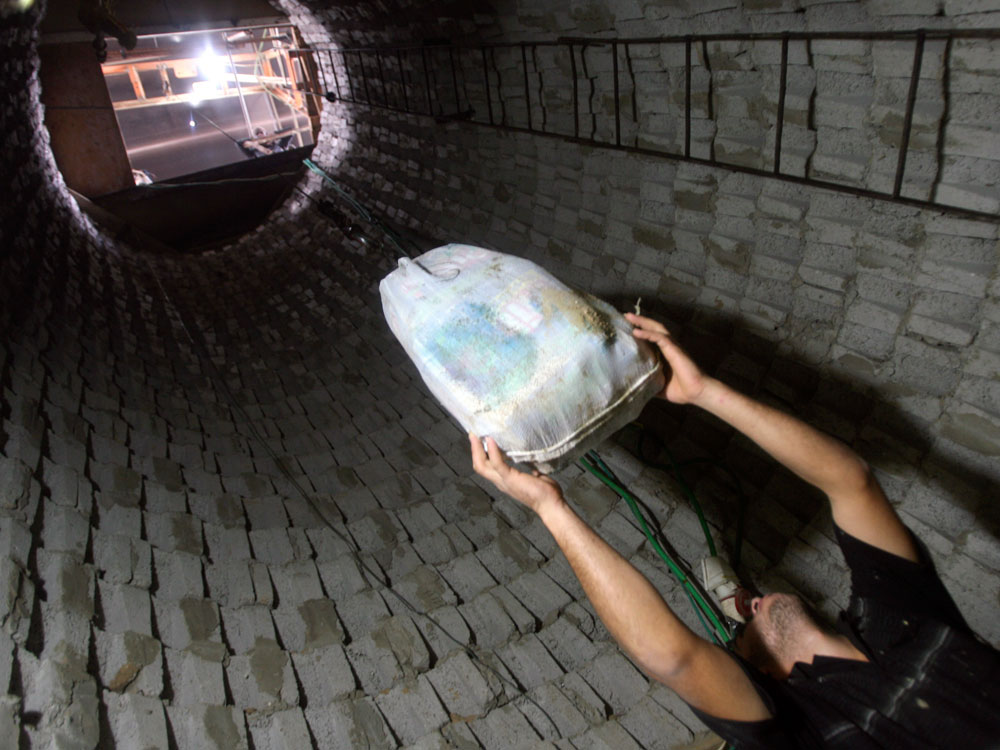 A Palestinian worker releases a bag of goods as others haul it up from a smuggling tunnel between Egypt and Rafah in southern Gaza Strip, Dec. 30, 2009.

"They failed to arrest even one person after more than 2,000 cases of motorcycle theft. That's besides the murders and the armed robberies on commercial entities. So it's a complete security failure," he says.

Singer's scenario was corroborated by several Arish residents, who all chose not to speak on the record for fear of being targeted by the criminals. According to this scenario, certain Bedouin families from the small villages around Arish have made large fortunes as the smuggling escalated.

Along the way, security officials have insinuated themselves into the process, and not just by taking bribes to permit the tunnels to operate. Among other things, Singer says, they mediate family and business disputes between smugglers — for a fee.

The unintended consequence the government didn't see coming, he adds, was that the well-armed criminals wouldn't stop with smuggling, but would turn on non-Bedouin tribes such as the people of Arish, stealing and killing seemingly at will, with no fear of the law.

"The leaders of the security forces are corrupt. They are very involved in the smuggling business, so they cannot arrest them; they are partners in crime. Citizens have now been carrying weapons to protect themselves — in the absence of any protection from the state — and there's a new culture of violence," Singer says.

Egyptian security officials, who refused to give their names for fear of retribution by their superiors, denied systematic corruption or routine protection of known criminals. But they acknowledged that maintaining law and order in the border region is extremely difficult.

The Egyptian barrier on the Gaza border will take months to complete. Egypt has not described it precisely, but analysts say it may turn out to be a network of defenses, both below and aboveground, including walls, fences, motion detectors and other measures.

But already, Hamas leaders are warning what could happen if Egypt does seal Gaza in. In Gaza City, Mayor Issa Nashar said the Gaza Strip would explode into violence, and he suggested that Egypt would not be spared.

"Certainly, the more the pressure increases, the closer we get to the explosion. Our main enemy is the Zionist enemy, but all those who contribute to besiege us are standing with the enemy. Therefore, the explosion of the Palestinian people may be in any direction," Nashar said.

On the Egyptian side of the border, the smugglers are nervous about the barrier and seem to be accelerating their efforts while it remains incomplete. But the residents of North Sinai wonder when, if ever, a sense of law and order will be restored to their towns.