Accessibility links
Study Shows Blacks Optimistic In Obama Era Optimism among black Americans has surged more in the past two years than at any time in the past quarter century, according to a new survey from the Pew Research Center. African-Americans remain upbeat about economic and social progress, despite the deep recession. 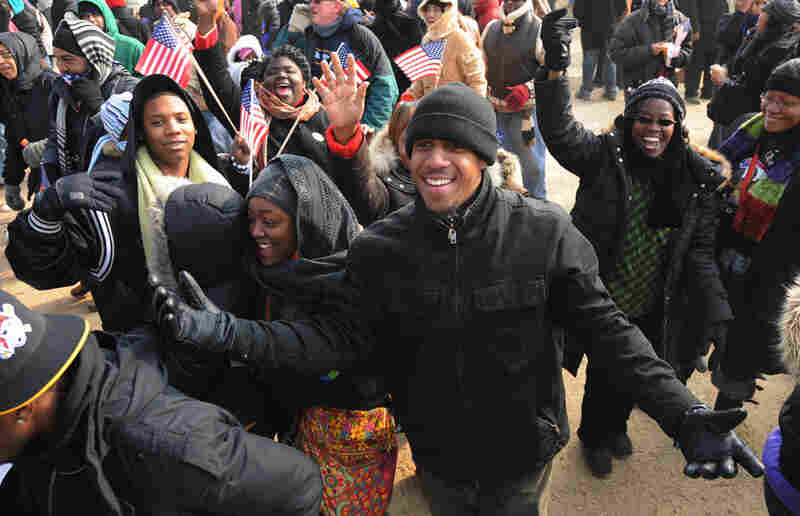 People celebrate at the Washington Monument as Barack Obama takes the oath of office during his inauguration Jan. 20, 2009, in Washington, D.C. Optimism among black Americans soared after his election as the nation's first black president — despite dire economic conditions. Mark Ralston/AFP/Getty Images hide caption 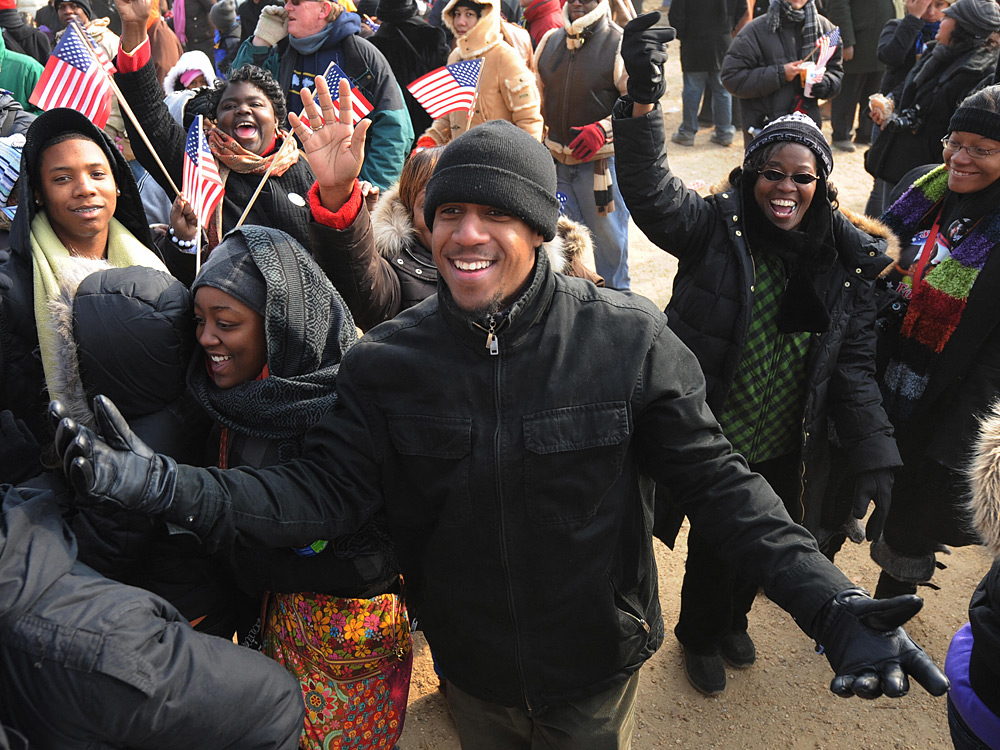 People celebrate at the Washington Monument as Barack Obama takes the oath of office during his inauguration Jan. 20, 2009, in Washington, D.C. Optimism among black Americans soared after his election as the nation's first black president — despite dire economic conditions.

Optimism among black Americans soared after the 2008 election of Barack Obama as the nation's first black president — despite dire economic conditions that have hit the community hard, according to a new national survey released Tuesday by the Pew Research Center.

The survey, conducted from Oct. 28 to Nov. 30, also found that Americans, by and large, do not view Obama through the prism of race: Just 13 percent of whites said they believe that the president is paying too much attention to concerns of blacks.

"Whatever Obama's problems with the public may be," says Andrew Kohut, the Pew Research Center's president, "you don't get a sense that they are being driven by race."

The survey, conducted in association with National Public Radio, showed that though Obama's popularity has dropped since his inauguration a year ago, he remains popular with 65 percent of those surveyed by Pew.

Fifty-four percent of blacks surveyed said they believe that Obama has improved race relations in America, compared with 32 percent of whites.

A Sharp Spike In Blacks' Sense Of Progress

Percent of blacks who say blacks are better/worse off now than five years ago.

Pew's findings, based on telephone surveys of 2,884 adult Americans, including 812 non-Hispanic blacks, revealed an across-the-board hopefulness among black Americans — from those who say they are better off as a group than they were five years ago to those who anticipate an even better future.

The surge in the assessment among blacks of their forward progress was more dramatic over the past two years, Pew found, than at any time in the past 25 years.

The last time blacks expressed similar confidence was in 1983, when the Rev. Jesse Jackson appeared on the cover of Time magazine with this headline: "Seeking Votes And Clout: A New Black Drive For Political Power." Jackson ran for president the following year, and again in 1988.

"The current optimism is based upon an improved sense of the black condition as a consequence of President Obama's election," Kohut says. "They have a more positive outlook on life in the United States based on the barrier-breaking election."

One surprise among the survey results may be that a majority of black Americans say they believe that the standard-of-living gap between whites and blacks has narrowed, even though statistically that's not true. Economic measures have shown that black households, after steady income gains in previous decades, lost ground to whites after 2000.

Walter Earl Fluker, executive director of the Leadership Center at Morehouse College in Atlanta, says that the seeming disconnect is not surprising.

The survey results, he says, may reflect a "positive, romantic idea of a post-racial America, even though there may be some other realities to contemplate in Obama's world, which is also our world."

"Certainly every statistical measure we have of black life and culture — from health and education to unemployment — shows that the African-American community has been hit hard," Fluker says.

"But most citizens, black and otherwise, want to be hopeful at this time," he says.

Blacks' View of Why Many Blacks Don't Get Ahead

A large majority of black Americans, however, continue to say that the country needs to take steps to ensure equal rights, while just over a third of white Americans expressed similar sentiments. And survey results showed that blacks are more inclined than whites to see discrimination, such as when dealing with police.

But in a dramatic turnaround from data collected in 1994, a majority of black Americans now say that blacks who fail to get ahead are stymied more by their personal actions than by discrimination.

That shift in perception began years before Obama's election, according to Pew data. It coincided with a national conversation, begun in 2004 by comedian Bill Cosby, about personal responsibility within the black community.

Kohut, however, says it's difficult to pinpoint what prompts changes in perception and attitude, including the shift in attitudes about discrimination.

"This is one of those things that entered the conversation in a very slow way, so it's difficult to say what the genesis is," Kohut says.

Blacks More Upbeat On Many Fronts

Percent of blacks who say...

Blacks include only non-Hispanic blacks.

Black Or White Or Neither?

Pew's expansive survey also found a nation much more accepting of interracial marriage, particularly among its younger citizens. It found that a majority who oppose Obama do not do so because of his race, and that the president is seen as mixed race among a majority of all Americans — but as black among a majority of the black community.

Fifty-five percent of blacks say Obama is black, while 53 percent of whites say the president, son of a black father from Kenya and a white American mother, is of mixed race.

For Fluker, the Pew results reflect just one yardstick of two: The one measuring how far the community has come. The other measures progress the community still needs to make.

"Boy, we've come a long way with Obama in there for a year, and having survived," says Fluker. "But we have far to go. We've got to take both into account."

But not to be ignored are the broad, better feelings among African-Americans over the past two years, Kohut says, and the persistence of optimism even in the toughest of times.