Accessibility links
Study: Neanderthals Wore Jewelry And Makeup Scientists working in Spain say they've found evidence of sophisticated Neanderthal inventions — jewelry and makeup. Ornamentation is viewed as evidence of "symbolic" thinking, a trait most often thought of as belonging only to modern humans. 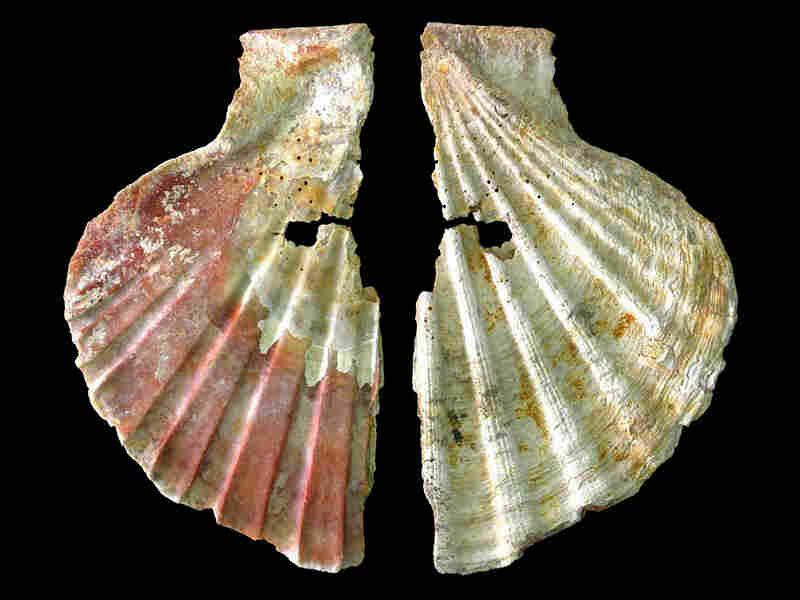 This decorative shell ornament, attributed to Neanderthals, shows signs of being painted with orange pigment. It's one of several examples of ornamentation that researchers have found in Spain, at sites that were used by Neanderthals as far back as 50,000 years ago. Courtesy of Joao Zilhao hide caption 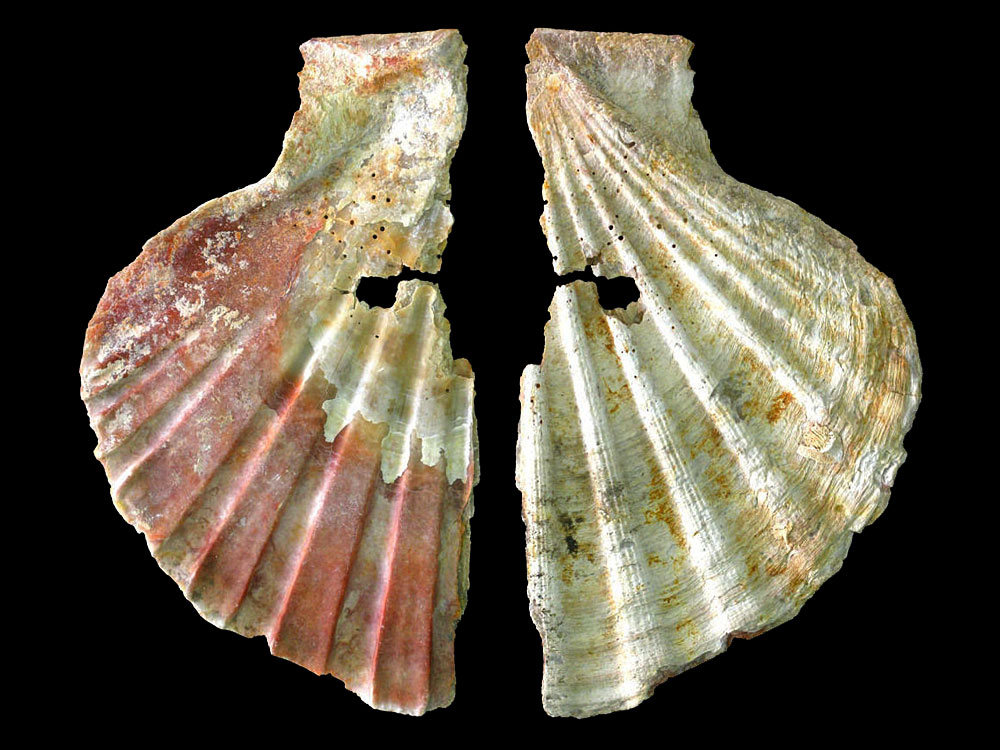 This decorative shell ornament, attributed to Neanderthals, shows signs of being painted with orange pigment. It's one of several examples of ornamentation that researchers have found in Spain, at sites that were used by Neanderthals as far back as 50,000 years ago.

Neanderthals don't get much credit for brainpower. They lived in Europe for hundreds of thousands of years but eventually were replaced by modern humans from Africa, who apparently were smarter.

But life in snowbound caves may not have been so brutish after all. Scientists working in Spain say they've got evidence of some pretty sophisticated Neanderthal inventions — body ornaments and cosmetics.

Neanderthals were our evolutionary cousins, but they'd sure stand out in a modern crowd. With heavy brows and jutting jaws, they were a rough-looking lot.

But archaeologist Joao Zilhao of the University of Bristol in England says he's found evidence at a Spanish excavation that might change that view. He's found shells with holes in them, apparently strung together and worn like beads. And there's something unusual on some of the shells.

"Glitter makeup," he says, "or shimmer makeup ... where you, over a foundation, you add shiny bits of something granular that shines and reflects. When light would shine on you, you'd reflect."

There were also several kinds of pigments, including some that had to be mixed from different ingredients.

Were Neanderthals Jewelers Or Scavengers?

Now, in those days, jewelers didn't engrave "made by Org, Neanderthal" on their handiwork. And scientists have argued that ornaments found at Neanderthal sites were probably made by us, Homo sapiens, the smart ones. Maybe Neanderthals picked them up out of our trash.

But Zilhao doesn't think so, and here's why: Modern humans didn't migrate into Europe until about 40,000 years ago.

"These shells and the associated pigment evidence is 50,000 years old," he points out. "So, I mean, it can only be made by Neanderthals, there's no question about that."

So let's say they did paint those shells. Maybe they looked nicer that way. But to archaeologists, ornaments like shells and body painting aren't just ornaments, they're evidence of "symbolic thinking." Things that represent ideas.

"Something that people wear in order to convey what they are," says Zilhao. "And you only need to do that in a world where you have a complex network of relations, because if you only interact with your family or people you've known all your life, they know who you are, you don't need to use an identity card."

Ornaments show you're part of the in-crowd, or a big shot. Early humans used symbols, and it's considered a hallmark of an intelligent, social species. Zilhao thinks Neanderthals were doing the same.

Anthropologist Alison Brooks at George Washington University says Neanderthals were known to use pigments, but crudely, like crayons. She's surprised by the painted shells from Spain. "OK, Neanderthals went up a notch in my thinking," she says of the research. "This is certainly the oldest and strongest evidence for Neanderthal symbolic behavior beyond just pigment use."

So even though Homo sapiens had developed symbolic thinking before they got to Europe, perhaps Neanderthals were figuring it out for themselves. Brooks suggests that maybe it was the arrival of those modern humans that pushed them into it.

"In some way, modern humans were pushing populations in front of them," she says, "so that Neanderthals in southern Spain were becoming more crowded in some way, so that they were feeling the need to reach out to a larger safety net, if you like, of individuals."

And if you wanted to make friends with another Neanderthal, it was probably best to look your best.