Accessibility links
Veterans React to Report on Care Veterans say recommendations from the presidential commission on veteran's care are long overdue. They're well aware of the agonizing experiences many soldiers have had after returning from combat. But some places already have a solid track record for helping veterans in need.

Veterans say recommendations from the presidential commission on veteran's care are long overdue. They're well aware of the agonizing experiences many soldiers have had after returning from combat. But some places already have a solid track record for helping veterans in need.

DEL BARCO: The choir is just one way the vets work through their traumas. They can also learn to cook, do yoga and take part in a theater group. Navy vet Randy Fielder(ph) lives here with 200 others. He gets free room and board, counseling and job training as he deals with flashbacks from years of combat in Iraq.

RANDY FIELDER: There was explosions all the time. You're always under constant fire. Civilians may come up to you from Baghdad and you think they want to help and they're loaded down with weapons and bombs, you know? So you're always under fire and you're always on the lookout for anything.

DEL BARCO: The 27-year-old says it was hard after he returned from Iraq a year and a half ago. He began doing drugs. His fiance broke off their engagement. His family didn't understand his self-destructive behavior. Like so many vets returning from Iraq and Afghanistan, Fielder suffers from post-traumatic stress disorder.

FIELDER: It's hard for me to sleep at night. Like I'll wake up in cold sweats or I'll have relapsing dreams, just things like that. And then when I got back, I didn't know how to deal with it. So I started to self-medicate myself with drugs and this, that. And finally I found this place that was for veterans and it's a blessing.

DEL BARCO: Fielder says he realizes he's been a lot luckier than others who've come back from war only to deal with bureaucratic red tape and worse. New Directions provides the kind of customized, personalized care being recommended by the new report. Fielder says he hopes government officials keep their promise to take better care of the vets.

FIELDER: I pray to God that they do. I mean, I wouldn't see why not, as long as they got the right support and people pushing it. Anything to help a fellow brother who went to war.

DEL BARCO: Fielder's counselor at New Directions, Dale Adams, is a veteran of Desert Storm. He agrees with the report that PTSD treatment, better disability pay and family support are crucial. And he worries about reservists and National Guard troops returning from Iraq and Afghanistan.

DALE ADAMS: Most of these guys are the ones that are actually doing the frontline fighting today. And they're coming back and they only get two years of medical service from the VA. So if he's injured severely - brain trauma, loss of limb - he may get the best prosthesis in the world, but after two years, he has to maintain it. And a lot of medical insurance coverages won't help.

TONI REINIS: I think there is going to be a train wreck in the next two years after these men and women are not eligible for care any longer.

DEL BARCO: Toni Reinis, the program's executive director, has testified before Congress about the need to provide medical and trauma treatment for all returning veterans.

REINIS: For the rest of that person's life. If we have sent our men and women to war, that impact of war is not something that drifts away. My stepfather was in World War II, and to his dying day the memories were absolutely vivid. 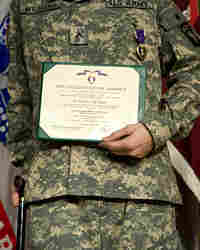 A presidential panel examining medical care for wounded U.S. service members on Wednesday called for changes that would boost benefits for care givers, establish a Web site for medical records and overhaul the way disability pay is awarded.

A 29-page draft report was presented to President Bush, after the Senate on Wednesday addressed some of the issues by passing sweeping legislation to expand brain screenings, reduce red tape and boost military pay.

The commission formally approved the recommendations later in the day.

"Gone will be the days of injured soldiers telling the same information to doctors over and over again," said Shalala, who said the proposals seek to provide more customized, personalized care to injured Iraq war veterans.

She called the report a set of recommendations that could be implemented right away. About six of the 35 proposals require legislation, while the rest call for action primarily by the Pentagon and Department of Veterans Affairs.

Among the recommendations was an indirect rebuke of the VA — a call for Congress to "enable all veterans who have been deployed in Afghanistan and Iraq who need post-traumatic stress disorder care to receive it from the VA."

In the past, the VA had failed to use all the money for mental health that was allotted to it.

"The experiences of these young men and women have highlighted the need for fundamental changes in care management and the disability system," the report read.

"Making the significant improvements we recommend requires a sense of urgency and strong leadership," it said. Bush said his hand-picked investigative panel had interesting suggestions on improving health care for those wounded in battle.

But the White House said not to expect action right away.

The report does not seek to directly criticize or lay blame for shoddy outpatient treatment at Walter Reed Army Medical Center, which resulted in a public outcry for change and creation of the commission. It cited a need to move forward, explaining there was no need to "reiterate" the findings of news reports that uncovered substandard care from the Defense Department and VA.

-- Boost staff and money for Walter Reed until it closes in the coming years. Also, urges Pentagon to work with the VA to create "integrated care teams" of doctors and nurses to see injured troops through their recovery.

-- Restructure the disability pay systems to give the VA more responsibility for awarding benefits.

-- Create a "My eBenefits" Web site — developed jointly by the VA and Pentagon — that would allow service members and doctors to access private medical information as the injured move from facility to facility to receive treatment.

-- Provide better family support, because one-third of injured Iraq war veterans reported that a family member or close friend had to relocate to care for them. It calls for training and counseling for families of service members who require long-term care and improved family leave and insurance benefits for family members.

President Bush created the panel in March to investigate problems in the treatment of wounded veterans following disclosures of roach-infested conditions and shoddy outpatient care at Walter Reed.

The White House event followed the Senate's vote by unanimous consent on legislation that seeks to end inconsistencies in disability pay by providing for a special review of cases in which service members received low ratings of their level of disability. The aim is to determine if they were shortchanged.

The bill also would boost severance pay and provide $50 million for improved diagnosis of veterans with traumatic brain injury or post-traumatic stress disorder. The House was considering similar measures.

"It has been hurry up and wait for the results of this commission report and now the White House is telling our vets to wait even longer," said Sen. Patty Murray (D-WA). "That's why the Senate has moved ahead with our Wounded Warriors Act. The public is waiting, our veterans are waiting."

"It is important for the American public to understand that the Walter Reed fiasco is not over," he said. "Everything is not fixed. The follow-through will be the most important part."

White House press secretary Tony Snow said that Bush would not be acting immediately on any of the recommendations. Rather, he said that the panel's ideas would likely be integrated with other ongoing efforts to improve health care and overall treatment of returning soldiers.