Accessibility links
Nitin Sawhney: In Search Of The 'Undersound' The composer is at the forefront of a movement to capture the sound of the new Britain — a place that's home to a young generation with roots in Africa, Asia and the Middle East. Nitin Sawhney's latest album is called London Undersound. 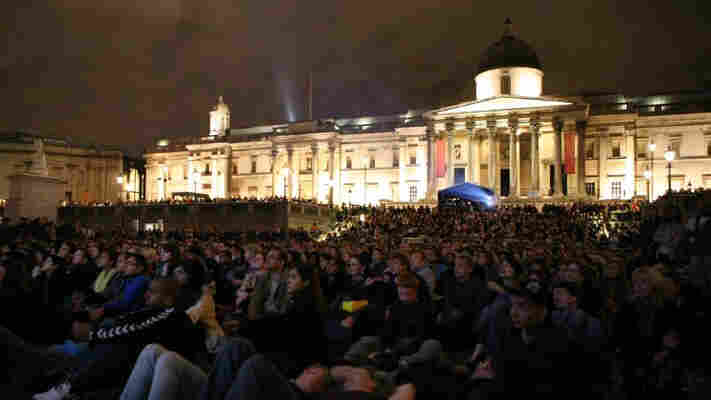 In August 2007, a Trafalgar Square crowd watches a restored print of the 1929 film A Throw of Dice while listening to Nitin Sawhney play its score live with the London Symphony Orchestra. Courtesy of the artist hide caption 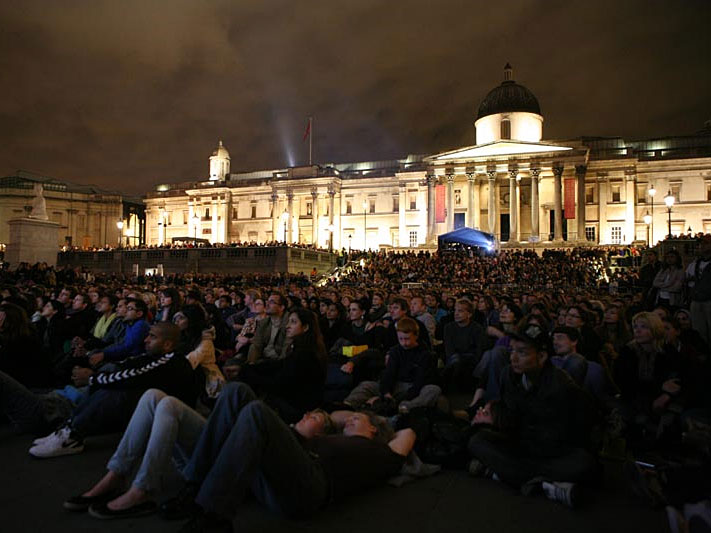 In August 2007, a Trafalgar Square crowd watches a restored print of the 1929 film A Throw of Dice while listening to Nitin Sawhney play its score live with the London Symphony Orchestra. 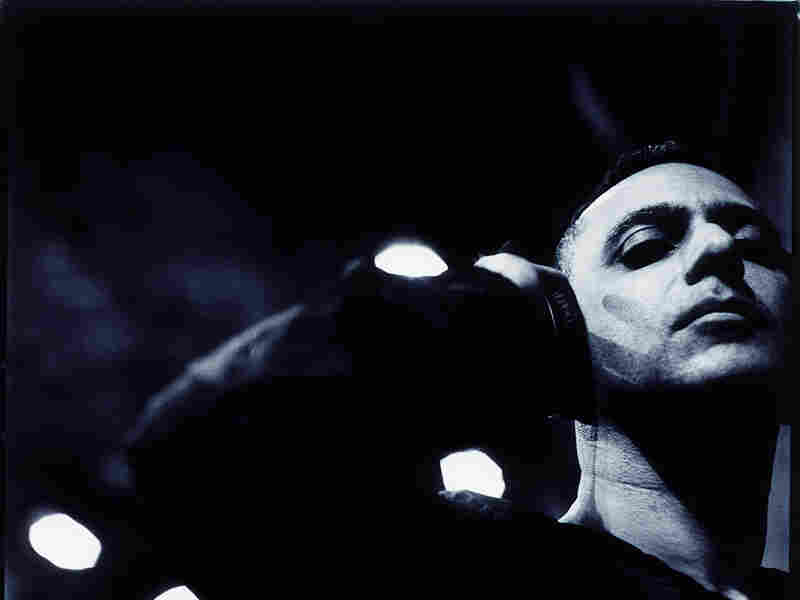 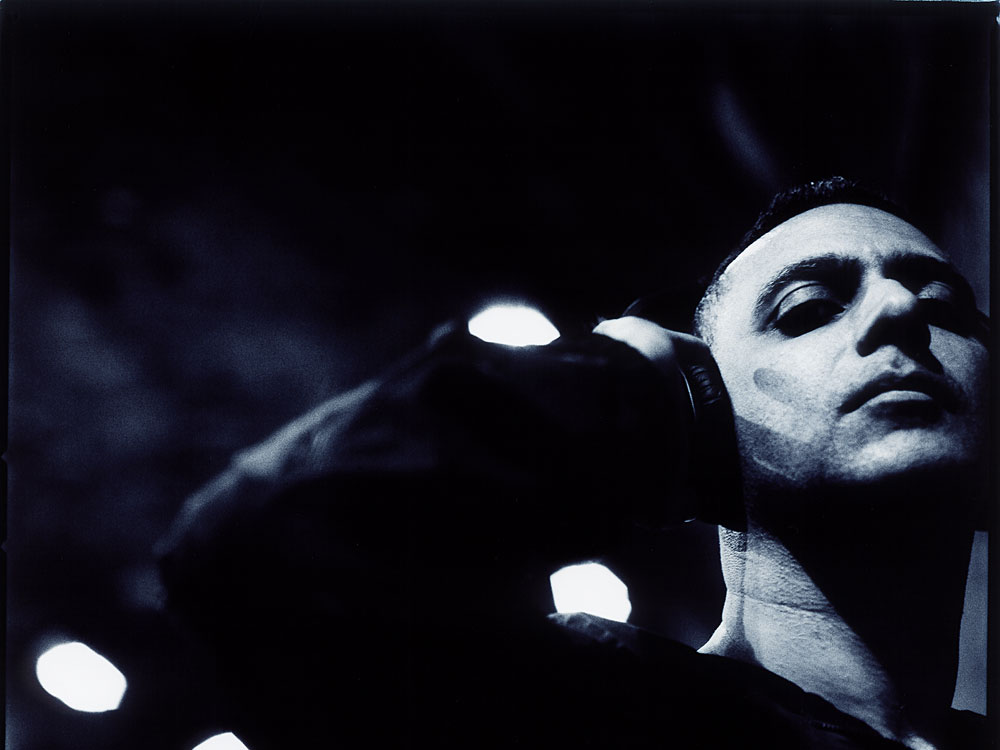 Nitin Sawhney doesn't usually sing on his records, but he isn't one to mince words.

"It makes me laugh when I hear people saying that music or art becomes too political," Sawhney says. "Because I think, well, if you got nothing to say, you don't open your mouth."

For his latest album, London Undersound, Sawhney says he wanted to say something about the aftermath of the July 2005 terrorist attacks in London. He says the train and bus bombings tore something in the fabric of London, giving rise to paranoia and suspicion toward the city's minority communities.

"I didn't want it to be a really negative album or anything like that," Sawhney says, "and one of the reasons why I got so many collaborators involved in the album was because I wanted to dilute some of the intensity that I felt about London."

So he worked with the Spanish group Ojos de Brujo, sitar player Anoushka Shankar, even Paul McCartney. Fellow Londoner and reggae singer Natty says that Sawhney is the kind of guy who thinks about music first.

A New Britain In Sound

Over the past several decades, as Britain itself has evolved into a more multicultural society — home to a new generation with roots in Africa, Asia and the Middle East — so, too, has its music scene. Sawhney is at the forefront of capturing the sound of the new Britain. He's the kind of musician who can perform with the London Symphony Orchestra at the Royal Albert Hall one day and DJ a club in Singapore or Dubai the next.

"What he's trying to say is that we should be colorblind in terms of our sort of cultural understanding of Britain and London," says Laura Barnett, an arts editor who profiled Sawhney for the British newspaper The Guardian. "We're all Londoners. We're all British. We're not British-Asians, we're not white, we're not black; we're just people. And I think that's what he does musically: By drawing all these influences together into one organic whole — which is more successful on some occasions than others — he's creating something greater than the sum of its parts. And that's kind of who we are: We're a mongrel mix. And he celebrates that."

Sawhney works out of studios in Brixton, a neighborhood in South London hit by race riots in the 1980s.

Outside the entrance to the Brixton tube station, groups of Asian women in headscarves walk past Afro-Caribbean families on their way to the Sunday market.

Inside his large studio space, Sawhney has gathered seven musicians to rehearse for an upcoming performance. They're seated in a long semicircle, with Sawhney at one end, flamenco guitar by his side. He has a subdued, understated presence as he guides the players — a drummer, a cellist, a flutist, a tabla player and one of three vocalists, a young white singer named Nicki Wells.

"You almost can't hear that it is a white woman singing an Indian raga. There's a stripping that goes on and a melding, which is amazing," says Yasmin Alibhai-Brown, a columnist for the British newspaper The Independent. "He is a supreme musician, and I think he has this facility of bringing people together — of almost stripping people of their inherited identities when they work with him."

What Sawhney does is often called "fusion." He prefers confusion. He says he wants to challenge what his listeners expect when they see a blond singer take the mike, or what they assume when they see an Indian composer step onstage.

"And that's one of the things I like to do, is decontextualize certain traditional forms so that we hear them in a different way and we start to become more aware of the power of them," Sawhney says. "Because I think you can get used to hearing certain singers in one way and think, 'OK, I know what that's about,' but as soon as you hear something else going on underneath their voices, you look at them differently. It gives you a new perspective; a new angle on hearing how their voice comes out and what they have to say."

Sawhney is a self-professed workaholic: London Undersound is his eighth studio album. It adds to a critically acclaimed body of work that already includes more than 40 film soundtracks, original pieces for the National Ballet of China, even the Playstation 3.

In 2006, he composed a new score for the 1929 German silent film A Throw of Dice, set in India. It was projected in London's Trafalgar Square, as Sawhney performed with the London Symphony Orchestra before an audience of thousands.

That orchestral score was deeply influenced by the Indian classical music Sawhney had heard as a child at home. His parents immigrated to Britain from India in 1963, just a year before he was born.

He and his brothers were the only nonwhite students at school. He says that throughout his life, he turned to music — and a community of musicians — to mitigate the friction of racism.

But just as Sawhney's music continues to blur the outlines of what a British record can sound like, his generation is part of a broader trend that's recasting what it means to be British.

Yasmin Alibhai-Brown says that while politicians debate the merits of multiculturalism in Parliament — whether all this mixing is good or bad — those debates overlook what's already happening on the ground.

"In terms of friendship, love, sex, there just isn't a drama here anymore about whether it should be allowed or should be seen," Alibhai-Brown says. "It just is who we are. And that says something. Because from that stems arts, stems music, stems theater — but also stems eventually a new national identity."

And in breathing life into London's "undersound" — and bringing to stage performers from the city's newest communities — Sawhney continues to rearrange the sound of the new Britain.