Accessibility links
Should 'The Office' Be Used In HR Training? What does Dunder Mifflin — the fictional firm at the heart of television's The Office — have to teach us about workplace diversity? Plenty, according to some human resources experts. And in some cases, the show's dysfunctional comedy is just mirroring real life.

Should 'The Office' Be Used In HR Training?

Should 'The Office' Be Used In HR Training? 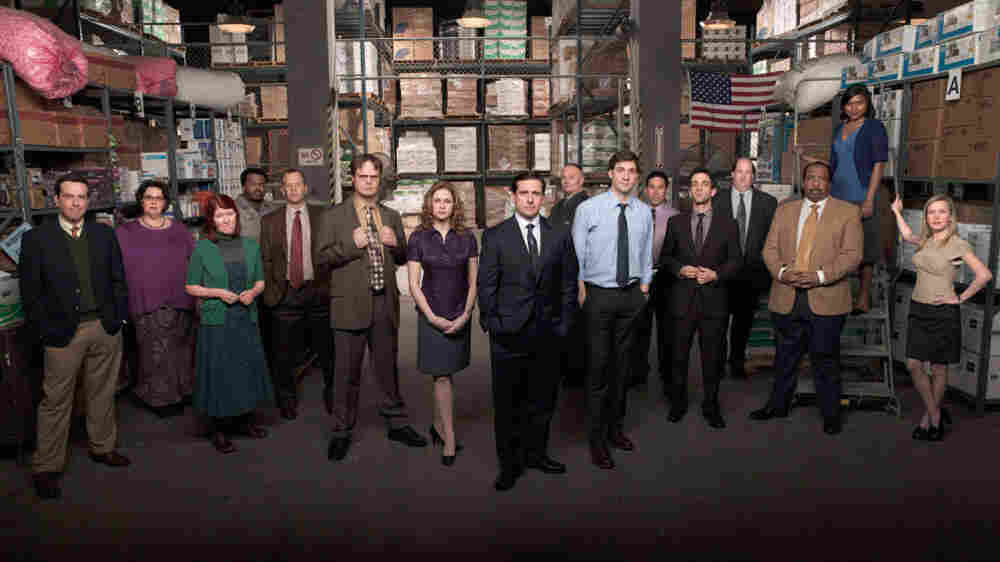 The cast of NBC's "The Office". Courtesy of NBC/Universal hide caption

The Office can be seen as a primer for everything you shouldn't do at work. Click below to watch some of the sitcom's most politically incorrect scenes.

Diversity Day - The beginning of the end for Michael Scott

Business Ethics Seminar - "What is right, what is wrong ... who's to say?"

Gay Witch Hunt - Oscar comes out of the closet

"Collar" Blind - The warehouse and the office mix it up

Sexual Harassment - Scranton gets a visit from corporate HR

The Office, a comedy about a jumble of oddball workers trying to get along in a claustrophobic environment, is a phenomenon of our times, a period when the American workforce is more diverse than it has ever been.

But what does the fictional office tell us about the national workplace? After all, not every office has a leader as bumbling and misguided as Michael Scott (Steve Carrell), much less a "Do Not Mock" list or a policy on being "collar blind."

Though the show is clearly a caricature, there are grains of truth in the dysfunctional conflicts that drive its humor, says Sheri Leonardo, senior vice president for human resources at Ogilvy Public Relations.

"As an HR person, I sometimes cringe," she said. "Some of the stuff is so outlandish, politically incorrect, morally incorrect and everything else — but at the same time I say, 'God, I would love to take clips of this and use it for training, because it's so perfect.' "

A 30-year human resources veteran, Leonardo says that although the characters' insensitivities are exaggerated, she can think of real people who fit many of the show's office stereotypes: the out-of-touch and politically incorrect boss; the peace-keeping secretary; the ambitious underling who doesn't care whose toes he steps on to suck up.

"It's sad, but there are people who do have the insensitivities to others around them ... to what makes people comfortable or uncomfortable," Leonardo said.

That view is shared by Jean Mavrelis, a diversity consultant and co-author of the book Corporate Tribalism.

"You'd be surprised how many executives are sent to our diversity class to be 'sensitized' so they don't have to be fired," Mavrelis said in an e-mail.

It's that kind of tension that animates The Office. Every episode depicts employees doing and saying things that, in the real world, might charitably be called ill-advised — but would more likely be seen as fireable offenses.

But if an office environment is too restrictive, Mavrelis says, that tension is often counterproductive.

"The worst climate for learning about diverse others," she said, "is one in which white males are afraid that someone will call the diversity hot line and end their careers if they make a 'mistake.' "

And in real life, just as on the show, Mavrelis has seen moments that seem to come more from left field than from a prejudice.

"In one session, we asked a group what they would do if they were a white waitress/waiter and a black customer accused them of being racist," she said.

"A South Asian woman raised her hand and offered, 'I would bring her some cake.' Needless to say, the room was speechless."

The Tricky Intersection Of Cultures

Awkward moments are the fuel that powersThe Office, and many of the conflicts the show portrays stem from the challenge of seeing the world from someone else's perspective.

Sylvia Ann Hewlett, an economist and founding president of the Center for Work-Life Policy, calls the show's overall vibe "discomfort with difference."

"The stereotypes are still tricky to deal with," says Hewlett, who heads a task force focusing on developing female and multicultural talent.

In her view, the show's younger workers deal with diversity, and each other, better than do the older ones. And that correlates to what Hewlett sees in today's workplace, which has always been more diverse for those between the ages of 18 and 30 than it was for their older colleagues when they began their jobs.

Hewlett sees the gay Oscar Martinez (Oscar Nunez) on The Office as an example of this generational divide. Oscar is out to his co-workers at Dunder Mifflin. But he backs out of bringing a date to the company Christmas party out of fear — or perhaps certainty — that the situation will be awkward.

Hewlett says she wouldn't find the plot line convincing if the character were in his 20s. But she sees it holding true for older employees, who tend to be more reluctant to share their personal lives at work.

The Office As Crucible

For all its dysfunctional quirks, the fictional paper company in Scranton, Pa., is actually more diverse than the average American workplace, Leonardo says — especially for a company its size.

According to Leonardo, small firms tend to be more homogeneous than larger corporations. The reason, she says, is that people often tend to hire those they see as similar to themselves — and a small company is less likely to have rules and mechanisms to combat that tendency.

But when a small staff is diverse, as in The Office, the boundary between friends and colleagues is more likely to be blurred.

Workers in a small, intimate office, Leonardo says, "have a tendency to think, 'Well, we're all friends.' " And that can lead a co-worker to ignore the possible fallout of discussing personal matters like religion or sexual orientation.

And if the office space is the size of the set of The Office, there's every chance those discussions and jokes will be overheard. On the show, Carrell's Michael Scott often seems to deal with that situation by being an equal-opportunity offender.

As he tells an HR expert in an episode about sexual harassment, "There is no such thing as an appropriate joke. That's why it's a joke."

Mavrelis says that despite the challenges diversity might pose, it's possible to both celebrate and smooth over cultural differences in the workplace.

"But it is critical to create a climate where diversity 'mistakes' can be made and people can be learners," Mavrelis says.

That means that someone who has been accused of being insensitive, or even racist, should be ready to apologize — and to learn from the experience. The key is that people consider the impact words and deeds have on people with different social and cultural experiences from their own.

"We've been able to move people to a place where they go from taking cross-cultural communication breakdowns personally, to asking themselves, 'I wonder if something cultural is going on here,' which changes the conversations," Mavrelis said.

Still, anyone who might be tempted to use Office-style humor to bridge cultural barriers in the workplace ought to be very careful.

"Humor is the least effective way to build relationships at work, yet having a sense of humor is critical," she said.

"The episode of The Office where they celebrate 'Diversity Day' is hysterical," Mavrelis said, "and shows how difficult it is to discuss diversity when people don't know what they don't know."

The best way for a white boss like Michael Scott to build cross-cultural relationships at work, Mavrelis says, is to help a diverse group of employees develop their careers.

"That builds trust, which in turn builds goodwill for when white folks do make the inevitable diversity blunders," she said.