Accessibility links
Stepped-Up Drone Strikes Test U.S.-Pakistan Ties Missiles fired by unmanned U.S. aircraft have hit targets across the Afghan border since 2006. But an increase in the barrage is sparking growing public anger — a political problem for the Pakistani government. 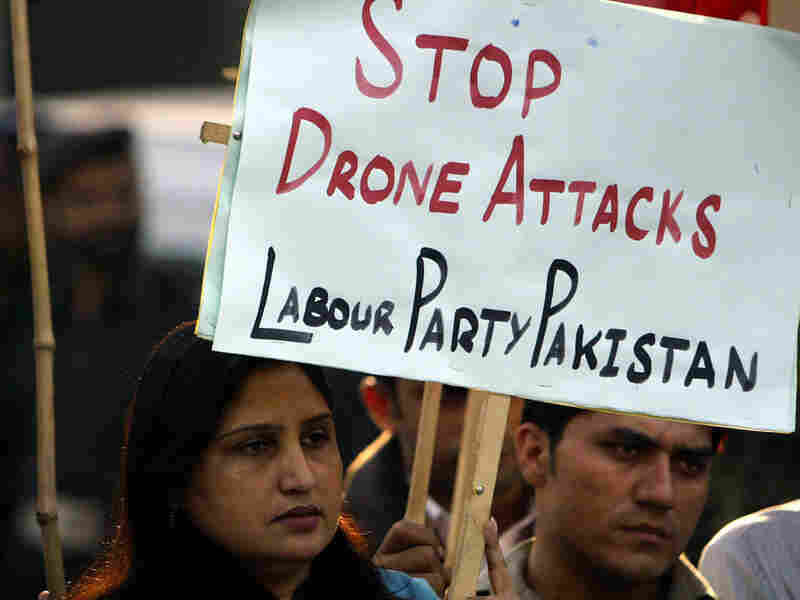 Supporters of the Pakistani Labour Party rally against the United States and condemn drone attacks on militants in Pakistani tribal areas along the Afghanistan border on Dec. 4 in Lahore, Pakistan. K.M.Chaudary/AP hide caption 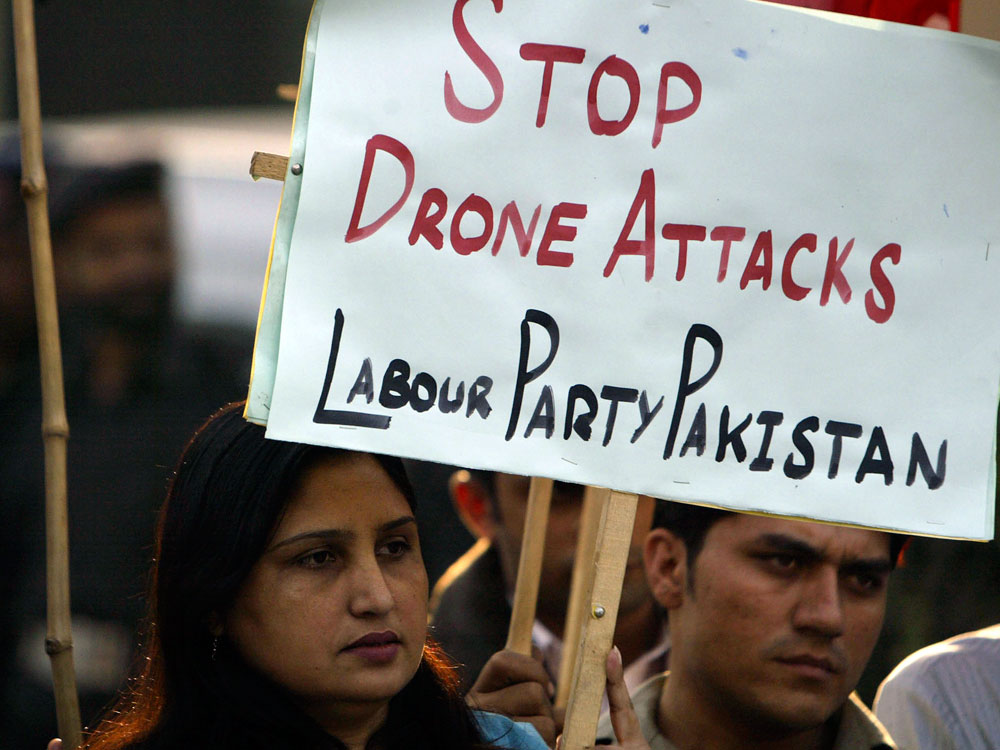 Supporters of the Pakistani Labour Party rally against the United States and condemn drone attacks on militants in Pakistani tribal areas along the Afghanistan border on Dec. 4 in Lahore, Pakistan.

The Obama administration has been ramping up CIA drone attacks, especially across the border in Pakistan. More than half of the estimated 100 missile strikes there since 2006 took place in the past year.

Now the targets of those American missiles are striking back.

From Informant To Bomber

"All the fighters who sought refuge with Baitullah Mehsud are entrusted with the duty to revenge him in the U.S.A. and outside it," Humam Khalil Abu-Mulal al-Balawi said.

What he didn't say in that tape was that he provided the Americans with information for other drone attacks against al-Qaida.

A former intelligence official tells NPR that the bomber was "feeding us low-level operatives and we were whacking them."

Balawi's path from informant to suicide bomber highlights a secret and growing fight: As the U.S. sends thousands more troops to Afghanistan — and mounts the occasional drone missile strikes like those on Tuesday — it's stepping up drone attacks on insurgent safe havens in Pakistan.

"The policy debate that we had with respect to Afghanistan and Pakistan is focused on eliminating the safe havens, which are now in Pakistan. Originally, they were in Afghanistan," Adm. Mike Mullen, the nation's top military officer, has said. "It is very focused on those safe havens." 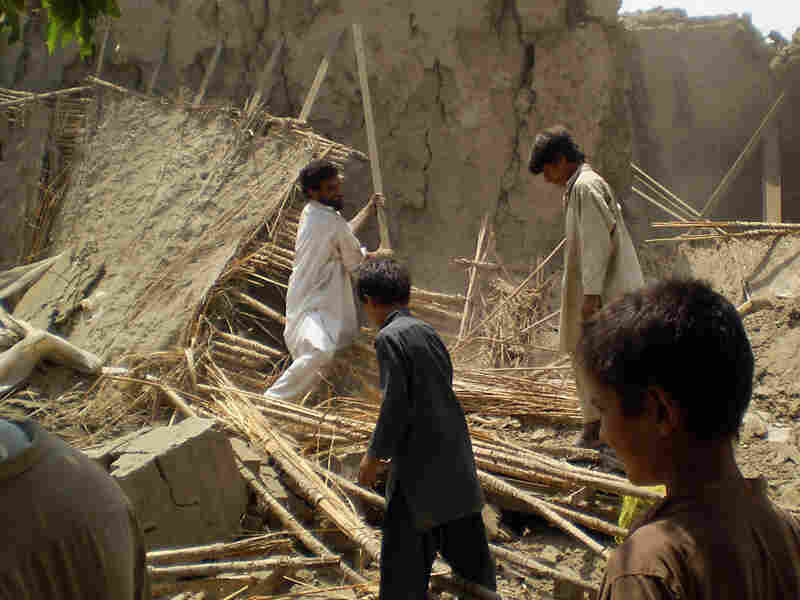 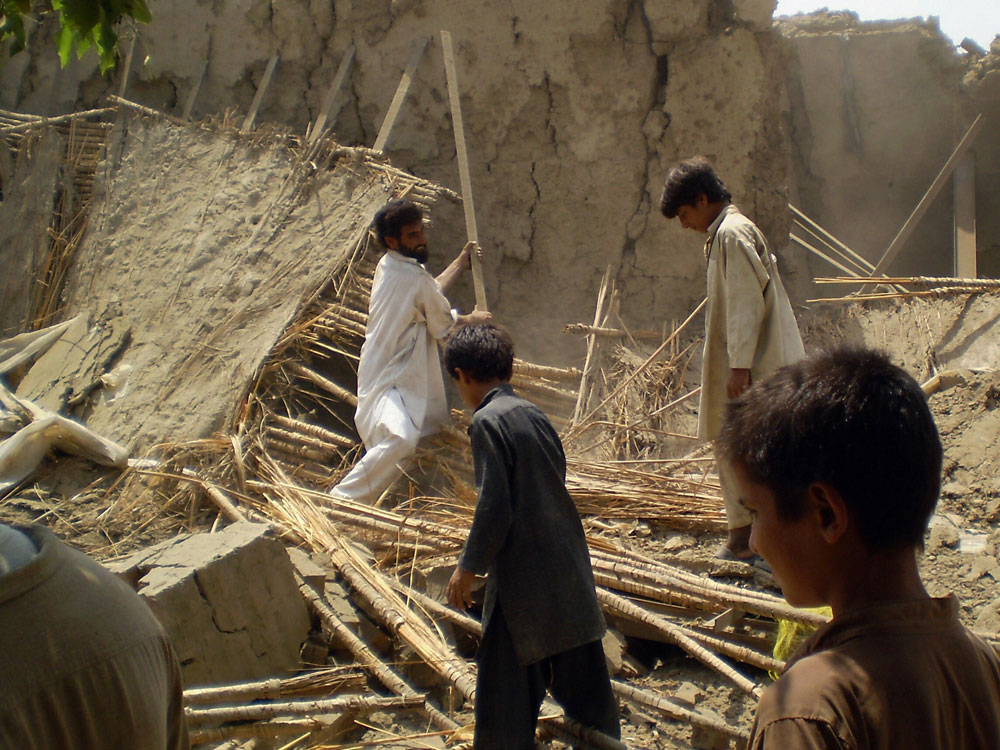 Pakistani villagers gather at the rubble of houses belonging to supporters of Pakistani Taliban chief Baitullah Mehsud, which were destroyed by security forces in Dera Ismail Khan on Aug. 5, 2009.

That focus is through drone strikes, mostly CIA aircraft flown from bases in Afghanistan and Pakistan. The increase in the number of those attacks reflects the Obama administration's twin goals: defeating al-Qaida and bringing security to Afghanistan.

But Shuja Nawaz, an expert on the Pakistani military, says there's growing public anger in Pakistan over the American air attacks, which are also killing civilians. Pakistan's government, Nawaz says, wants to have it both ways.

"The government of Pakistan pretended that this was the U.S. doing something unilaterally, when a fair amount of evidence is now available that many of the strikes were taking place with Pakistani assistance," he says.

The assistance includes providing the Americans with targeting information. The drone strikes, according to one estimate, have killed about 1,000 people since 2006. As many as a third of them were civilians.

"Casualties inflicted on innocent people put us in a bad light and make it difficult for Pakistan to defend its relationship and cooperation with the United States," he says.

Besides the civilian death toll, there's another problem: The United States and Pakistan differ over which Islamist fighters to target inside those safe havens.

Pakistan is content to help the Americans target al-Qaida and Pakistan Taliban leaders seen as a threat to the Pakistani government.

But Pakistan is less willing to help the United States go after Afghan Taliban fighters. Nawaz says these insurgents — the Haqqani network, for example — are seen by Pakistan in a more positive way. "As a potential ally or at least not a group that would be opposed to Pakistan," he says.

Pakistani officials expect elements of the Haqqani network to be part of the Afghan government in the future. And they need allies to ward off any growing influence of India, say Nawaz and other analysts. India is providing assistance to the Kabul government and making inroads within Afghanistan, which is especially troublesome to its archenemy, Pakistan.

But, at the same time, these are some of the very groups the U.S. wants to go after.

"The Haqqani group straddles the border and is responsible for some of the most serious events that take the lives and injure American and allied forces," said Richard Holbrooke, the special envoy for Afghanistan and Pakistan. "There's no question about that."

But Holbrooke wouldn't criticize Pakistan when he appeared at a recent Washington conference.

"Continued discussion of this issue in public works against the goal, which is a reduction in the risk to our American forces in Afghanistan," he said.

Translation: We'll talk about it privately with the Pakistanis.