Accessibility links
New Airport Body Scans Don't Detect All Weapons The Transportation Security Administration is about to put hundreds of high-tech scanners in U.S. airports to deter terrorists. The scanners use a technology called backscatter X-ray. It's impressive, but some say it's far from perfect 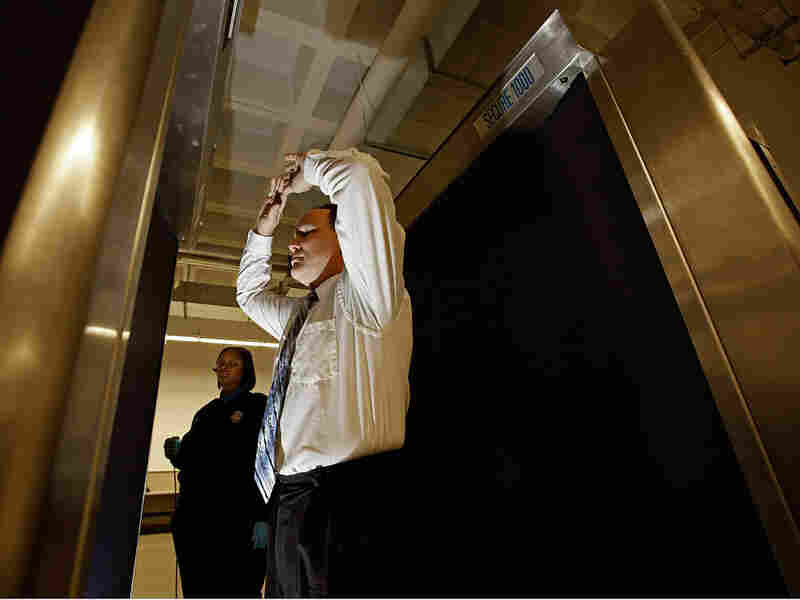 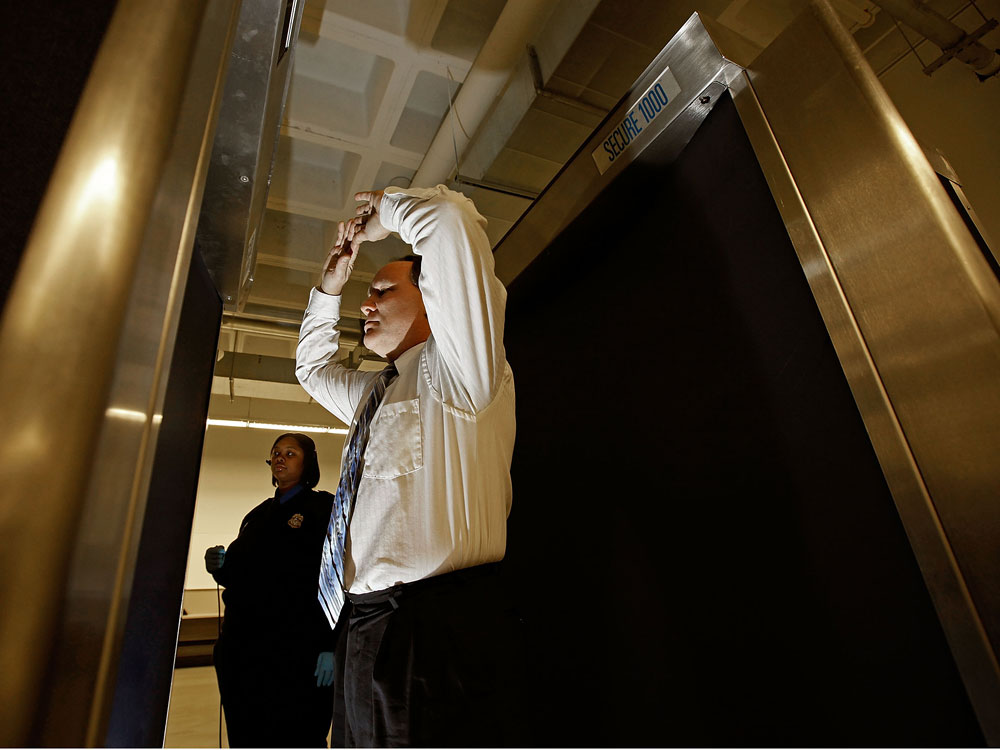 A man stands inside a backscatter scanner at Ronald Reagan Washington National Airport. Backscatter technology uses low-level X-rays to detect hidden metallic and nonmetallic objects, such as weapons and explosives, without physical contact.

The Obama administration's plan to protect air travelers from terrorists is counting on a technology that is powerful but imperfect, experts say.

The plan will place hundreds of full-body scanners in airports around the country. These scanners use a technology called backscatter X-ray to create images that can reveal weapons or explosives hidden beneath a person's clothing.

But they don't detect everything, and they won't be in every airport.

President Obama announced the wide deployment of these scanners two weeks after a Nigerian man allegedly tried to blow up an airplane using plastic explosives concealed in his underwear on Christmas Day.

The scanners use X-rays, but they're not like the X-ray machines you see in a doctor's office.

Medical X-rays are powerful enough to pass all the way through your body. The airport machines rely on a much weaker beam, says Steven Smith, an electrical engineer.

Smith designed one of the first backscatter X-ray scanners 20 years ago. These days, he runs Spectrum San Diego, an electronic imaging company.

The backscatter machines use X-rays that penetrate through clothing and about an inch into a person's body, "where they ricochet or backscatter back in the same direction they came from," Smith says.

A sort of digital camera captures these reflected rays.

Backscatter X-ray devices are safe because they expose people to an insignificant amount of radiation, Smith says. But he says the images they produce can look a lot like a nude photograph.

"It shows everything under your clothing," he says. "And if you had something within a few millimeters of your skin's surface, it would show that also."

The government plans to use software that makes the images in airports less graphic.

Prisons have been using the backscatter technology for many years to find knives, guns and contraband, even though the machines cost more than $150,000 apiece.

More recently, the U.S. military has used the scanners in Iraq to protect bases there from terrorists.

"In general, body scanners are able to give you the same degree of detection capability as frisking someone would," Smith says. "But it is far less invasive."

Scanners Could Miss Some Contraband

Smith, a former police officer, says he doesn't want to talk about what the scanners might not find. He says that could help terrorists.

Other experts, though, say backscatter scanners would probably miss a weapon or explosive concealed in a body cavity.

And that apparent weakness has provided an opportunity for an Indiana company called Nesch LLC, which is developing another low-dose X-ray device that can find contraband where other scanners can't.

This machine is called DEXI, for Diffraction Enhanced X-Ray Imaging.

"To my knowledge it's the only one that very reliably can detect the presence of such substances, explosives or illegal substances that are hidden inside of a human body," says Ivan Nesch, the company's president and CEO.

'The Last Line Of Defense'

So can any of this X-ray technology really make air travel safer?

"Of course not," says security consultant Bruce Schneier. "It's sort of magical thinking."

Schneier sees a couple of big problems with the government's strategy.

First, he says, every technology has its limits. And he's not reassured by the government's new scanner.

Another problem, he says, is that even hundreds of scanners won't be enough to protect every airport.

And once a terrorist has made it through security anywhere in the system, they're not screened again, Schneier says.

"So unless these machines are in every airport in the country," he says, "all we're doing is making the terrorists take another flight before they launch their attack."

The government's real problem isn't a lack of technology, Schneier says. It's a tendency to react to what has already happened, not what might happen next time.

"Airports are the last line of defense, and they're not a very good one," Schneier says.

He says taxpayers would get more for their money if the government invested less in hardware and more in investigations of potential terrorists and better intelligence.