Accessibility links
Emotional Training Helps Kids Fight Depression Researchers have developed a curriculum that teaches middle-schoolers to challenge negative thinking in times of emotional stress. Studies show that it can buffer against the onset of depression, suggesting that resilience is a skill that can be learned. 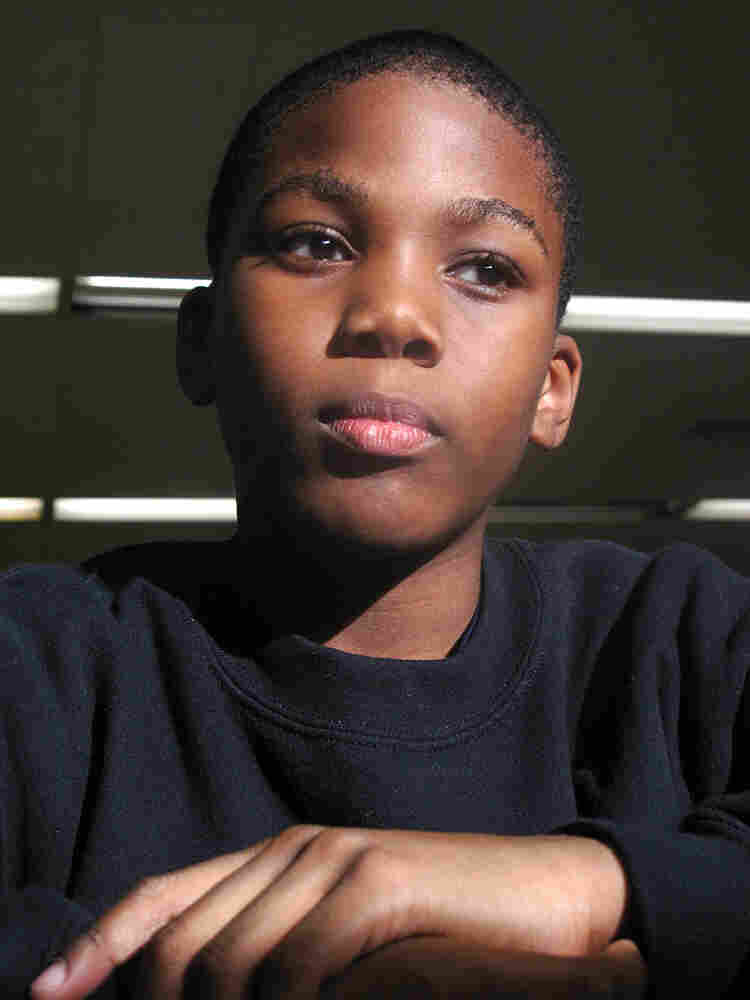 Bryce Marcus is a fifth-grader at the KIPP Infinity School in the West Harlem neighborhood of New York City. His curriculum includes emotional development training that teaches him to replace negative thinking with more realistic and flexible thinking. Allison Aubrey/NPR hide caption 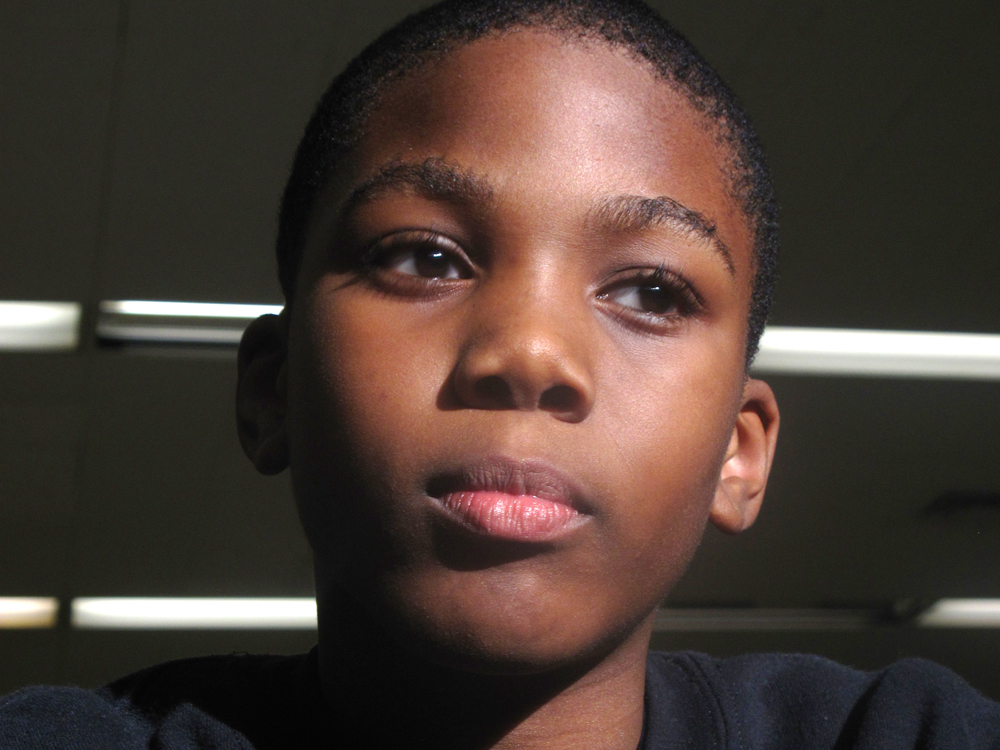 Bryce Marcus is a fifth-grader at the KIPP Infinity School in the West Harlem neighborhood of New York City. His curriculum includes emotional development training that teaches him to replace negative thinking with more realistic and flexible thinking.

How many of us have caught ourselves thinking, "Ugh, this will never work out," or "How could I be so stupid?"

"There's a pretty common bias to think about the negative," says researcher Jane Gillham of the Penn Resiliency Program, a behavioral therapy program at the University of Pennsylvania.

Studies show that the habit of reacting negatively can lead to depressive thinking. "There's a lot of evidence that pessimistic thinking undercuts achievement and well-being," Gillham says.

If a person tends to see small disappointments as catastrophes or failures, they can become depressed or anxious. It's a common trick our minds can play on us, as children and as adults. But once thoughts are more aligned with reality, emotional responses can change for the better.

Gillham and her colleagues have developed a curriculum aimed at teaching middle-school students specific strategies to challenge these thought patterns and manage stress. It's backed by 15 years of research that shows the benefits of this strategy.

It's called resilience training, and it can be as powerful as taking antidepressant medicines.

At New York City's KIPP Infinity Charter School, in the neighborhood of West Harlem, resilience training is squeezed in after math.

The academic schedule is tight, and the students' days are packed with rigorous academics, but Tom Brunzell, the dean of students, says it's important for these fifth-, sixth- and seventh-graders to take time out for "Emotional Health 101."

In one session, he talks to the students about how "self-talk," the things you tell yourself, can lead to different feelings when disappointing things happen.

Brunzell hands each student a copy of the same cartoon strip. In the first picture, an angry coach is talking to a nervous player. The coach is pointing to a zero score, and he's unhappy. 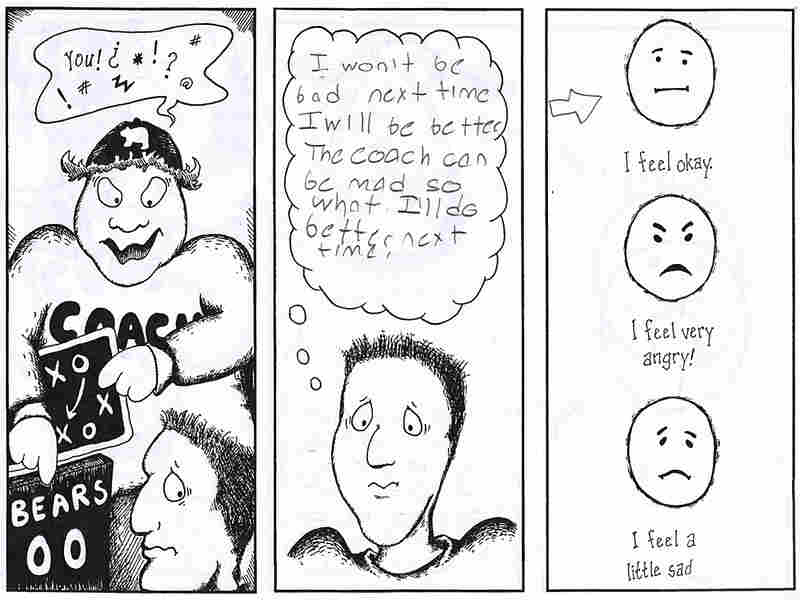 This thought-emotion worksheet helps teach kids how their reactions to a scenario can shape their feelings and how, to a degree, they can control these reactions. In this scenario, student Bryce Marcus has filled in the thought bubble with a positive way to interpret the situation. Courtesy of Jane Gillham, Lisa Jaycox and Karen Reivich hide caption 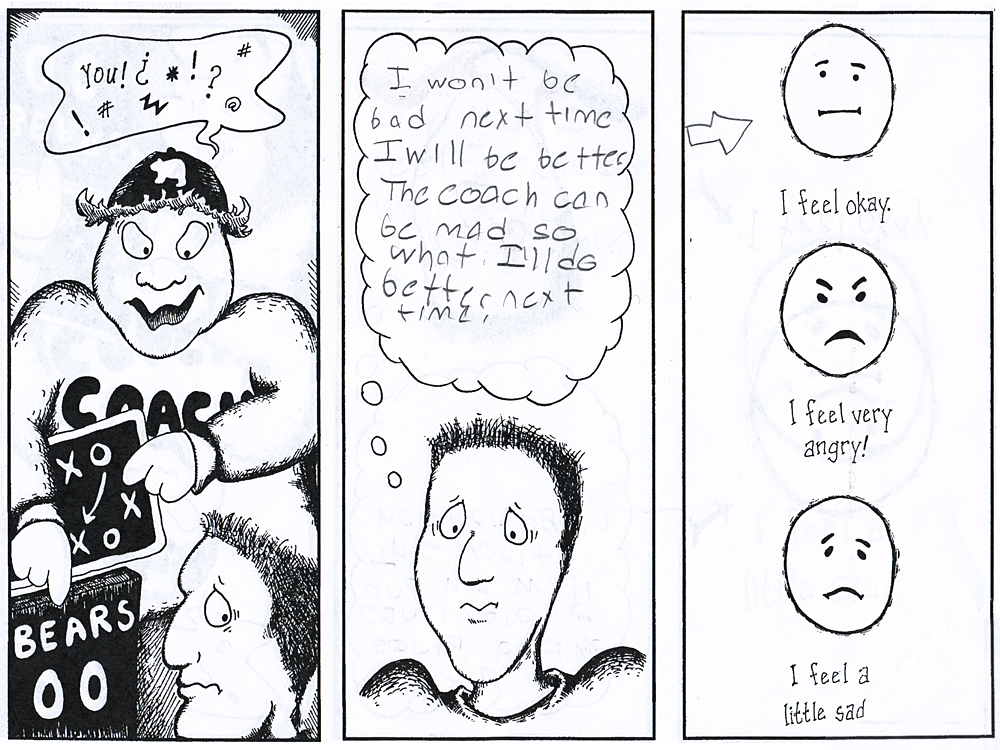 This thought-emotion worksheet helps teach kids how their reactions to a scenario can shape their feelings and how, to a degree, they can control these reactions. In this scenario, student Bryce Marcus has filled in the thought bubble with a positive way to interpret the situation.

In the second box, there's a picture of the player. A thought bubble over his head is blank. The students' job is to fill the bubble with what they think the boy is thinking, and then indicate one of three possible emotions associated with the thoughts: sadness, anger, or "I feel OK."

Student Alicia Echavarriato shares her interpretation of the situation first. "What I wrote in my thought bubble is this: Why is the coach so mean? His screaming makes me want to cry ... I think I have a tear," she says. To her, the coach's anger feels like a personal attack, which would make her feel sad.

To Anthony Ortiz, the scenario evokes anger. In his thought bubble, he wrote, "Man we lost — we let the coach down."

But here's another way to see the same scenario. In student Bryce Marcus' bubble, he has written, "The coach can be mad ... I'll do better next time."

Bryce's player didn't take the coach's anger too personally. And he realized the situation wasn't permanent.

"What I want you to understand," Brunzell tells the students, "is that coach was being very negative in this cartoon. But you have a lot more control over your feelings than you think." He wants them to see that there is a strong connection between their "self-talk" and the feelings that result.

The kids nod their heads and seem to get it. But carrying these lessons from hypothetical cartoons to real life takes a lot of practice.

Anthony says that just the other day, he missed what he says was an easy problem on a math test. "You just think you're stupid automatically," he says. "That's the first thought, but you have to fight that away."

He's learned to stop and think about the real facts. Overall, his grade is pretty good. And if he tried harder next time, he would probably do better.

Not Just About Positive Thinking

"It's not just about telling yourself positive things over and over," says Gillham. That could be delusional. "It's reality-based," she says. Gillham says there are other strategies, too. She wants kids to learn to take a step back and reflect before reacting to disappointing events.

These skills can help prevent depression, and they have powerful effects.

Bryce says he's really trying to use what he's learned. "It's come in handy when I get mad," he says. A few weeks ago he was furious with his sister when he came home from school and found his video game on the floor, broken.

But before he started a fight, he took a deep breath. "I went into the bathroom, and I looked into the mirror and calmed myself down," says Bryce.

Gillham says this is a great example of a kid learning to be more emotionally resilient. "That's really what we hope for, is that kids will internalize the skills enough that they can use them in the moment," she says.

Gillham has recently reviewed 17 published studies on the effects of resilience training.

One study measured the effects of resilience training on middle-school students two years after the program ended. They looked for symptoms of depressive or negative thinking among the children.

"In the resilience training group, it was only about 22 percent," explains Gillham. This was about 50 percent lower than the kids who hadn't been through the training. "That was very encouraging," Gillham says.

Of course, this is no magic bullet. "I don't want to imply that depression doesn't have biological causes," says Gillham. Clearly, there is evidence for a strong genetic component, she says. And life events can lead to episodes of depression, too.

The toll of depression is huge. The annual cost to society is upward of $56 billion. If there's evidence that behavioral strategies can buffer against the onset of depression, it's significant, Gillham says.

"The evidence is starting to accumulate that these skills can help prevent depression, and they have powerful effects."