Accessibility links
Army Wives Battle With Their Own Mental Health It may not be a surprise that soldiers' wives report high levels of mental health problems when a husband is fighting overseas. But now, a new study looking at Army wives and stress finds that the longer husbands are deployed, the more likely the wife is to experience depression, anxiety and other mental health problems. 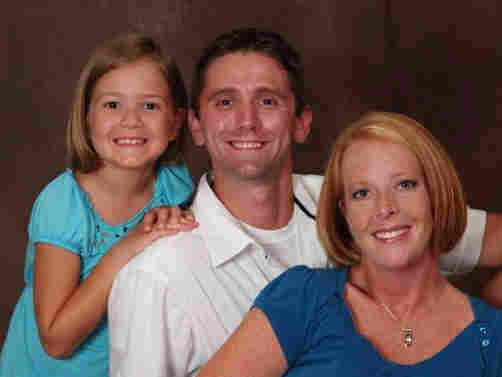 Keli Lowman of Faytettevlle, N.C., pictured above with her husband and daughter, calls the life of an Army wife a ”continuing stress.” Courtesy of Keli Lowman hide caption

Scientists have studied troops coming back from wars in Afghanistan and Iraq and found high levels of mental health problems. Now, researchers are starting to look more at the families of those fighters. A study in the New England Journal of Medicine finds that Army wives report a lot of stress when their husbands are sent to Afghanistan and Iraq. And the longer the deployment, the more likely the wife is to experience depression, anxiety, trouble sleeping and other mental health problems.

That deployment creates stress shouldn't come as a surprise.

Still, the study is welcome news for Army wives like Keli Lowman of Fayettevlle, N.C. "There's no surprise," she says, "but it seems to be surprising to the wives themselves, especially newly married spouses or spouses that have not experienced a deployment before. You will have a sense of worry like you've never felt before."

There's more worry when troops face second, third, and fourth deployments. Over just three years, Lowman's husband, James, was sent to Afghanistan twice and then to Iraq. "It's a continuing stress," says Keli. "We are a constant ready force. So you may exchange the distress of 'he's leaving' for the stress of 'he's gone,' to the excitement that 'he's coming home,' to the stress of 'he's going to leave again' in 12 months."

Since her husband, a helicopter pilot, was severely injured in 2005, there's been even more stress. She followed him to hospitals from the East Coast to the West, leaving their young daughter to live with friends and family. There was stress as James fought for his life and now today as he deals with traumatic brain injury and PTSD.

Keli Lowman sought help from her Army doctor at Fort Bragg. "I actually just walked into the clinic in tears one day and I just explained that I was having anxiety, I was having panic attacks. And I was handed three prescriptions, one for something to sleep, something for anxiety, something for depression. But there was no support. It was just, 'Take these, you'll feel better.' "

It took years to get the help that she says put her in a better place. There was free counseling from a sympathetic, local therapist. Then support from other Army wives. And advice on how to cope from the Wounded Warriors Project — a group that now employs Lowman to seek out other troubled Army wives.

Alyssa Mansfield, at RTI International, is the co-author of the study that showed widespread mental health problems among wives whose husbands are sent to war. "What we found was that the wives of soldiers who were deployed were more likely to have mental health diagnoses than wives of soldiers who were not deployed. And not only was it deployment versus nondeployment but also the length of deployment that turned out to be a factor."

The study also looked at the male spouses of Army women. But the total of men counted in the study was too low to make conclusions.

Because Mansfield based her work on visits to doctors, she wasn't able to measure women who had the same problems, but didn't go see a doctor. As with soldiers, there's a stigma, too, when their wives need mental health care. "We already know that there's a stigma associated with seeking help for mental health problems in military personnel," says the research epidemiologist, and wives are likely to feel that stigma for themselves. "For that reason, we actually believe that our estimates are conservative, that the problems might actually be greater than what we found in this study," Mansfield said.

Keli Lowman agrees there's a lot of stigma that keeps Army wives from getting care. "You're viewed as weaker or a complainer by other wives. Because everybody is in the same situation. All of our husbands are gone. When you hear one that is exceptionally loud about complaining of her two children or, you know, just things are awful for her, you get very aggravated because you're in the same situation. But everybody deals with the situations differently."

Mansfield's study of mental health problems among Army wives looked at Army medical records from 2003 to 2006. Since then, Army officials have tried to address the increasing stress on families, says Rene Robichaux, social work programs manager for the U.S. Army Medical Command. When a soldier is deployed, "the additional responsibilities of being a single parent, the loneliness, the worry about your soldier's well-being," create stress, says Robichaux, and then, when a husband comes home, there's "the additional stress that comes with integrating back into the family." Those growing stresses have become clear to Army health officials as the wars in Afghanistan and Iraq continue and soldiers go through repeat deployments.

As a result, in the past couple of years, the Army has contracted with dozens of new marriage and family therapists, says Robichaux. There's even counseling available by telephone, for people who live far from a city or a therapist's office. To reduce stigma, sometimes there's no record of who's getting therapy. And some stressed-out mothers whose husbands are at war now get up to 16 hours a month of free day care for their children. Also, the military has reduced the length of those deployments overseas — in part to try to reduce stress and mental health problems among troops, as well as among their family members and wives.