Accessibility links
Cartier's Jewels For America's Rich And Famous In tough economic times, everyone needs a little dose of glitz and glamour. A popular exhibit in San Francisco showcases the "trinkets" that French jeweler Cartier made for mega-rich Americans — including the Vanderbilts, the Astors and, later, Liz Taylor and Grace Kelly.

In tough economic times, everyone needs a little dose of glitz and glamour. Visitors are flocking to see the dazzle on display at the Legion of Honor Museum in San Francisco, where an exhibit called "Cartier and America" showcases precious pieces the French jeweler made for America's mega-rich.

Museum curator Martin Chapman shows off a grand — and enormous — pendant brooch that belonged to Marjorie Merriweather Post, the Post cereal heiress. A portrait hanging in her Washington, D.C., estate, Hillwood, shows her wearing this brooch — an 8-inch cascade of diamond and green glitter. 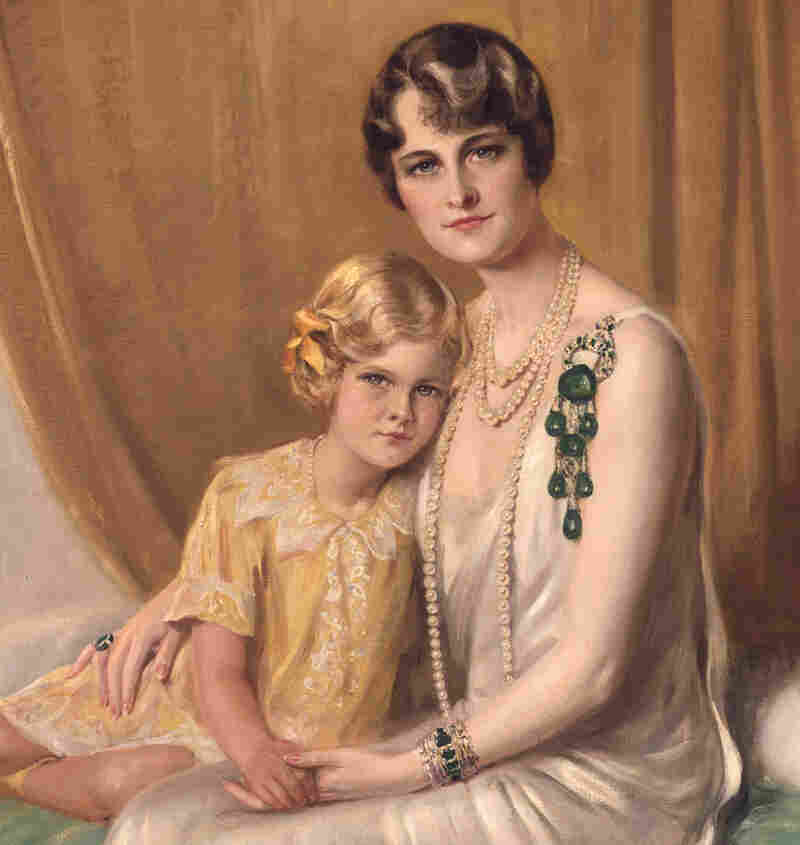 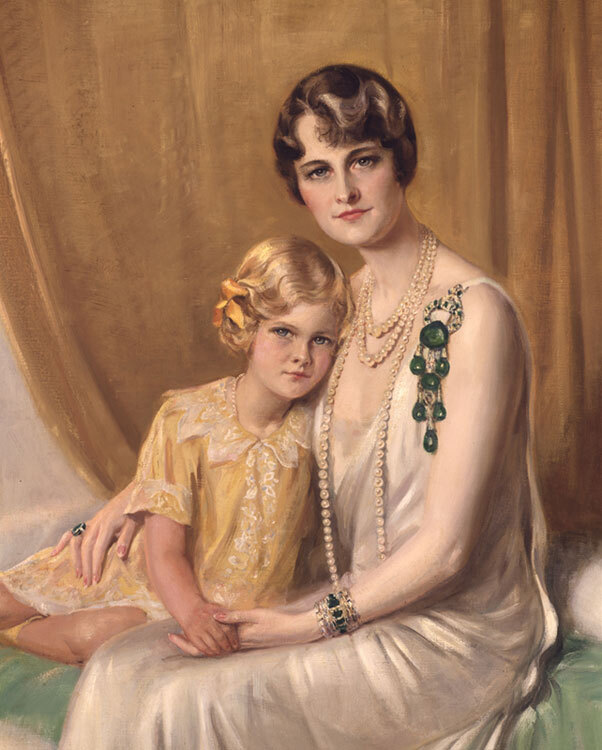 Cereal heiress Marjorie Merriweather Post wore a Cartier pendant brooch in a 1929 portrait. See Cartier's sketch and the actual brooch. She is pictured with her daughter, who grew up to be famous actress Dina Merrill.

"Some said she must have had a shoulder strap of iron to hold this up because it's an enormous object made of seven carved Indian emeralds," Chapman explains.

A talented shopper, Post was one of dozens of privileged Americans with big bank accounts and royal tastes who probably never realized they were carrying out an age-old custom of power adornment.

Chapman says that in ancient times in Europe, rulers used to go into battle wearing their best jewelry — a way to "buy themselves out of difficulties should they fall into enemy hands."

Cartier made its reputation in the 1890s, and in that gilded age, Americans like the Vanderbilts, the Morgans, the Astors and the Goulds got plenty of gilding from the French jeweler. In a 1909 photograph, Mrs. Cornelius Vanderbilt sports a tiara, necklace and bracelet.

"But the real concentration is at the bosom," says Chapman, "where she had a very large breast ornament which is made of fringed diamonds, ending in tassels, and in the middle is a very large diamond rose which she bought from Cartier in 1904."

A few years earlier, Queen Victoria's luxury-loving son Edward had named Cartier the royal jeweler for his coronation. Some of the tiaras fashioned for that event are in the San Francisco show.

In that same period, the jewelry Cartier made for Americans was often more elaborate than what was made for British and European royals. But as time went by, American tastes became a bit simpler. 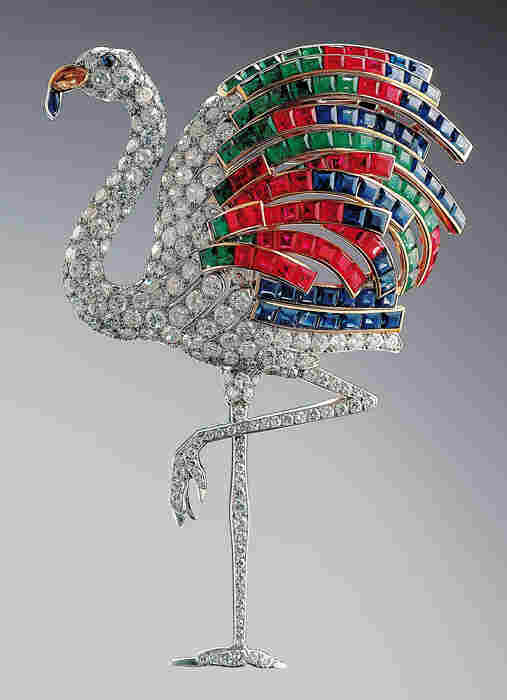 Cartier's flamingo brooch, made in May 1940 for Wallis, Duchess of Windsor. Louis Tirilly/Cartier hide caption 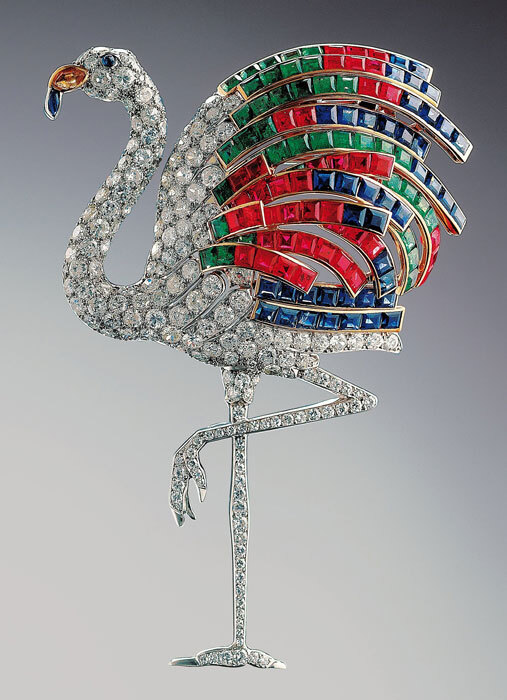 Cartier's flamingo brooch, made in May 1940 for Wallis, Duchess of Windsor.

Al Jolson, Grace Kelly, Elizabeth Taylor and Barbra Streisand were all Cartier clients. So was an American divorcee who notoriously married into royalty — Wallis Simpson, who became the Duchess of Windsor. The Duke brought in a necklace and four little gemstone bracelets and asked Cartier to take them all apart and reconfigure them.

"There is an important sense of recycling at that point," Chapman says. "With those pieces, Cartier came up with this extraordinary fantasy object: a clip brooch in the form of a flamingo, with its plumage bristling with rubies and sapphires and emeralds — not naturalistic coloring at all."

The pin was made in Paris in May 1940 — a month before the German invasion. The Windsors fled France and took the 3-inch flamingo pin with them.

The British branch of the jewelry store got involved politically during World War II.

"Cartier London was the center of the free French," Chapman explains. "They gave the upper floors to General de Gaulle. ... Cartier was very patriotic during the war." 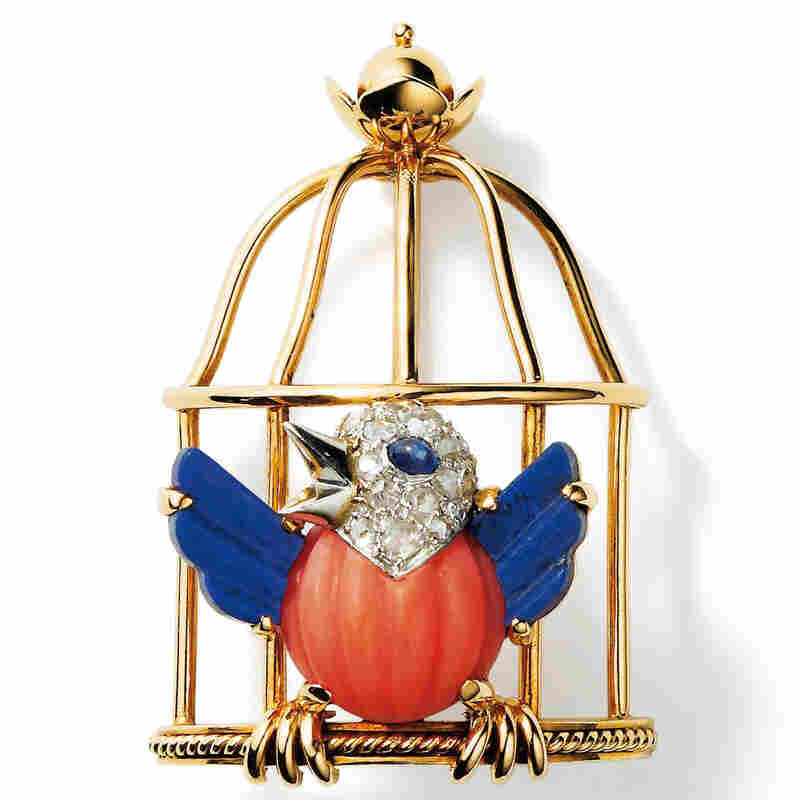 In 1947, after the end of World War II, Cartier made a brooch that depicted a bird escaping from its cage. Cartier hide caption 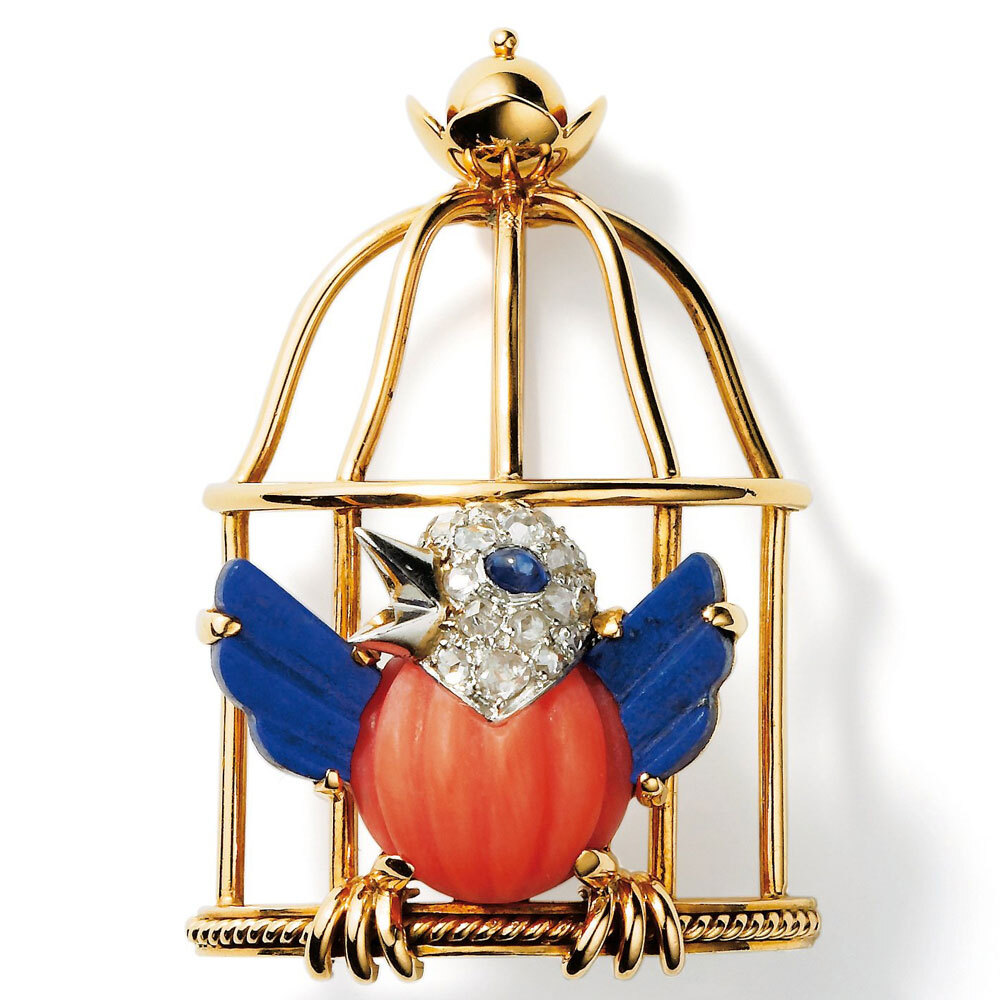 In 1947, after the end of World War II, Cartier made a brooch that depicted a bird escaping from its cage.

"It's made out of a very small amount of gold with coral, and lapis wings and a diamond-set head," Chapman says.

The pin was a subversive message from Cartier, protesting the Nazi occupation. In 1947, the jeweler made another bird and cage — but in this case, the doors of the golden cage were open, and the bird was flying to freedom.

"Yes, that's the idea — the joy of France emerging from the occupation of the Nazis," Chapman says.

Bejeweled and costly stories of trials and triumphs, "Cartier and America" is on view at the Legion of Honor Museum in San Francisco through April.