Accessibility links
'Cult' Hero Mike Daisey: When The Dollar Is Almighty The celebrated monologist is a man on a mission: To make audiences look a little differently at their relationship with their money. His solo show The Last Cargo Cult examines the American worship of wealth through the lens of a South Pacific religion that worships all things American. 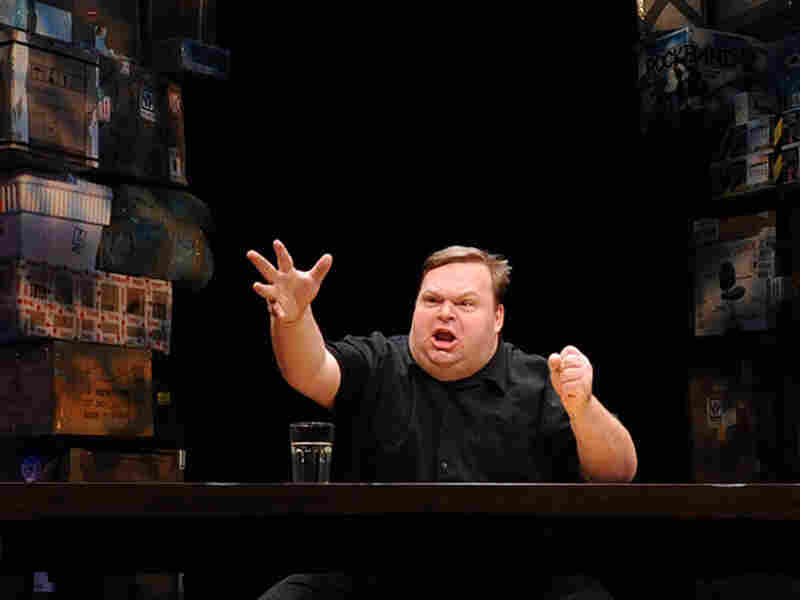 Monologist Mike Daisey commands his audience from a seat at a simple table at center stage. The author and performer of 15 solo shows, he was named the soloNOVA Artist of the Year for 2009. Stan Barouh hide caption 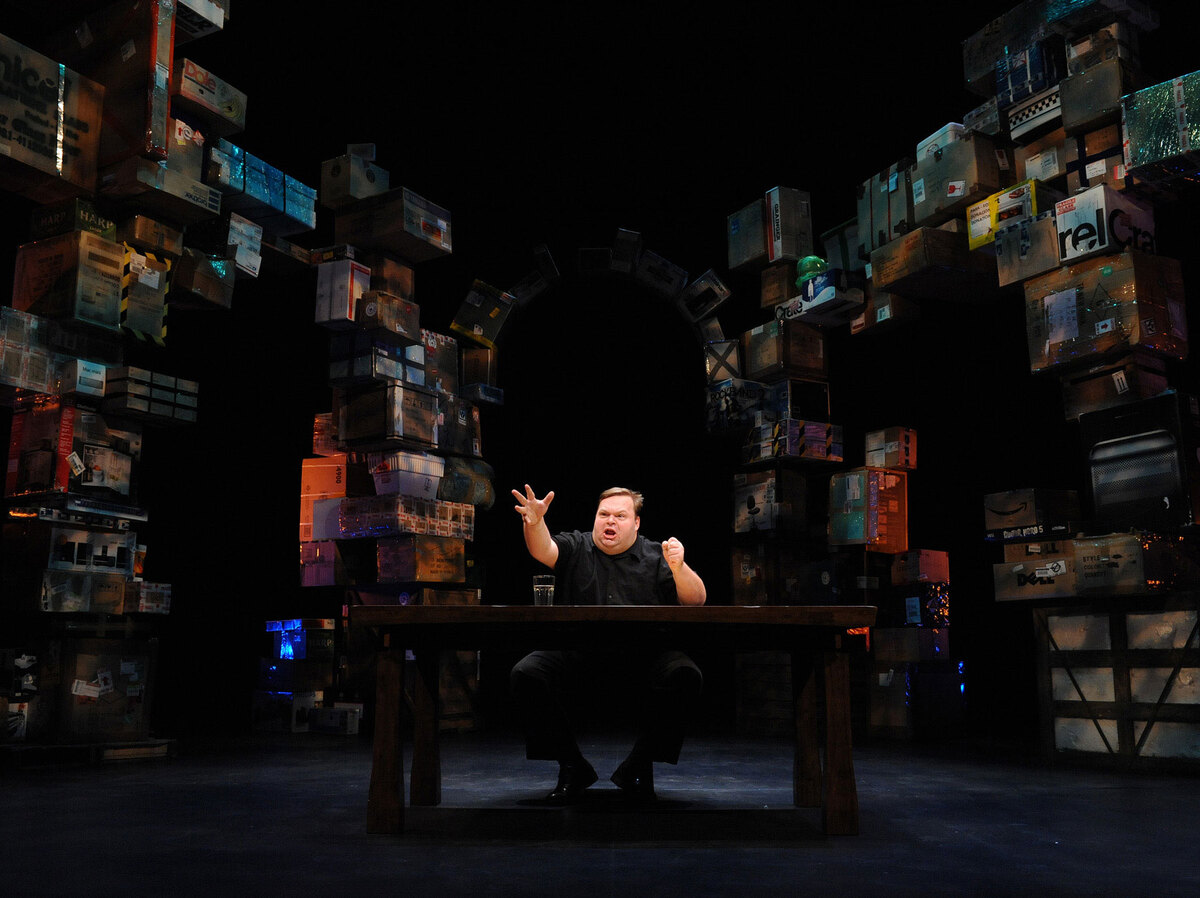 Monologist Mike Daisey commands his audience from a seat at a simple table at center stage. The author and performer of 15 solo shows, he was named the soloNOVA Artist of the Year for 2009.

When Mike Daisey has a message, he's willing to go a long way to deliver it. A really long way.

The master storyteller flew from Manhattan to a South Pacific island just to make a simple point: Money is power, and Americans love power. But they're not alone.

Daisey took his journey to the South Pacific island of Tanna because he was fascinated by the people there who practice a related form of worship: the cargo cult.

Cargo cults began in the South Pacific after World War II. During the war, Allied forces set up military bases on remote islands. Thousands of troops descended, and they brought with them modern amenities — radios, jeeps, refrigerators and such. Then they left, taking their goods with them.

But they left something behind. In his new show, The Last Cargo Cult, Daisey describes it as a kind of material hunger:

"In that moment, the want of the islanders crystallized," he explains in the show. "All over the South Pacific, independent of each other, religions sprang up that worshipped America — or, more accurately, worshipped the power of America, worshipped the objects of America."

To this day, some cargo cults survive. Each Feb. 15, the people of Tanna try to summon back the Americans — and their objects — in an annual celebration called John Frum Day. Last year, around the time the global financial markets were crashing, Daisey first read about the festival, and he was stunned: In the middle of the seemingly endless reports of financial ruin, Tanna somehow seemed to be a place "beyond the reach of money."

The Perils Of Working In Theater

Why Monologues Are His Calling

Why Working With Your Wife Is Good Business

"It was at that moment that I realized that I needed to go to this island," he says. "I had to do it because of what was happening in my culture."

Actually getting to the island was another matter. A number of checkpoints, breakdowns and pit stops marked his journey. And to top it off, his plane was a joke — or, rather, "the punchline of a joke about planes. You look at it, and you think, 'Really!?' "

After many a misadventure, Daisey was able to attend John Frum Day with thousands of others. He says the nine-hour celebration was a breathtaking experience.

"There's this beautiful silence, and they raise a huge American flag up a flagpole, and then they begin to tell the story of the history of America as they know it to be, woven together with their own history, in these massive dances that have hundreds — hundreds — of people. They put Broadway to shame."

Strands Of Different Lives, Pulled Together By A Master Storyteller

A Daisey monologue is an edgy blend of history, social commentary, comedy and autobiography, and Cargo Cult is no exception. Jason Zinoman, who writes about theater for The New York Times, has praised Daisey's storytelling skills, but his review of Cargo Cult made one observation that Daisey might not have appreciated: Daisey's style, Zinoman noted, shares similarities with that of Fox News commentator Glenn Beck.

A 'Cargo Cult' Near You?

"I think Glenn Beck is a great performer," says Zinoman, who meant it as a compliment. "One of the things that Glenn Beck does is, he tells several different narratives, and then they intersect in these unusual ways. And he makes these connections between seemingly disparate things — and that's what Mike Daisey does."

In Cargo Cult, Daisey connects what he calls the American worship of the almighty dollar to the way those island religions work. And he confesses to having a complicated relationship with money himself: As an artist, he doesn't make that much, and in the show he says the balance in his bank account is the single most important number in his life.

That's something he says the people he met on a remote island in the South Pacific are aware of, even as they — like we — worship what wealth might bring.