Accessibility links
Extreme Migrations Spell Safety For Arctic Shorebirds Arctic-nesting shorebirds have some of the longest migrations in the world, traveling from the southern parts of Africa and South America. A new study reveals that they may go the distance for good reason: to avoid nest-raiding predators. 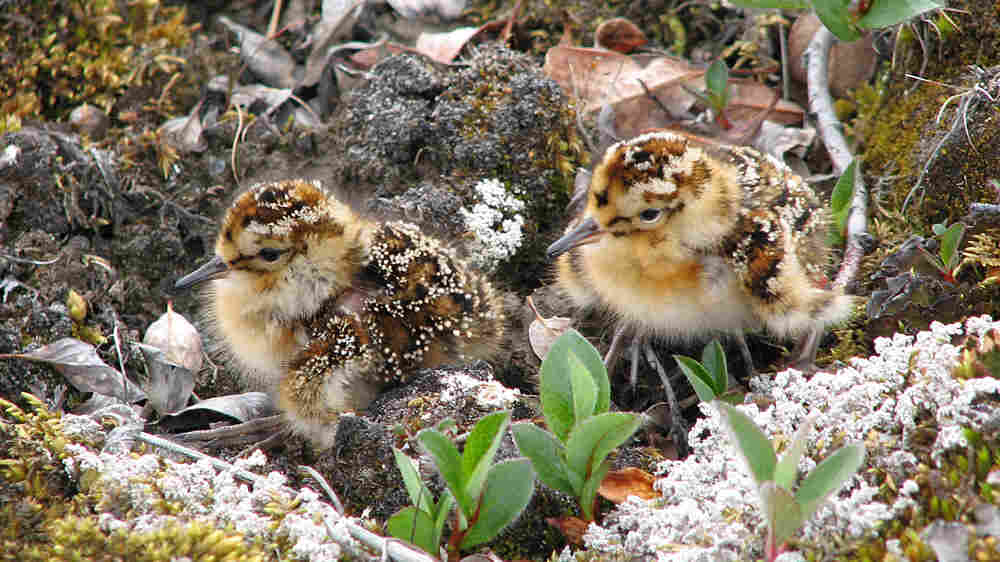 The further north an arctic shorebird flies, the less likely it is that a foxy predator will gobble the eggs in its nest.

A new study suggests that's one reason why some migratory shorebirds like the white-rumped sandpiper are willing to make exhausting annual journeys that can be more than 18,000 miles round-trip, from their wintering areas at the southern tip of South America to their breeding grounds in the Canadian Arctic. 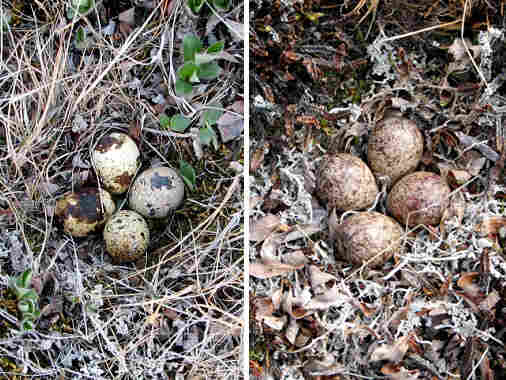 A Baird's sandpiper nest (left), next to an artificial nest (right). Researchers filled over 1,500 artificial nests with eggs and placed the them at shorebird breeding sites along a stretch of the Arctic, spanning more than 1,800 miles north to south. Laura McKinnon hide caption

"Their migration is a pretty amazing feat," says Laura McKinnon, a researcher with the University of Quebec at Rimouski, who notes that these little birds can weigh less than 2 ounces.

She wondered what drove the birds to go so far north. The Arctic region does offer benefits — like fewer parasites and more hours of summer sunlight — and McKinnon wondered if fewer egg-robbing predators might be another plus.

She and a group of colleagues tested that theory by building more than 1,500 artificial nests and placing them in seven shorebird breeding sites in Canada. These spots ranged from the subarctic to the high arctic regions, stretching about 2,000 miles north to south, from Akimiski Island to Ellesmere Island. Then they monitored the man-made nests to see how quickly predators like the arctic fox attacked.

They had to use artificial nests in order to control for factors that vary both between species and between individual birds, such as parental care and nest defense. 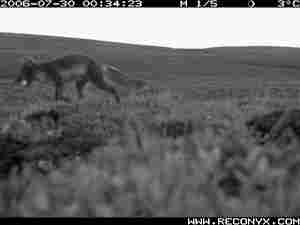 A remote camera captures an image of an Arctic fox preying on a nest. The fox is a major predator of bird nests in the Arctic. Courtesy of Laura McKinnon hide caption

Luckily, the artificial nests were relatively easy to make. "Shorebird nests are very, very simple. They are essentially just a small depression in the ground," McKinnon explains. "There's no twigs making a nest-cup structure, and there's no down. It's just eggs basically sitting on the ground." She and her colleagues could just make an indentation in the ground with the heel of their rubber boots, then add some eggs.

The research team used quail eggs, because they're similar in color and size to many species of shorebird eggs. But that meant getting thousands of quail eggs to remote Arctic locations. "Maybe a third of the eggs might be broken in transit," says McKinnon, who says the researchers had to carry the eggs in a cooler bag in their hand luggage on planes. "It's a little bit of a challenge to get them there in one piece."

The results of this study, published in the journal Science, show that if birds keep flying north, they do indeed face a smaller risk that their eggs will be eaten by a predator.

For example, if a bird flies past the most southern site, on Akimiski Island, and keeps going all the way to the northernmost site, on Ellesmere Island, says McKinnon, "it can reduce its predation risk by 66 percent."

"What I think we've shown is that it is possible that predation is also another one of the factors that can influence migratory behavior," she says. "It makes sense that birds would spend more energy, possibly, to head further north, if they have a better chance of producing young."

This study is unique, in part because it shows the predation risk over such a huge geographical area, says Olivier Gilg of the University of Burgundy in Dijon, France, who has previously studied the effects of predation on the population dynamics of lemmings in the Arctic. "I haven't seen anything similar in the past, especially not on such a large scale," Gilg says. "McKinnon's study is really amazing."

He notes that some shorebird species avoid breeding in areas that are free of lemmings, the major prey of arctic foxes. This is an additional piece of evidence suggesting that the birds' choice of breeding grounds is influenced by the risk of predation, Gilg says, because "in these places, foxes have a much higher predation pressure on birds, because they don't have these lemmings, which is normally their main prey."

Find Out More About Arctic Shorebirds On The Bylot Island Ecological Monitoring Website.