Accessibility links
Funds Raised for Obama Fail to Reach Candidate A recently converted Republican raised about $10,000 for the "Californians for Obama" campaign. None of that money has gone to the Barack Obama's presidential campaign. 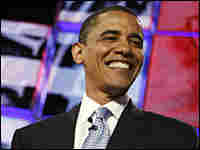 None of the money donated to "Californians for Obama" campaign has gone to the Barack Obama's presidential campaign. Stan Honda/AFP/Getty Images hide caption

A recently converted Republican has raised about $10,000 for the "Californians for Obama" campaign, but none of that money has gone to Sen. Barack Obama's presidential campaign.

A California reporter says Cash founded the unauthorized organization last year. She says his Web site is very official looking, and even mentions a fundraiser that includes a cruise to Mexico.