Accessibility links
Brazil's Traditional Beats Revamped in Rio Verge, a new record label, devotes its first release to a sampling of contemporary funk, jazz and hip hop sounds emanating from the slums of Rio de Janeiro. The socially conscious label returns some of the profits back to the struggling neighborhoods. 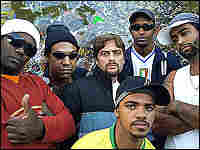 The lyricist of the band Movimento Na Rua turned from a life of crime to helping kids in the slums of Rio. Verge Records hide caption 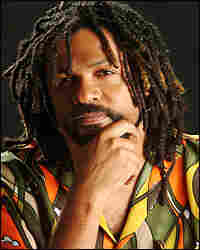 Hear songs from the CD:

There's new music coming out of the favelas — the slums — of Rio de Janeiro. It may sound a little like funk or hip-hop but it's rooted in Brazil's more traditional beats: samba and bossa nova.

A new label, Verge Records, has been created to not only record some of the local artists making this music, but to return some of the profits from sales back to the community. The money will go toward music education programs and the construction of recording studios in the favelas.

Emanuel Zunz is the founder of Verge Records, which has just produced its first compilation, called The Inspiring New Sounds of Rio de Janeiro. He tells Scott Simon that working with artists in the drug- and violence-filled neighborhoods can be intimidating.

"You have to know people when you are working in those places," Zunz says. "You come invited; you don't come uninvited. It can be a volatile environment."

The band Movimento Na Rua, featured on the new CD, is led by Samuca, once one of Rio's most notorious kidnappers. In the prime of Samuca's criminal career, Zunz says, he used to hold executives for ransom, but after he was jailed he turned his life around.

"Samuca's goal," Zunz says, "is to show the world what is going on inside the favelas, because these are marginalized communities forgotten by society. His second objective is to prevent kids from making the same mistakes he did."

Movimento Na Rua and the other bands represented on the CD are part of what Zunz says is a new trend in music.

"There's a musical movement that's happening not only in Brazil but in other countries like Cuba and South Africa," Zunz says. "People are taking hip-hop and urban music and blending it with their own traditional music, and coming out with something unique to that region."

Although the songs on The Inspiring New Sounds of Rio de Janeiro often talk about guns and the drug trade, there is at least one aspect of them, Zunz says, that makes them uniquely Brazilian.

"A lot of the tunes are about social issues but they're talking about them in a positive light. Despite all the hardships people face in Brazil people tend to be very optimistic."