Accessibility links
Guns, Tumors And The Limits Of The Human Eye What do an airport baggage screener and a radiologist looking for breast cancer have in common? Both suffer from the limitations of the human eye. A new study finds that when we're searching for rare things, like tumors and guns, they're a lot harder to see. 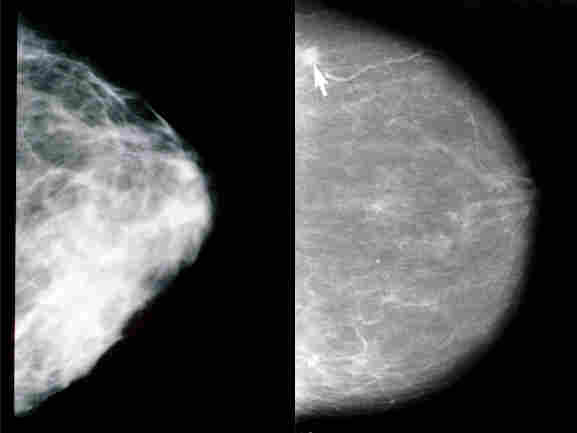 Radiologist Julianne Greenberg sees hundreds of mammogram images a day. Her job is to spot the rare and sometimes tiny cancers in the breast tissue. On the left is a healthy breast, and on the right is one with a tiny tumor. hide caption 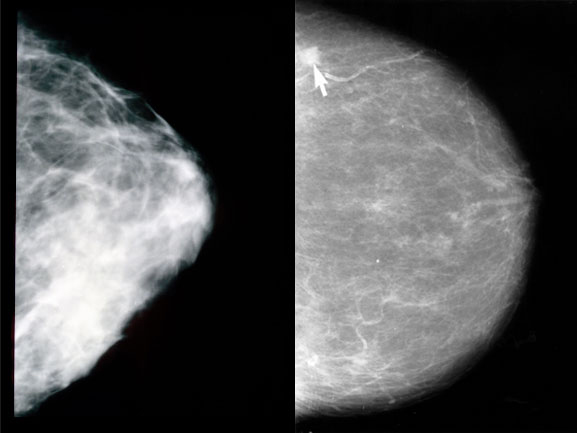 Radiologist Julianne Greenberg sees hundreds of mammogram images a day. Her job is to spot the rare and sometimes tiny cancers in the breast tissue. On the left is a healthy breast, and on the right is one with a tiny tumor.

Julianne Greenberg spends much of her professional life in a dark room only slightly larger than a closet.

There in the blackness, for up to two hours at a time, she sits staring earnestly into the room's only light source: three large computer screens filled with images of women's breasts.

Greenberg is a radiologist who hunts for breast cancer. Hundreds of times each day, she visually searches digitized black-and-white X-rays filled with beautiful, spidery images of breast tissue.

Her job is to find within this maze of delicately crisscrossed lines and small misshapen blobs a cancer that, more often than not, blends almost perfectly into the background. In other words, her job is to see something that is almost invisible.

In this respect, Greenberg's work is very much like the work of another class of professionals whose failures have recently dominated news headlines: airport baggage screeners. Like Greenberg, they must hunt through hundreds if not thousands of confusing visual images in search of targets that are extremely rare and frequently hard to distinguish.

Test Yourself: Visual Changes Can Be Hard To See

People tend to think that they generally see things happening around them, but research suggests you can miss large changes, even to nearby, clearly visible things. This phenomenon is called change blindness. Try it for yourself — click play, and in quick flashes you'll see an image, followed by the same image with a change. The test loops three times — see if you can tell what has changed.

A study published in the journal Current Biology looks into the problems involved in visually searching for exceedingly rare targets and comes to an unsettling conclusion: "If you don't find it often, you often don't find it," says study author Jeremy Wolfe. In other words, we are not very good at finding things that are rarely there.

In the wake of the attempted Christmas airliner bombing, we've spent a lot of time talking about new screening machines, technologies that we should or shouldn't use. But this new study suggests that the problem with the bombing attempt wasn't really the machines. The problem was us.

Finding A Needle In A Haystack

The odds Greenberg faces in her quest to locate a cancer among the images she views are daunting.

For every 4,000 images she searches (and she often searches hundreds of images a day) there will only be about 20 that have actual cancer in them. 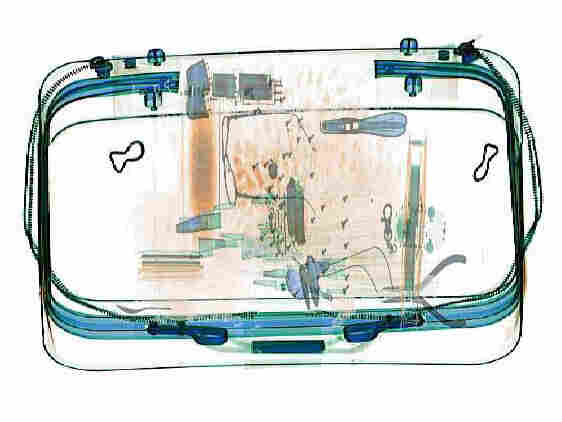 Baggage screeners look at thousands of bags every day, and it's rare that one would contain a weapon. But like spotting tumors, because weapons are rarely seen, sometimes screeners miss things. Courtesy of Jeremy Wolfe hide caption 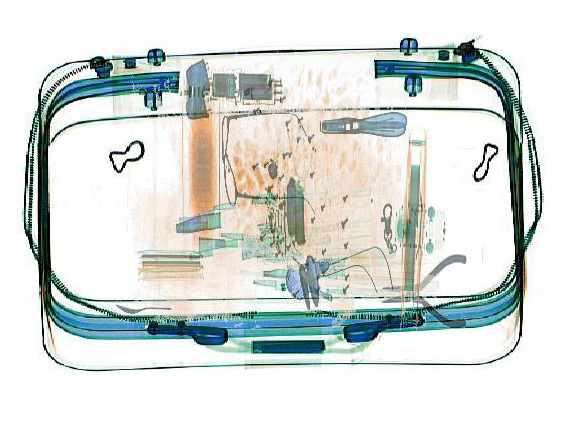 Baggage screeners look at thousands of bags every day, and it's rare that one would contain a weapon. But like spotting tumors, because weapons are rarely seen, sometimes screeners miss things.

"You're looking for a needle in a haystack," she says.

If anything, the odds are even worse if you are a baggage screener. Wolfe says a baggage screener can easily pass a lifetime without ever laying eyes on a real gun or knife or bomb tucked discreetly into someone's carry-on.

So when these threats finally do present themselves, how do we do in identifying them?

To test this, Wolfe, a professor of ophthalmology at Harvard Medical School and director of the Visual Attention Lab of Brigham and Women's Hospital in Massachusetts, conducted a series of experiments.

But when he took the exact same 20 bags and stuck them in a stack of 2,000 bags so that the targets showed up only 2 percent of the time, people got significantly worse. "All of a sudden, people were missing about 30 percent of the bags," Wolfe says.

Obviously, we don't want either our baggage screeners or our breast cancer screeners missing their target 30 percent of the time. So what can we do?

Wolfe doesn't know as much as he'd like about why people have trouble finding targets that appear rarely. But one thing he is certain of is that even when you swear to yourself that you're going to be hypervigilant and not make mistakes, it simply doesn't help.

Wolfe points out that over the years, he himself has taken many of his own tests.

"You know, I know what the probabilities are, and I know that I am trying to be as good as I can possibly be, and I still fall victim to the same effects. [This is] because the chunks of my brain that are doing this ... are 'cognitively impenetrable.' You can't talk yourself out of it. It just happens ... automatically."

The Limits Of The Research

Among people who study visual search, there's apparently widespread acceptance of what's now known as the "prevalence effect" — the idea that people often miss a rare thing, at least when tested in the lab.

The real question, says Kyle Cave, a cognitive researcher at Amherst University, is whether or not the effect is as large in the real world — whether a well-trained, full-time expert like radiologist Julianne Greenberg will make the same mistakes when she sits in her little closet day after day.

Cave says there's not yet a definitive answer, but he points to a famous research study from the 1970s. In that study, people were trained for weeks on end to look for certain letters in the alphabet among a garble of letters. Eventually, says Cave, they came to be incredibly good at it.

"In fact, when they read the newspaper, I've heard accounts that they had trouble ignoring those letters. The letters popped out even when they didn't want them to. It became automatic."

Wolfe is now working on another study with the Department of Homeland Security that is testing the prevalence effect in people currently working as baggage screeners, which should bring more answers about real-world effects.

In the meantime, perhaps the best thing to do is to adopt more humble expectations of the people who stand at the front lines of the "needle-in-a-haystack" search. Baggage screeners, like the rest of us, are far from perfect.