Accessibility links
U.S. Exports Cultural War To Uganda The battle over homosexuality has torn apart Christian churches in the U.S. American ministers helped bring the same debate to Uganda, and now the country is facing the potentially deadly consequences. 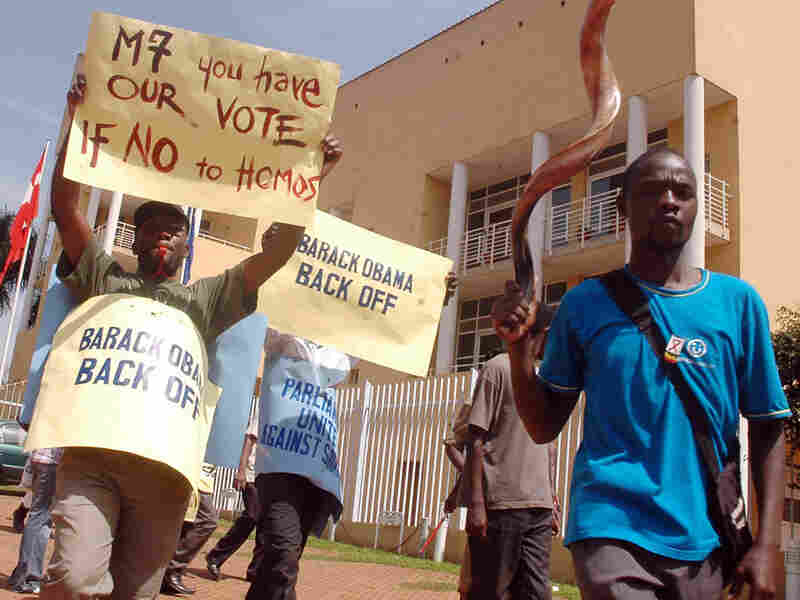 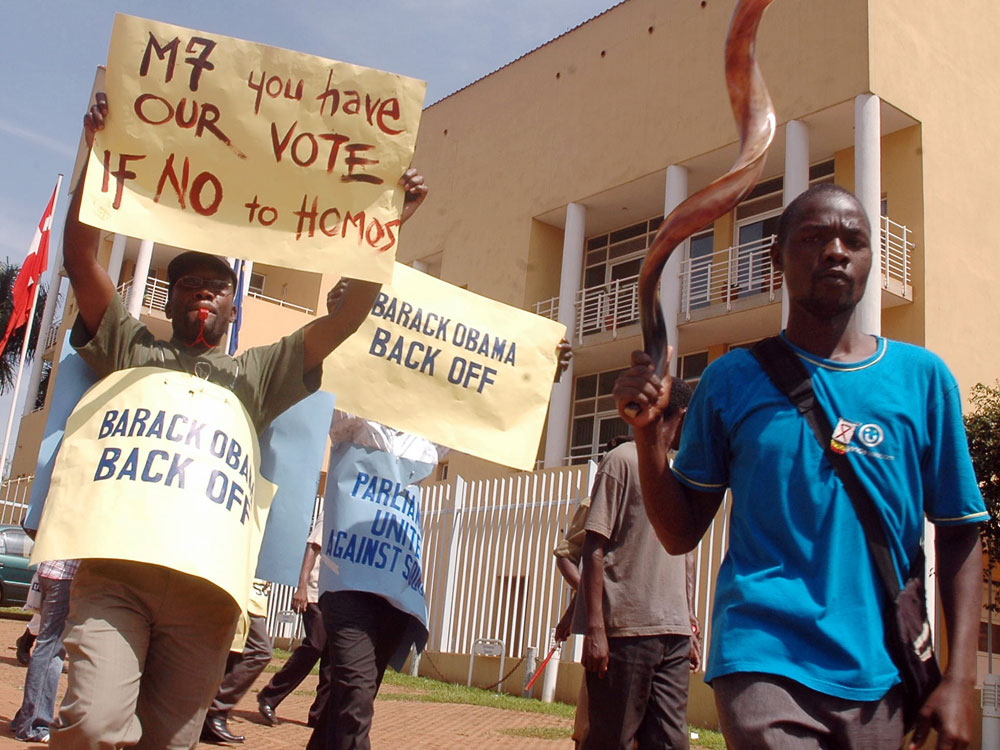 Members of the Uganda National Pastors Task Force Against Homosexuality demonstrate in front of the Royal Danish Embassy in Kampala, Uganda, in December.

The battle over the Bible and homosexuality has torn apart Christian churches and entire denominations in the United States. But what happens when that culture war is exported to other countries? Ugandans are finding out — with potentially deadly consequences.

Uganda is now considering a bill that would impose the death penalty or life in prison on gay men and lesbians for some homosexual acts.

To understand how this bill came to be, one needs to know the story of King Mwanga. In 1886, Uganda's king ordered some two dozen male pages to have sex with him, and when they refused because of their Christian faith, he ordered that they be burned to death. Every year on June 3, Ugandans celebrate a national holiday honoring the Christian martyrs and deploring the pedophile king.

Into this climate stepped Scott Lively, an American evangelical and president of Defend The Family International. In March 2009, Lively traveled to Uganda to speak, along with two other Americans from "ex-gay communities," about the "gay agenda."

Then Lively, who has authored a book called The Pink Swastika, played into the fears raised by Uganda's history.

"Male homosexuality has historically been, not adult to adult; it's been adult to teenager," he said. "It's called pederasty — adults sodomizing teenage boys."

Later in his trip, Lively addressed the Ugandan Parliament on the gay issue, recommending therapy to help people leave their gay lifestyle. A few months later, a bill was introduced to execute people for some homosexual acts.

Lively says he never suggested putting the death penalty into bill, and he says he thinks the bill goes too far.

"But the fact that they're willing to stand up and say, 'No, we are not going let you homosexualize our country!' — that is a step in the right direction, and I would hope that it would spread to other countries," he says.

Lively is considered a fringe player in the American culture wars. But in recent years, mainstream evangelicals in the U.S. have forged close spiritual and financial ties with their biblically conservative African brothers. For example, dozens of Episcopal churches and even some dioceses have left the U.S. church to go under the authority of Anglican bishops in Uganda, Nigeria and Rwanda — primarily over the gay issue.

Jim Naughton, a former canon in the Episcopal Diocese of Washington, D.C., says their message plays one way in the U.S., but differently in a place like Uganda. And they should have known.

"If you go to countries where there's already a great deal of suspicion and maybe animosity towards homosexuals, and begin to tell people there, 'Well, actually these people are child abusers, they're coming for their children, that they're the scourge that is being deposited on you by the secular West,' you're gonna get a backlash." Naughton says it's like "showing up in rooms filled with gasoline, and throwing lighted matches around and saying, 'Well, I never intended fire .' "

Many U.S. evangelicals, including Lively, say they are "mortified" by the death penalty provision. Naughton doesn't buy it.

Megachurch pastor Rick Warren is a case in point. Warren, author of The Purpose Driven Life, has extensive ties with religious leaders in Africa, including Uganda. Initially, he refused to condemn the bill. Finally, two months after the bill was introduced, he urged pastors in Uganda to oppose it.

"We are all familiar with Edmund Burke's insight, 'All that is necessary for evil to triumph is for good men to do nothing,' " Warren began. He explained his silence by saying, "It is not my role to interfere with the politics of other nations," then stated that the bill "is unjust, it's extreme, and it's un-Christian."

If Warren was slow to condemn the bill, other Christian conservatives have yet to do so, says Warren Throckmorton, who teaches psychology at Grove City College and has been monitoring U.S. evangelical response. He says some of the Christian groups most publicly tied to Uganda have been the quietest. Joyce Meyer Ministries, Oral Roberts University, the College of Prayer in Atlanta — all have close ties and declined to express reservations about the death penalty.

"Silence is often interpreted as consent," says Throckmorton, who is himself a conservative evangelical. "So I think those kinds of responses may lead those individuals in Uganda to think that perhaps what [they're] doing really is according to the evangelical faith."

"The question is, what's the most effective way to deal with it?" asks Martyn Minns, bishop of the Convocation of Anglicans in North America, a group that broke from the Episcopal Church and is now aligned with Nigeria.

His group has been working behind the scenes to remove the death penalty from the bill. But Minns also says Uganda has a right to resist the wave of gay activism that he says is flooding in from the West.

"It's hard for any of us who have not lived under colonial rule to realize how offensive it is for people who have won that freedom to now basically be told, 'You're fools. You're ignorant. One day you'll grow up and be like us,' " Minns says. "That comes across in a very patronizing way."

This week Uganda's president called for the bill to be withdrawn, saying it was harming the country's foreign policy. The sponsor has refused to do so, and it is expected to be considered in February. But no matter what happens, the story of Uganda is considered a cautionary tale of what can happen when the West's religious debates are transplanted to another culture.