Accessibility links
Pride And Privilege — And Prejudice — On Stage In U.S. dramas, African-Americans are often limited to portraying impoverished characters, like slaves or street thugs. So Lydia Diamond wrote a play about the opposite: An extremely wealthy black family vacationing on Martha's Vineyard. 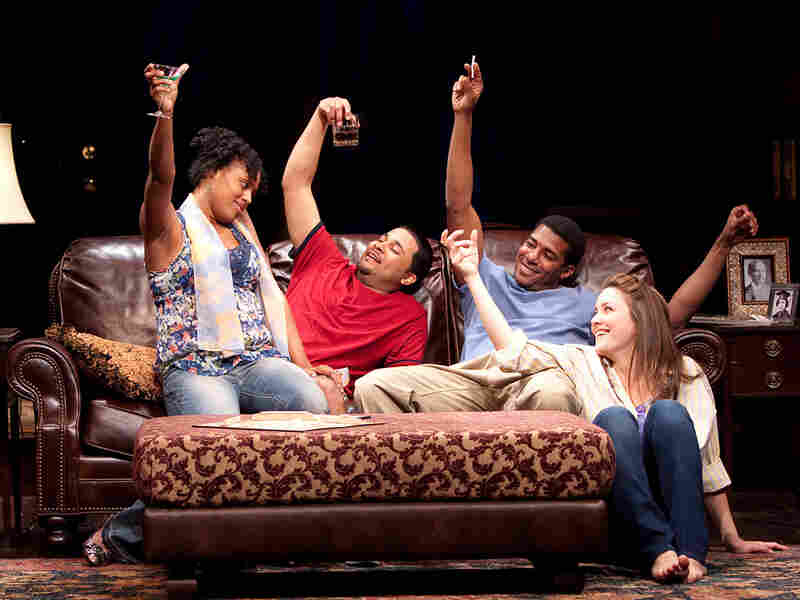 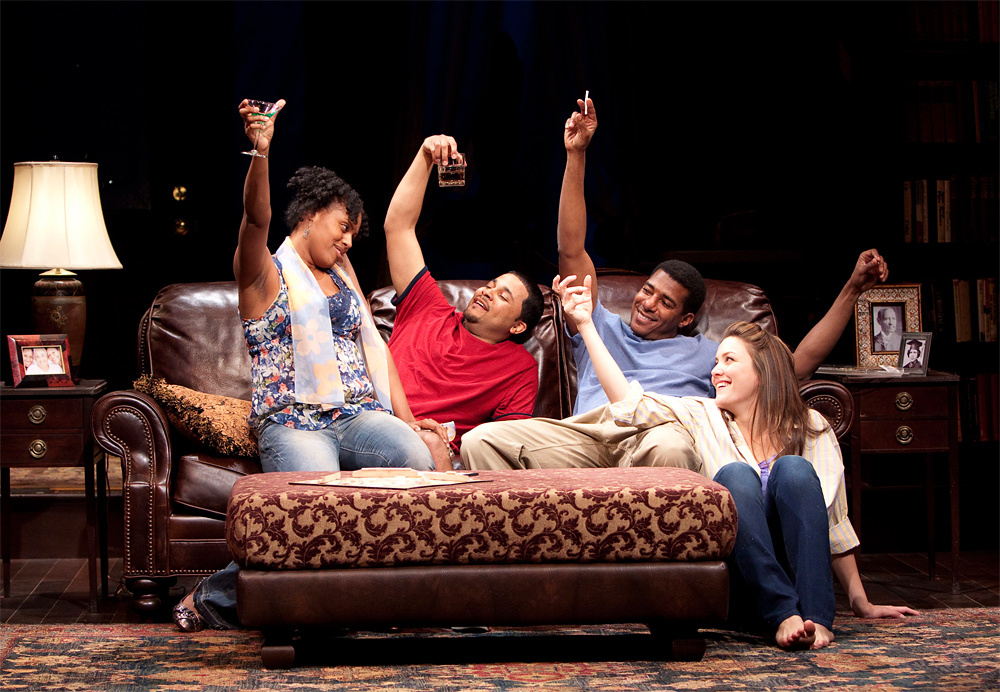 Nikkole Salter as Taylor (from left), Jason Dirden as Kent, Billy Eugene Jones as Flip and Rosie Benton as Kimber in Stick Fly at Arena Stage.

In U.S. dramas, African-Americans are often limited to portraying impoverished characters, like slaves or street thugs. So Lydia Diamond wrote a play about the opposite: An extremely wealthy black family vacationing on Martha's Vineyard.

The family in Stick Fly is old money — think the Kennedys. And yet, as Diamond says, "They live in a world that doesn't even really know they exist."

Take for instance the scene in which Flip, a plastic surgeon, tells his family about a time he was in Pottery Barn and a white salesgirl followed him around.

"What am I going to steal from Pottery Barn?" he asks.

"This isn't unlike the conversations that I've had with my own family," Diamond said. "Privilege doesn't necessarily shelter them from the prejudice that's woven into the fabric of our society."

Diamond didn't grow up in a family with a lot of money. But her mom was an academic — and that, she says, gave her access to the privileged and the powerful.

So when Diamond went into theater, she got tired of seeing mostly downtrodden black characters.

"I started out as an actress," Diamond said, "and I remember thinking, 'I wish I could be in a play where I got to wear pretty clothes and didn't have to be in gunnysack.'"

There are no gunnysack-wearing slaves in Stick Fly. Nor are there any drug dealers. In this family, there are two doctors, a socialite, and a writer who's dating an entomologist.

And for the Pottery Barn scene when the doctor resents being followed around by a salesgirl — because he's a plastic surgeon — his superiority offends the family's maid.

With Stick Fly, Diamond makes the point that there are complex individuals — within a race, within a social class, and within a family, says theater director Derrick Sanders.

"The different hues of gray in terms of race and class, and how they divide, is something that is very delicate," Sanders said. "And I think Lydia nailed it."

Sanders is co-founder of Congo Square Theater in Chicago, where Stick Fly premiered.

Years ago, Diamond said, "America has a real comfort zone with seeing African-Americans in certain ways" — in short, seeing them as oppressed.

Diamond decided there was enough of that already. And she says she said to herself back then, "I will never write a slave play!"

But Diamond has since loosened up. Her most recent play is about the true story of Harriet Jacobs, a slave who hid in an attic for almost seven years.

"I've had to sort of back off of my real judgment that 'The last thing we need in the world is another play about slaves,'" Diamond said. "Because I think there's something actually very interesting about the way we haven't been taught our own history."

Diamond's play about Harriet Jacobs is currently at the Underground Railroad Theater in Cambridge, Mass. Over the next few months, Stick Fly will be on stage in Washington, D.C., Boston and Houston.