Accessibility links
Disillusionment Strong In Post-Revolution Ukraine Ukraine holds its next presidential election Sunday, five years after thousands of Ukrainians protested a tainted vote in what became the Orange Revolution. Ultimately, the results were thrown out and the opposition won the new election. But just a few years later, the revolutionary mood has soured. 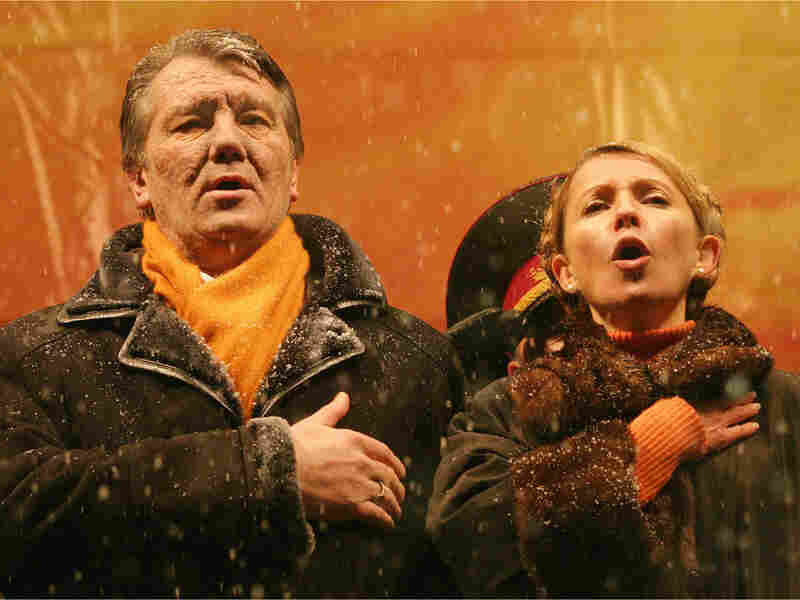 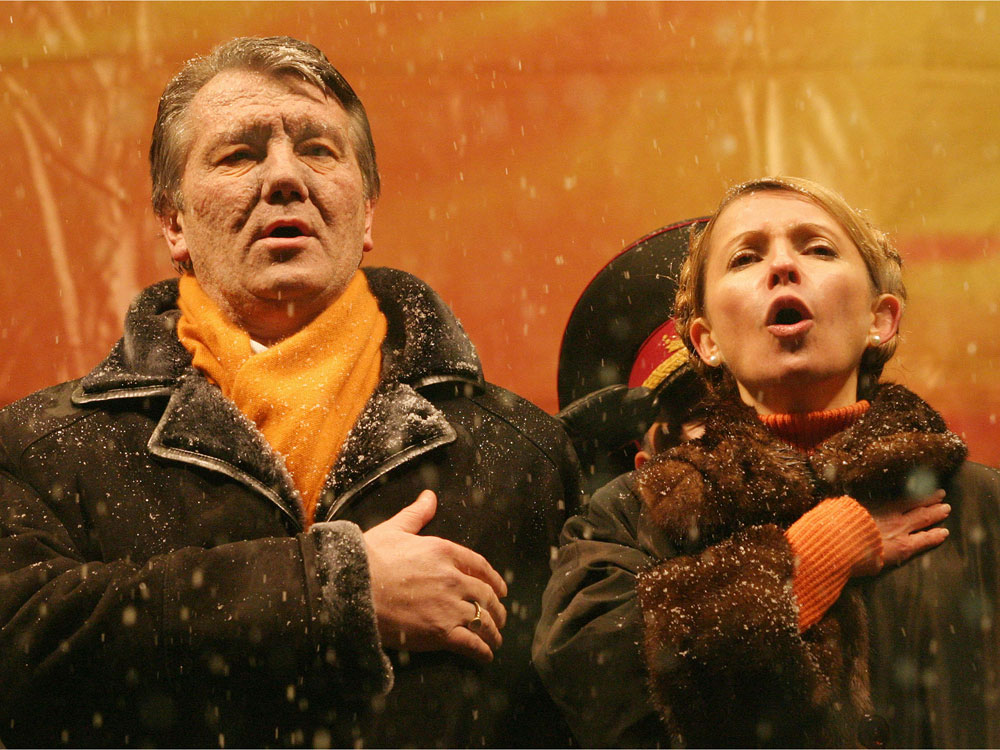 Viktor Yushchenko and onetime political ally Yulia Tymoshenko sing the Ukrainian national anthem in Kiev's central Independence Square in November 2004, during protests that became known as the Orange Revolution and that led ultimately to Yushchenko's election.

Five years ago, thousands of people in Ukraine — many young students — took to the streets protesting a tainted election in what became the Orange Revolution. They celebrated when the nation's Supreme Court threw out the results and ordered a fresh vote.

Images from the capital, Kiev, were beamed around the world. And some world leaders saw the story of a former Soviet republic embracing true democracy.

This Sunday, five years later, Ukraine holds its next presidential election. But the revolutionary mood in Ukraine's capital has soured.

The sounds from those cold nights in Kiev's Independence Square still seem to echo through the streets. The man who symbolized the revolution for Westerners was Viktor Yushchenko, his face left green and pockmarked by a mysterious poisoning. He became president.

But the voice that people in Ukraine remember is that of his ally, Yulia Tymoshenko. She stole the show. Join us in the streets, she told the crowd, until a fair election is held. 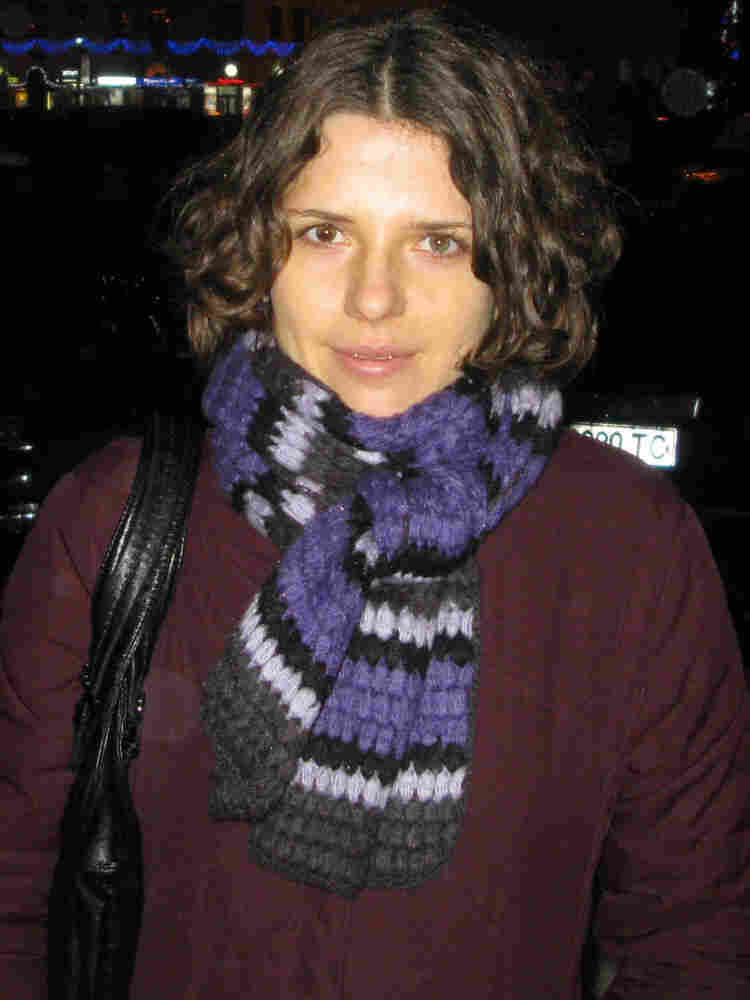 "The unity of 2004 is broken now," says Svetlana Osipchuk, who participated in the 2004 protests. David Greene/NPR hide caption

Svetlana Osipchuk was there in the square in 2004.

"Yes, I saw her. I saw them all. It was exciting," the 24-year-old graduate student says.

Osipchuk was in Kiev this week, at the university where she gathered with other students five years ago. But now, as the new election looms, her feelings have changed.

That unity broke quickly. After taking office, Yushchenko made Tymoshenko prime minister. But the two soon became rivals. And today, many of their once ardent supporters say the economy is in bad shape, politics remain corrupt, and that revolutionary spirit seems gone. They blame Yushchenko and Tymoshenko.

Although both are among the 18 candidates in Sunday's election, Osipchuk, for her part, says she won't vote for either of them. Still, she looks back to 2004 with no regret. 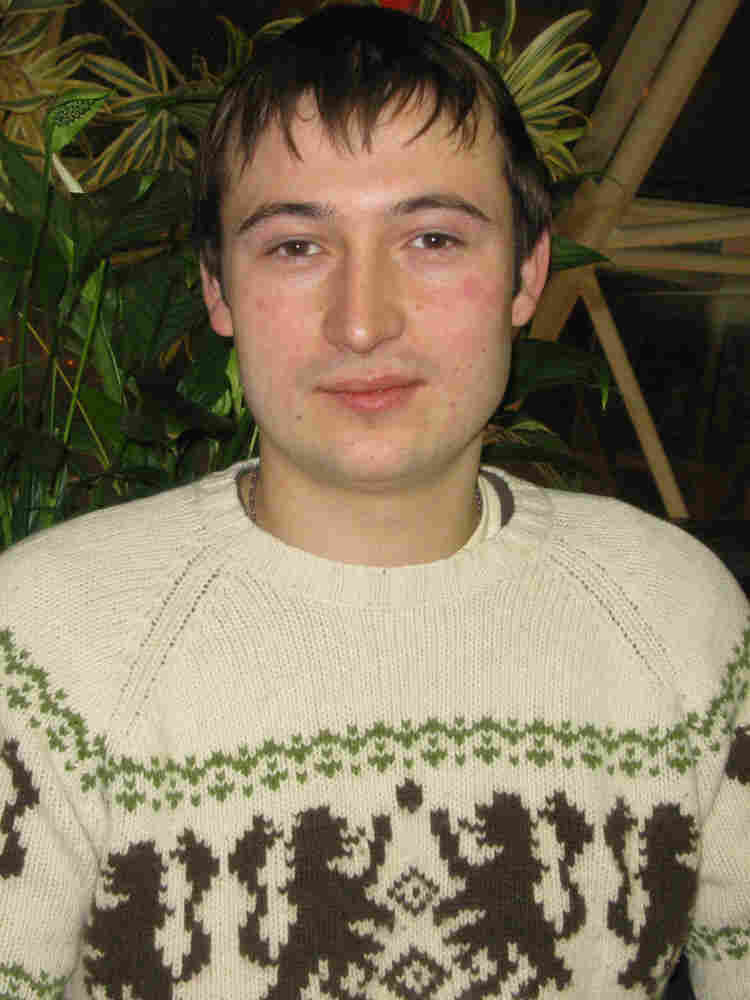 Nazar Pervak says he has lost faith in politics, but he also says there have been positive changes since 2004. David Greene/NPR hide caption

Mixed emotions are easy to find in Kiev these days.

Attorney Nazar Pervak was also a student in 2004, and he recalls stuffing wads of newspaper beneath his T-shirt, because he feared the army would start firing rubber bullets. His bravery has turned to embarrassment now. The 27-year-old says the leaders he brought to power have shown their greatest skill is bickering.

But if he has lost faith in politics, he points to changes in Ukraine that he does like.

"Before 2004, people, especially those working in state institutions, were afraid to show their political and social views in public. Now it has changed. The people are more open and not afraid," he says.

Pervak says he is not worried, even if the upcoming election turns back the Orange Revolution. The candidate leading in some polls is Viktor Yanukovych, the target of the Orange Revolution. He was the winner of the rigged election in 2004 that triggered the protests. He still has significant backing in eastern Ukraine and a realistic chance to stage a comeback and turn the results of that popular revolt upside down. 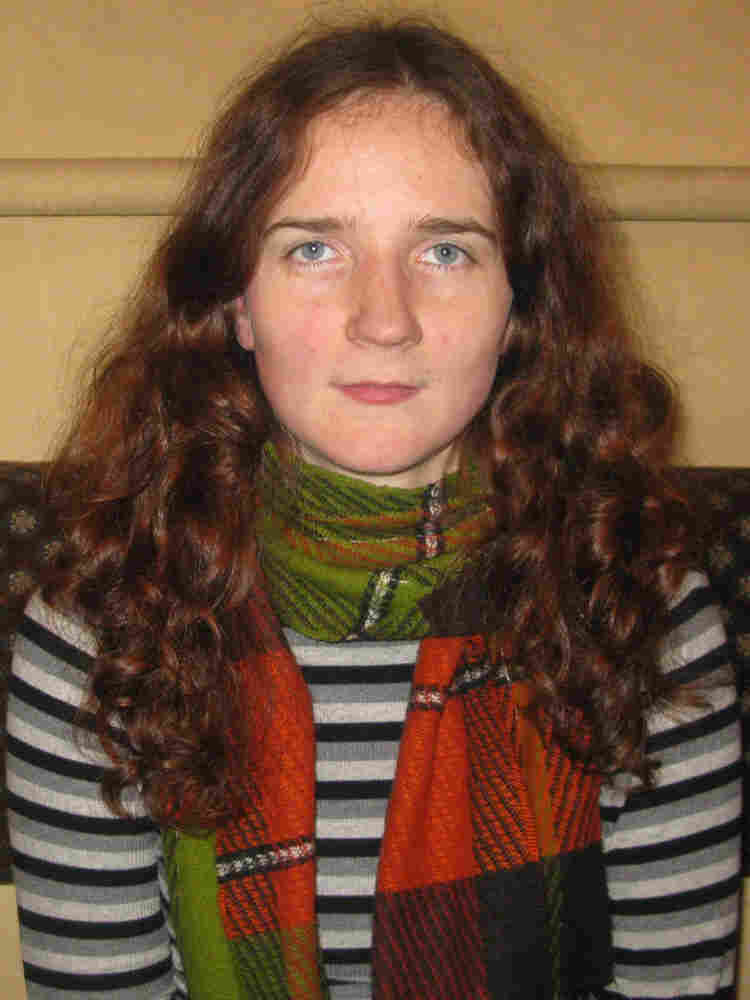 Maria Moshkovska says the revolution has come to "nothing." And yet, she says she would never discourage people for fighting for what they believe in. David Greene/NPR hide caption

That would be tough to swallow for another person on Kiev's Independence Square, Maria Moshkovska.

She points out exactly where she stood in 2004. Like so many veterans of the Orange Revolution, the political consultant says she has been frustrated by all the political infighting. But maybe, she says, politicians in her country have learned some lessons.

"Because I'm Ukrainian, I always like to think there is a chance," she says.

Even though the Orange Revolution has, in her words, come to "nothing," Moshkovska says she would never discourage young people from taking to the streets when they feel it's right.

"To fight to get freedom is very important for people. If the question will be to come or not to come, I'll not stay home," she says.

Despite their misgivings, all three veterans of the revolution expect to vote in Ukraine's presidential election. But none of them say they are happy about the choices they'll have to make.