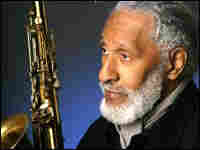 Ranking with John Coltrane and Coleman Hawkins as one of the all-time great tenor sax players, jazz legend Sonny Rollins has been recording fiery, passionate and intelligent music for nearly 60 years.

Rollins began playing at an early age, learning both piano and alto sax before switching to tenor at 16. Within five years, he found himself cutting records with jazz greats such as Miles Davis and Thelonious Monk, in addition to recording his own material as a bandleader. In 1956, he released his landmark album Saxophone Colossus, which is widely considered to rank among the finest jazz discs of the era. Never content to remain in stasis, Rollins' records in the '60s and '70s explored new and diverse styles of music, incorporating Latin, R&B, pop and funk rhythms into his signature sound. More than most of his contemporaries, Rollins remained relevant in the '80s and '90s, continuing to release interesting and intensely melodic records that saw him make a graceful transition into one of jazz's elder statesmen.

Released on his own Doxy label, 2006's Sonny, Please marks the end of Rollins' epic 35-year stint at Milestone Records. It's fitting, then, that he sounds more revitalized than he has in years, especially on the seemingly effortless "Nishi."