Accessibility links
Running a Rafting Company Has Twists, Turns Dan and Maureen McDonald loved being guides on Maine's Penobscot River. But when they started their own whitewater rafting company, they found running a small business can be a lot more challenging than running the rapids. 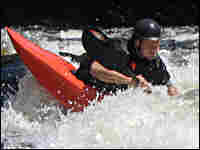 Sarah Herzig has the look of wide-eyed exhilaration that comes from swimming and tumbling through some cold, mountain whitewater. The 26-year-old has just slalomed down a natural water slide on Maine's Penobscot River.

"It feels like you're in a washing machine," she exclaims. "You're not really sure what you're doing. You just start swimming real fast."

Herzig is rafting and swimming the Penobscot on a family vacation.

For Dan and Maureen McDonald, riding the rapids is their job. The McDonald's are the founders of Penobscot Adventures, which guided Herzig's trip. As part of our series on how people who work for themselves make ends meet, NPR is focusing on the McDonalds as they earn a living on the fast whitewater of Maine.

McDonald and her husband founded their rafting company five years ago. She had worked as a raft guide during her summers in college. She says she noticed that a lot of the customers with 9-to-5 jobs weren't having as much fun at work as she was.

"As soon as they get on the river, it's like a fog has lifted," she says. "I decided very early in my career that I don't want to be in that fog."

McDonald also wanted to work out in nature. "If you can do what you love and make money at it, that's the American Dream, as far as I'm concerned," she says.

McDonald is 30. Her husband, Dan, is 31. He's also an experienced river guide and had risen to the level of general manager of the rafting company he was working for. But as they thought about settling down and having children, they knew they needed to make some more money. So they decided to start their own company.

But getting started is pricier than you might think. There's the cost of the rafts, the rent for a cabin to use as an office, and the purchase of a couple of used vans and trailers to ferry the customers and the boats back and forth from the river.

And then there are the allocations, which are like taxi medallions: They give the rafting companies the right to bring a certain number of people down the river. The state limits the number of rafters to protect the environment. Dan McDonald says allocations aren't cheap.

That gives the McDonalds the right to bring 64 people down the Penobscot on weekends.

The companies can buy and sell the allocations amongst themselves. But there's a catch: if the McDonalds don't fill 80 percent of their allocations over a five-year period, the state can take them away, and the McDonalds would lose their money.

Swimming with the Big Corporate Fish

According to Dan McDonald, six years ago, there were 22 rafting businesses on this river. Today, there are only eight. The bigger rafting companies have been buying up some of the smaller ones, and a lot of the less professional outfits have just gone belly up.

One of the tricks to surviving, he says, is finding and holding onto the good raft guides. Most guides only last two or three seasons; Dan McDonald says some only take the job so they can drink and pick up girls. A good raft guide can command $100 a day plus tips. Many of the best have been doing this for 10 years or longer. Some are teachers. One is a state legislator during the off-season.

Maureen McDonald says this summer, most of their business has been repeat customers.

On average, they charge $72 a person. So on a good day in mid-summer, with a bunch of full boats, they might clear $1,300 after paying for guides, food, insurance and fees. But some days, only five customers show up. They still have to make their loan payments, which are around $4,000 a month. Dan McDonald says in the winter, it's hard.

"It's a seasonal business," he says. "When you're making so much money so fast, you think it's going to last forever."

But, come December, he adds, it's gone.

Adding up all their costs and loan payments, last year the McDonalds together only made around $20,000 on the rafting business. And that's after working 14-hour days, seven days a week, during the peak summer season. Dan McDonald does some carpentry work in the winter, while Maureen sometimes waits tables.

Still, the company is growing about 25 percent a year. The McDonalds have already managed to pay off most of their loans, and they have refinanced the rest to bring down their payments. So a few years down the road, with that debt off their backs, they will probably be making closer to $100,000 a year.

And that has them thinking about the next stage of their adventure on the river. Right now, they are looking for a little piece of land to build a lodge on, which they hope to rent to people who come up to go rafting and kayaking. And in the future, they are thinking about starting up a snow mobile business, to keep the money coming in all winter.