Accessibility links
Indian Territory: Tracing the Path to Oklahoma Nearly one in 12 Oklahoma residents is Native American. Most of their ancestors were forced from their land in the Southeast and Northern regions of the United States and resettled in Indian Territory — present day Oklahoma. 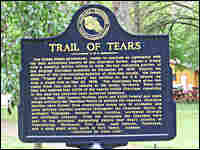 The Cherokee were forcibly removed from their land in Georgia. Their 1,200-mile trek to present-day Oklahoma is known as the "Trail of Tears." Amy Walters, NPR hide caption 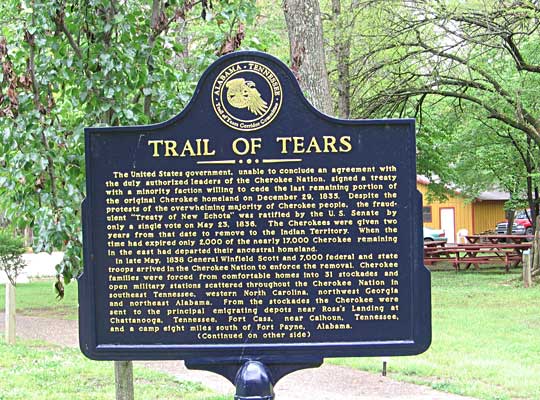 The Cherokee were forcibly removed from their land in Georgia. Their 1,200-mile trek to present-day Oklahoma is known as the "Trail of Tears."

About one in 12 residents of Oklahoma is a Native American — a higher percentage than in any other U.S. state.

These demographics are in large part the fruits of America's 19th-century expansion to the South and West. As white settlers sought more land to harvest cotton, they encountered an obstacle: The Cherokee, Creek, Choctaw, Chicasaw and Seminole nations already lived on the lands in question.

From 1814 to 1824, Andrew Jackson, then a military commander, took the lead in negotiating treaties that traded the Indian-held lands that whites desired for plots further West. The U.S. acquired parts of Georgia, Tennessee, Mississippi, Kentucky and North Carolina, as well as three-quarters of Alabama and Florida.

Tribal leaders agreed to the treaties in hopes of preserving peace and retaining some of their land. Those hopes were dashed in 1823, when the Supreme Court ruled that Indians could not hold title to lands within the boundaries of the U.S.

Some tribes in the southeastern U.S. voluntarily relocated westward after the Supreme Court decision. Many more resisted — some by attempting to assimilate or cooperate with white settlers, others through defiance and even warfare.

In 1830, Congress passed the Indian Removal Act, which authorized the U.S. to set aside lands west of the Mississippi River for tribes. Another act, passed in 1834, created what became known as Indian Territory; it included modern-day Oklahoma.

The laws helped set the stage for mass, forced migrations of tribes, as the U.S. government claimed their lands in the North and East by force. Within less than five decades, more than 60 tribes had willingly or forcibly relocated to Indian Territory.

In one of the most infamous forced migrations, bayonet-wielding U.S. soldiers evicted thousands of Cherokees from their lands in Georgia. At least 4,000 Cherokee are believed to have perished during a grueling 1,200-mile trek known as the "Trail of Tears."

Indian Territory itself didn't last long. The growth of railroads brought more white settlers west of the Mississippi. As the U.S. population swelled, Congress opened large swathes of the territory for settlement.

By the early 20th century, Indian Territory had been abolished. The remaining lots of land were reassigned from tribal entities to individual Indians. That made it possible for Oklahoma to gain statehood in 1907, but it also scattered Indian holdings.

Today, more than three-dozen federally recognized tribes live in Oklahoma. Before statehood, U.S. authorities and tribal leaders had agreed that tribal governments would be dissolved. Nonetheless, tribes continue to hold limited sovereignty on their lands.